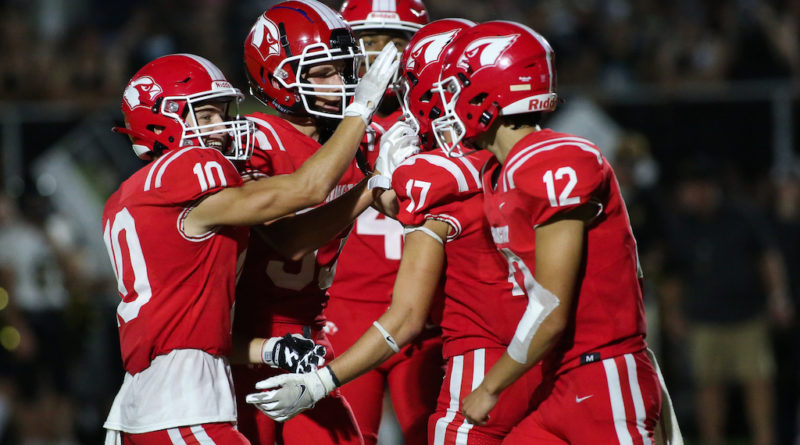 By Steve Andrews I Photos by Sadie Rucker

FARMINGTON — The fireworks started early and often in the Battle of Highway 62 on Friday night, as Farmington rallied from an early deficit with 30 consecutive points in the first half to topple arch-rival Prairie Grove, 56-27.

Sophomore quarterback Cameron Vanzant accounted for five of the Cardinals’ touchdowns, passing for a pair and running in three more. He completed 15 of 23 passes for 145 yards.

“Cameron comes to work every day,” first-year Farmington coach J.R. Eldridge said. “He always has a positive attitude and was able to manage the game for us. He’s got a great mentality for a sophomore.”

The Cardinals (2-0) put points up first, when Zach Ralston recovered a Prairie Grove fumble on the Tigers’ first play from scrimmage and rambled 12 yards to paydirt for a 7-0 advantage.

Prairie Grove (0-1) wasted little time getting even on the second play of the ensuing drive, as Colin Faulk took a pitch around the right end and scurried 75 yards down the sideline to make it 7-7, just 19 seconds into the game.

After Farmington turned the ball over on downs at the Prairie Grove 23, Conner Whetsell put the Tigers up 14-7, taking a handoff on a counter play and outrunning the Cardinal defense down the left sideline.

Vanzant’s 1-yard run capped a 9-play Farmington drive and tied the game at 14-14 midway through the first quarter.

The Cardinals then cranked out three touchdowns and a field goal in the final 4:37 of the first half.

“Our guys never lost heart, and they kept putting on more steam, and decided whatever phase wasn’t working, the other phase was going to pick up for them,” Eldridge said. “I’m really proud of our guys tonight. Our coaches did a great job on the sideline, and our players did a great job responding to some adverse situations early.”

Vanzant connected with Caden Elsik on a 30-yard touchdown, then after forcing a three-and-out, hit Devonte Donovan for a 20-yard scoring strike for a 28-14 lead.

The rout appeared to be on when Prairie Grove failed to secure then ensuing kickoff, allowing Farmington to pounce on it at the Tiger 4-yard line. Myles Harvey needed just one play to bust up the middle for the score with 53 second to play in the half.

“I think we just out-uglied them,” Prairie Grove coach Danny Abshier said with a slight grin. “We just made too many mistakes, and we have to find a way to fix those. They just played better than we did.”

The Cardinals actually forced another punt with 19 seconds left. And after Vanzant hit Tate Pickens on a quick 47-yard pass, kicker Luis Zavala booted 35-yard field goal as time expired to make it 37-14 at the intermission.

“I felt really good about how we were able to finish out that first half,” Eldridge said. “Getting that field goal at the end was big, and I’m just so thankful that we’ve got a bunch of guys that are willing to keep fighting.”

After losing its fifth fumble of the night early in the third quarter, Prairie Grove was finally able to take advantage of a Farmington miscue when Ethan Miller scooped up a Cardinal fumble and returned it 61 yards for a score.

Vanzant tacked on another 4-yard TD  for Farmington late in the third, but Whetsell was able to break off another long run for the Tigers, 83 yards to cut the lead to 44-27. Whetsell finished with 163 yards rushing on just three carries.

Farmington put the game away with two more touchdowns in the fourth quarter. Vanzant scored on another quarterback keeper, then, as the Cardinals were trying to run out the clock late, Kanye Taylor broke loose for a 43-yard jaunt to the end zone.

Although he didn’t score in the game, senior tailback Caden Elsik was the Cardinals’ primary workhorse throughout, carrying the ball 27 times for 148 yards.

Faulk tallied 101 yards on five carries in the first half for the Tigers.

“I think Farmington’s depth and two-platooning really got to us in some places,” Abshier said. “I can probably blame myself for that for not giving our guys enough conditioning. But our guys fought through it until the end of the game, and didn’t lay down.”

Farmington will travel to Springdale next Friday night, while Prairie Grove travels to Pea Ridge.