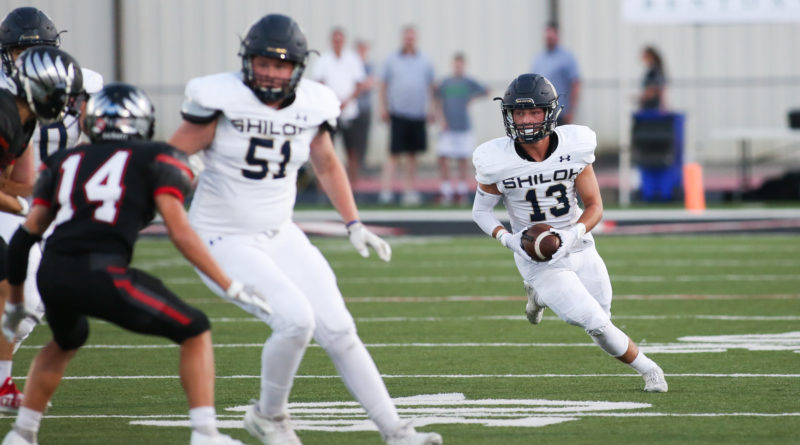 PEA RIDGE — Coming off the Class 4A football state championship a season ago, Shiloh Christian didn’t appear to miss a beat Friday night, taking a 49-0 lead in the second quarter, en route to a 55-13 victory over Pea Ridge.

Returning junior quarterback Eli Wisdom was in control early and cashed in often, accounting for four touchdowns against the Blackhawks — two on the ground and two through the air. And that was before he was replaced by backup Caleb Anderson with four minutes left in the first half.

“It all started in the summer, really, as we prepared for this game,” said Wisdom, who completed 5 of 9 passes for 218 yards and ran three times for 43 yards. “The guys on our team bust their butts every single day. I was so comfortable out there, because my O-line gave me all the time I needed back there in the pocket. So, it was awesome.”

The Saints finished 2020 with a 14-1 record and their eighth state championship, defeating Rivercrest, 58-20, for the 4A title in December. Saints coach Jeff Conaway knows his team has to stay focused to make a run for a repeat title.

“I told our guys coming into this year that we just need to worry about us and how we practice and approach every day,” he said. “Last year’s team doesn’t give us touchdowns. They don’t give us defensive stops. So, we’ve really got to focus on doing it ourselves, with this year’s team, and hopefully we can do something special again.”

It didn’t take the Saints (1-0) long to rev the motor against Pea Ridge (0-1), as Bo Williams took the opening kickoff and returned it 41 yards to the Blackhawks’ 26. On the first play from scrimmage, Wisdom connected with Cooper Hutchinson to put Shiloh up 7-0, just 19 seconds into the game.

“We have a mentality in all three phases of the game that we want to attack, and I thought our special teams did a phenomenal job tonight,” Conaway said. “Our offense is explosive, and when you can stop people like our defense does, it makes for a fun night.”

Pea Ridge mounted a 10-play drive on its opening series but turned the ball over on downs at the Saints’ 26.

Wisdom hit Bodie Neal on a 65-yard bomb, then weaved his way to the end zone on a keeper up the middle to make it 14-0.

Pea Ridge sophomore quarterback Gavin Dixon had a solid debut as the starter. He completed 13 or 21 passes for 218 yards, including a 43-yarder on the second possession. But the Blackhawks fumbled it away on the following play, allowing Mason Harris to recover for the Saints.

Shiloh got a couple of 13-yard scoring runs on its next two possessions, courtesy of Williams and Wisdom, to make it 28-0 with 10:11 left in the first half.

Wisdom needed just one play on each of the following two possessions, hitting a striding Jacob Solomon for a 50-yard scoring strike, then going to Hutchinson one more time for a 35-yard touchdown, to make it 42-0.

Anderson then entered for the Saints and led a three-play drive that ended with a 10-yard run by Cameron Arellano to extend the lead to 49.

Pea Ridge opened the second half with a three-play scoring drive, as Dixon hit Bowen Phillips for 29 yards, then Trevor Blair for a 35-yard touchdown.

With a running clock in the second half, Shiloh milked time with a 12-play drive midway through the fourth quarter that ended with an Anderson 23-yard scamper to paydirt to make it 55-6.

The Blackhawks battled until the end, scoring on the final play of the game.

It was Pea Ridge coach Brey Cook’s debut as a head man. The former team captain of the Arkansas Razorbacks was promoted from offensive line coach in April to replace the departed Jeff Williams, who became the Siloam Springs athletic director.

“That’s a dang good Shiloh team and Jeff Conaway does a great job,” Cook said. “If I was going to put money down, I’d say they are going to win it all again this year.”

Cook, 28, graduated from Springdale Har-Ber in 2011 as the state’s top-rated high school prospect. He played four seasons for Arkansas, serving as a team captain for the Razorbacks in 2014. He then served as a graduate assistant at Arkansas and Memphis before taking over as offensive line coach at Southwest Baptist University in Bolivar, Mo.

He acknowledges that he has a tough task ahead of him, but is ready to meet the challenge and get the Blackhawks back to championship form.

“For us, we cannot make the mistakes that we made tonight, because a team like that is going to capitalize,” he said. “This will be a great opportunity for us to learn on watching the film. We need to see where we made mistakes and fix them. I’ve never backed down from challenges, so for us to line up against Shiloh the first game is perfect. We want to play and compete against the best.”

Cook likened being a head coach to that of playing on the line.

“There’s really a lot of transition and getting guys to believe in one common thing — which I think we have — and it’s about guys committing to get better,” he added. “You’ve got to be able to trust the guy next to you, just like as a head coach, I have to be able to trust my assistants. And I’ve got awesome assistants.

“When I took the job I talked to some of my mentors that have coached me (including Arkansas coach Sam Pittman). They told me just to take it day by day, you’re not going to win them all, but you can learn from your losses.”

Conaway was the first to offer Cook some uplifting words after the game.

“I know he will get this where he wants it, because he is a good coach and a good man, and I respect him very much,” Conaway said. “I know it’s not where he wants it to be yet, but I have a lot of faith that he’ll get it there.”

Conaway knows it is always tough to repeat as state champions, but he feels he has the team to make another run.

“We’re obviously excited about the guys that came back from that state championship team, but anytime you win it you know you’ve got that bullseye on you every week,” he said. “The preparation and getting ready to play this week was huge for us, but our guys handled it really well. They didn’t get too emotional, up or down, and they played very, very steady.”