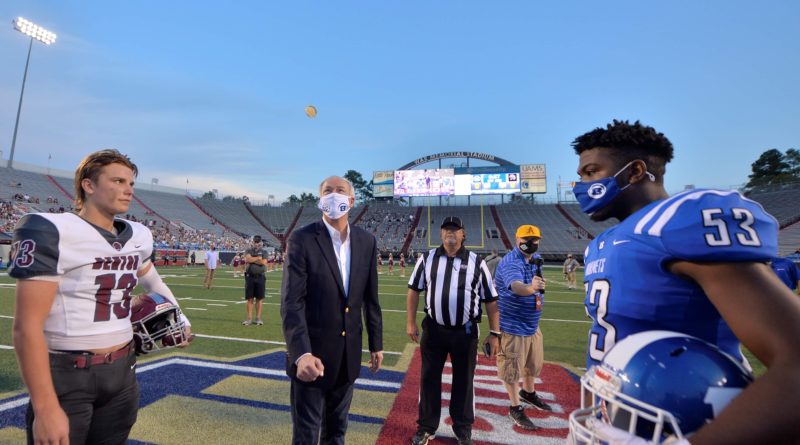 Bryant hasn’t lost to Benton in the Salt Bowl since 2005. The Hornets have won the past seven meetings by a combined 228-97. Each of the past three has been by 14 points or more.

But when the Saline County rivals take to the War Memorial Stadium turf Saturday night, not many of the players who helped rack up 30 consecutive wins and three state championships will be on the field for the Hornets.

“Our fans are going to need a program,” Bryant coach Buck James told me this summer. “We’ve got a lot of guys that will play in this game that were watching from the stands last year.”

Bryant returns five starters on its offense and just two on a defense that was fierce a year ago.

Still, most pundits, including this one, are predicting Bryant to win an unprecedented fourth straight Class 7A state title. Why the confidence? Two reasons. One, coach Buck James. The Pine Bluff native has won at Star City and Camden Fairview and now I’ve seen first-hand how he’s taken a Bryant program to new heights.

Second, the cupboard is stocked with talent all the way down to the grade school programs. Bryant football teams from pee-wee to middle school to junior high aren’t losing much these days. Sophomores have played key roles in all of the championships. Ledbetter was the Hornets’ starting quarterback by the end of his sophomore season. Even the young players in the program are wildly talented, and James and his staff get the most out of them. It’s a safe bet you’ll see a few in starring roles Saturday night.

Another key component to the sustained success is James plays a lot of guys. Many positions cycle in and out, so even though a player might not have started, he did get varsity snaps the year before. There is also the fact that so many of Bryant’s games are lopsided and reserves receive significant action in several games, helping them prepare for the next season.

But going back to the Salt Bowl. This is a different venue to make a varsity debut than most. It is unlike any other game in Arkansas — and maybe anywhere in the United States other than Texas. More than 30,000 fans are expected to file into the venerable Little Rock Stadium.

The pomp and circumstance — and the pressure — is real. We’ve seen several meetings where both team are trying to fight off the jitters to start the game. Bryant has been so dominant in recent memory, though, that it hasn’t really mattered.

That could change this year. Despite its showings against the juggernaut Hornets, Benton more than holds its own with other opponents. In 2019, Benton lost to Bryant 42-14 in the Salt Bowl but defeated 6A power Greenwood to win a conference crown and narrowly missed a state championship, falling 28-27 to Searcy in the title game.

So, the Benton teams under coach Brad Harris aren’t slouches. Harris has an impressive 40-22 record at the school. The problem is that Bryant has more depth, being a bigger school district, and Bryant is playing its best football in the history of the program. It’s tough luck for Harris, who has told me that some of the older Panthers fans would rather beat Bryant than win a state title.

This season, Benton is the more seasoned team. The one main concern for Harris this summer was probably at quarterback, where undersized and inexperienced Jack Woolbright was slated to start. Near the end of July, however, Stran Smith moved in from Monticello.

Smith was a two-year starter for the Billies and although they employed a run-first offense, he managed to pass for more than 1,300 yards in 2020. Harris is confident Smith can make some noise in the Panthers’ high-octane offense that includes wide receivers Cameron Harris and Andre Lane. Running back Casey Johnson is also a threat after rushing for more than 1,000 yards last season.

It will be interesting to see (a), how nervous Smith is playing in front of a monstrous crowd against bigger, faster players, and (b), how a green Bryant defense reacts to a potent offense that could mix it up. How that manifests itself early could be key.

Where Benton has had its problems in the series is with physicality, especially defensively. And it doesn’t get any easier this year, considering the biggest strength the Hornets have is an offensive line that any coach in the country would be jealous of, led by NCAA Division I tackle prospects Will Diggins and Brooks Edmonson. Both of those pillars have started since they were sophomores, and classmate Jason Shifflet is also dominant up front. James said this summer that he could play 14 guys on the line. That is some major depth.

It also affords James the option of playing Diggins on defense, something that could happen in this game and could ground the Panthers’ offense with a line that isn’t extraordinarily large.

The Panthers are scrappy on defense with all-state linebacker Beau Wright and safety Cain Simmons (102 tackles in 2020) leading the charge.

Bryant is predicted to win and rightfully so after dominating the series and being the three-time defending champions. If an inexperienced Hornets team dominates a Benton team that could contend for the Class 6A state championship, that doesn’t bode well for the rest of the teams in Class 7A.