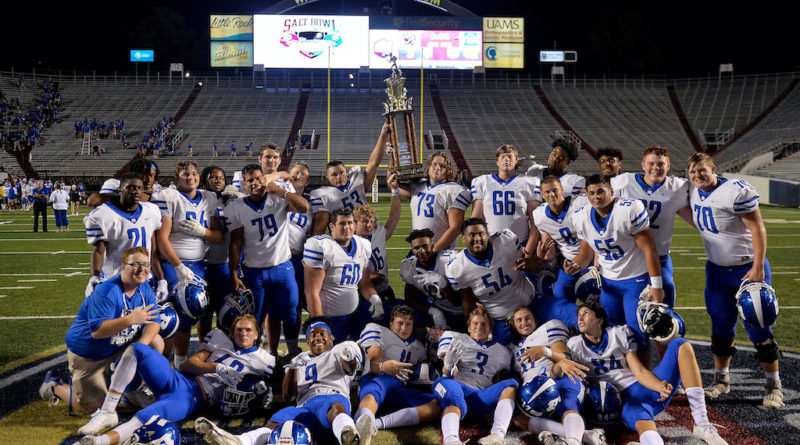 Bryant returned only two starters on defense from last year’s undefeated squad, but you couldn’t tell during the Salt Bowl game against Benton at War Memorial Stadium on Saturday night.

The Hornets stopped Benton on two fourth-and-inches plays in the first half and held Benton scoreless until the fourth quarter in a 42-3 victory.

“I thought defensively we played great,” Bryant coach Buck James said. “They played their starters until the end, and to hold them to three points is awesome. We have 10 new starters on (defense). We just didn’t know what would happen …

“We left a couple of (touchdowns) out there in the first half that we could have scored. I thought our offensive line controlled the ballgame, and our running backs ran well. If we can improve off of this, we will have a chance to have a good team.”

Bryant moves its win streak to 32 games and hasn’t lost to Benton in the annual Saline County rivalry classic since 2005.

This was the most inexperienced Hornets team Benton has faced in some time, but it didn’t surprise Panthers coach Brad Harris to see the Hornets have reloaded as they seek a fourth consecutive Class 7A state title.

“They are very talented,” Harris said. “They are inexperienced like Coach James said, but they are going to be good. They are athletic and rotated seven or eight guys on the defensive line. They keep fresh legs and attack you. They have two linebackers that can run and attack and corners that are rangy. On the offensive line, they are huge up front.”

The Bryant defense held Benton just under 100 total yards in the first half. The two fourth-down plays stole any momentum the Panthers were able to muster as they trailed 21-0 at halftime.

The first stop set up Bryant’s first score. Midway through the first quarter, Casey Johnson was stuffed for a two-yard loss on a fourth-and-1 play on the Benton 42-yard line.

Eight plays later, Hornets junior running back Chris Gannaway danced in from five yards to put Bryant ahead 7-0 with 2:40 to play in the first quarter.

In the second quarter with the Hornets up 14-0, Benton drove into the red zone, but again Bryant held on a fourth-and-1 from the Benton 14 with Johnson being stopped for a loss.

“It was huge,” James said. “We stopped them on fourth-and-inches twice. That’s hard to do with anybody. Those guys stood up and did it, and then we made them punt it on fourth down. It changed the complexion of the game.”

Not to be outdone by the defense, a couple of offensive newcomers broke the game open with big plays.

Sophomore running back Mytorian Singleton hauled in a 63-yard slant for his first varsity touchdown to put the Hornets up two scores in the second quarter. Singleton also rattled off a 33-yard run in the first half and finished with 114 total yards.

Gannaway, who led the Hornets with more than 100 yards rushing, broke off a 58-yard yard run with just over five minutes to go in the first half to extend the lead to 21-0.

Gannaway took a tunnel screen 90 yards for a touchdown in the third quarter to give Bryant a 28-0 lead.

“I just had to come together with my teammates and work with them. When I get the ball, I have to explode and do what I do,” Gannaway said.

Gannaway watched as a sophomore as three Hornets running backs carried the load. He and Singleton made the most of their touches Saturday night.

“Last year, I just had to learn from those guys,” Gannaaway said. “Now, Mytorian and I go at it every day in practice and make each other better.”

Senior Carson Burnett made his first varsity start at quarterback. He completed four consecutive passes for 97 yards in the second half and had close to 200 yards passing for the game. He ran for a five-yard touchdown late in the game, giving Bryant a 42-0 lead.

After the teams played in front of a limited crowd last season because of the COVID-19 pandemic, there were 23,186 fans who turned out Saturday, with the visitor’s side of the stadium covered in blue.

“It was great,” James said. “Everything but the bus ride over when we wore masks was normal and we enjoyed it. The kids need to be doing it. We need to get back to normal.”

Despite the string of defeats in the series, Benton has made some deep runs in Class 6A in recent memory. Harris said his squad will turn the page and seek improvement against Class 7A Little Rock Southwest and Little Rock Catholic to round out the nonconference slate.

“We have been in this situation before,” Harris said. “We have bounced back and have been playing at (War Memorial Stadium) at the end of the year (in the Class 6A state championship game). I like our team. We have a week off, and then we will bounce back.

“It is what it is — it’s Game 1. It’s hyped up as the biggest rivalry in the state and all of that stuff, but it’s just a ballgame.”