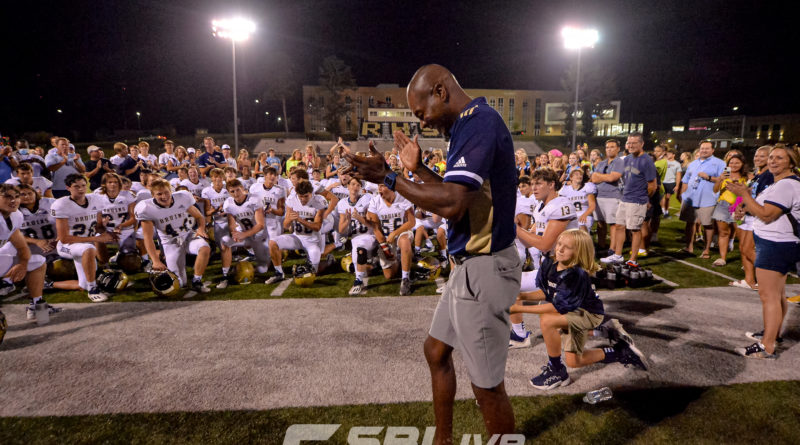 LITTLE ROCK — Pulaski Academy has a new coach in former Arkansas Razorback wide receiver Anthony Lucas, but according to Robinson coach Todd Eskola, the defending Class 5A state champions didn’t look any different in a season-opening 60-27 rout of the Senators at Charlie George Stadium.

“They ran the same stuff and didn’t change anything,” Eskola said following the loss Friday night.

The Bruins scored on seven of their nine first-half possessions. Pulaski Academy was held on downs when Charlie Fiser missed Charlie Barker on fourth-and-seven from the Senators’ 40-yard line on their first possession and ran out the final 1:33 of the second quarter after taking over following a Senators fumble on their 46.

“I feel so much better,” said Lucas, who was hired to replace Kevin Kelley in May after Kelley, who led the Bruins to nine state championships in 18 years, left for Presbyterian College in South Carolina.

“I was so nervous before the game and I didn’t know how we’d respond, but was I proud of the way we responded.”

After the Bruins were held on downs on their first possession, the Senators took a 7-0 lead on a five-play, 60-yard drive that ended with Jack Cleveland scoring from two yards out with 9:26 left in the first quarter. Alex Gabriel added the extra point.

“Our kids were a little nervous because we had to see what they were doing early on, but we calmed down after that first drive,” Lucas said. “We didn’t have a lot of meaningful adversity, but we did play Pulaski Academy Bruins football.”

“Charlie did a great job, but I give a lot of credit to our offensive line because he had a lot of time in the pocket,” Lucas said.

Said Eskola: “We had some blown coverages in the first half and gave them some cheap points. You can’t spot PA anything. They executed and we didn’t.”

After the Senators’ early touchdown, it was all Bruins. Pulaski Academy answered with an eight-play, 61-yard drive, with Fiser throwing a 13-yard touchdown pass to Zack Biagioni and throwing to Hawkins for the two-point conversion to take an 8-7 lead. Robinson’s next drive ended with Cleveland being intercepted by Josh Cady at the Bruins’ 9-yard line at the 3:43 mark. Nine plays later, Fiser threw 25 yards to Jordan for a touchdown and then connected with Jaylin McKinney for the two-point conversion to make it 16-7 with 2:18 left in the first quarter.

After Cleveland was stopped short on fourth-and-two at the Bruins’ 38 with 52 seconds left in the first quarter, Pulaski Academy needed six plays to get in the end zone. Fisher threw eight yards to Barker and added the two-point conversion with a pass to Joe Himon to make it 24-7 at the 11:12 mark of the second quarter.

Following a Robinson punt, the Bruins again needed six plays to reach the end zone, with Fiser and Jordan connecting on a 42-yard pass to give them first-and-goal at the Senators’ 6. Two plays later, Himon took a direct snap and scored to make it 30-7. Fiser threw to Barker for the conversion, and it was 32-7.

The Bruins recovered an onside kick and five plays later, Himon took a direct snap three yards to make it 38-7 at the 6:53 mark. After a Robinson possession lasted four plays with Cleveland getting sacked at his 40-yard line, Fiser found Barker down the middle of the field for a touchdown with 5:15 left in the quarter. Fiser threw to Jordan for the conversion to make it 46-7.

Robinson answered when G’Kyson Wright scored on a 47-yard run on the Senators’ first play of their next possession. Gabriel’s kick made it 46-14.

Charette helped cap the Bruins’ last scoring drive of the half with a 40-yard catch that set up an 18-yard catch from Fiser. Vaughn Seelicke kicked the extra point for the Bruins to make it 53-14.

Noah Freeeman scored on a 28-yard run at the 5:16 mark of the third quarter to finish a 12-play, 80-yard drive for the Senators. Charette caught a 39-yard pass from backup Kiel Busby with 5:34 left in the game. Chase Nichols caught a 27-yard pass from Wright as time expired to close the scoring.