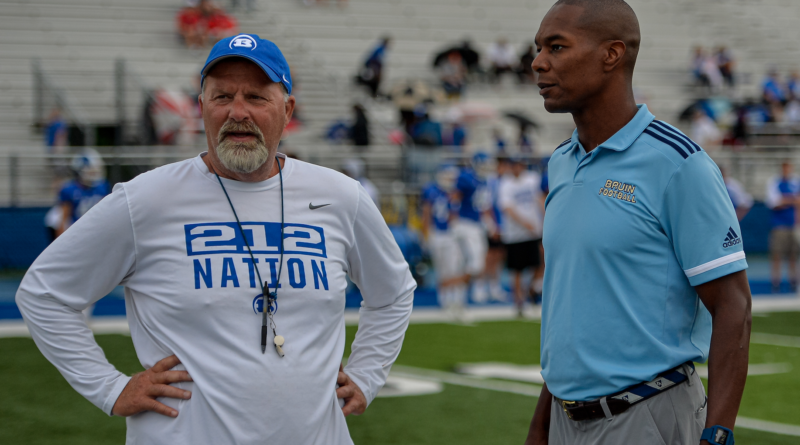 The Arkansas high school football season has arrived! Here are 10 burning questions to be answered over the next four months …

1. Will COVID-19 affect games like it did last year?

No. While the Delta variant is more potent, many programs seem to be following the lead of the likes of Class 2A Fordyce, which made a push on its squad to be vaccinated to ensure it has a chance to win a third consecutive state title. The Arkansas Activities Association declared in the offseason that if a program is unable to field a team, the opponent will be awarded a forfeit win, which is a change from last season, when a team’s COVID-19 outbreak yielded a ‘no contest.’

We will see a few forfeits, but nothing like the crazy schedule changes and cancellations of last season. Let’s hope by the end of the season the surge lessens, and COVID-19 is less of a threat.

No and yes. Bryant is riding a 30-game winning streak which should be safe in nonconference matchups against Benton and Marion. However, the final nonconference game at Longview (Texas) will be tough. Even though the Lobos are also reloading, they will have a shot against the Hornets, who return only five starters.

Bryant will only get better as the season rolls on, though, and even if the Hornets slip up against a 7A-Central foe, they will recover and become the first team from the state’s largest classification to win four consecutive state titles.

3. Will Pulaski Academy dip in the absence of longtime coach Kevin Kelley?

By far, the biggest offseason news was the departure of PA coach Kevin Kelley to Presbyterian College. It was big for two reasons. One, Kelley is finally getting a chance to try out his unconventional philosophies at the next level. The other was how his absence after 18 years would affect the PA program, which won nine state titles and six of the past seven Class 5A crowns under his direction.

I like how PA handled the departure and as Kelley told me this week, “Seventy-five percent of the staff was intact.” It was natural to keep the core staff and reshuffle positions hoping to keep the aggressive philosophy Kelley made famous and the players and parents have adopted. Former Arkansas star receiver and PA receivers coach Anthony Lucas is the calming influence needed at the helm, and with former PA quarterback Adam Thrash calling the plays, the Bruins won’t miss a beat. Expect to see PA back at War Memorial Stadium in December.

Yes. The lone blemish last season was a one-point loss at Sand Springs, Okla. Look for Shiloh to avenge that loss and run past 1-4A Conference opponents and not be tested until MAYBE the Class 4A state playoffs. Class 4A is stacked with great teams, but opponents will most likely have to play the Saints at Champions Stadium, and that is a huge advantage for the Saints in November.

5. Will a 7A-West team advance to the Class 7A state championship game?

No. Bentonville owns that league, but the Tigers won’t be able to overcome the surging 7A-Central. Bryant and North Little Rock have been dominant but now Cabot, which beat Bentonville in the quarterfinals last season, is stronger and Conway is steady as usual. Look for another season of an all 7A-Central affair at War Memorial Stadium.

6. Is a transfer quarterback what Benton needs for a deep playoff run?

Yes. Benton coach Brad Harris experienced a little Christmas in July when Monticello senior transfer Stran Smith (6-3, 190) joined the Panthers’ summer workouts. Smith was set to be a three-year starer for the Billies orchestrating their run-oriented attack. A season ago he passed for more than 1,300 yards and ran for more than 300.

Junior Jack Woolbright, who was slated to be the No. 1 quarterback without any varsity experience, had been dealing with a broken hand and arm issues related to baseball. So, Smith’s arrival was perfect timing. He spent what was left of the summer studying the Panthers’ high-octane attack with quarterbacks coach Justin Ray, a former signal-caller at Benton. Smith, who has been working with a QB coach in California, is attracting interest from college programs. He has plenty of weapons to choose from with classmate running back Casey Johnson and senior receivers Cameron Harris and Andre Lane.

Smith could be the missing piece Benton needed to challenge Greenwood and Lake Hamilton for supremacy in the 6A-West and advance to War Memorial Stadium in December.

7. Which 7A-West transfer will make the biggest splash?

Bentonvlle junior offensive lineman Joey S’ua. The big news in the West this summer, literally, was the revelation that the blue chip offensive line prospect Sua (6-5, 319) had joined the Tigers squad after moving from California when his mother landed a job in logistics at Wal-Mart’s headquarters. Sua, who has offers from Georgia and Michigan State, among others, solidifies a Tigers offensive line group which has only one returning starter. It’s bad news for the rest of the West.

The other newcomer to watch, especially for Razorbacks fans, is new Fayetteville linebacker Mani Powell (6-3, 225). Powell committed to Arkansas over the summer and decided to get a jump on his time at Fayetteville as he and his mother relocated from Canton, Ohio. Powell, who will enroll at UA in January, will make an instant impact at linebacker for the Purple Dogs of Fayetteville, where Indiana commit Kaiden Turner already resides in the middle.

Both programs benefit immensely from the move-ins, but Bentonville, which hangs its hat on offensive line play, now might have what it needs to get to the state championship game.

8. Who will be the surprise team in Arkansas this season?

Hot Springs Lakeside. The Rams have won four of the past seven Class 5A-South Conference championships but have yet to make a deep playoff run under former Nashville High School star and Arkansas quarterback Jared McBride. This could be the year McBride’s squad makes a run at Little Rock in November. The Rams’ offense is explosive with senior twins Chance Cross (running back) and Chase Cross (receiver). Also featured will be super sophomore running back Brayden Russell, who received a scholarship offer from Arkansas this summer. The defense is nasty up front and returns eight starters. With a lot of momentum coming in, this should be one of McBride’s better teams, and a postseason run will turn heads.

9. Can Fordyce pull off a three-peat in Class 2A?

Yes. The Redbugs might not finish undefeated like they did last year, but veteran coach Tim Rodgers does have talent among a roster that features just five returning starters. The key might be how senior Tim Merritt performs under center. The versatile Merritt made big plays for Fordyce last season at wing back, fullback and tight end. The ball will be in his hands even more this season, which is probably right where Rodgers wants it. Fordyce could lose to Junction City in a conference game during the regular season, but Fordyce will be clicking in Novembers and ready for an historic run.

10. Who is the state’s top college prospect?

Joe T. Robinson offensive lineman E’Marion Harris. We’ve been hearing a lot about the 6-foot-3, 340-pound Harris for several years now. The Arkansas commit is the son of former Hogs lineman Elliott Harris. The younger Harris is a three-year starter and looks like he could play Division I football today. He is the No. 1 prospect by a landslide, even though this class includes some great players who already have committed to Division I programs.