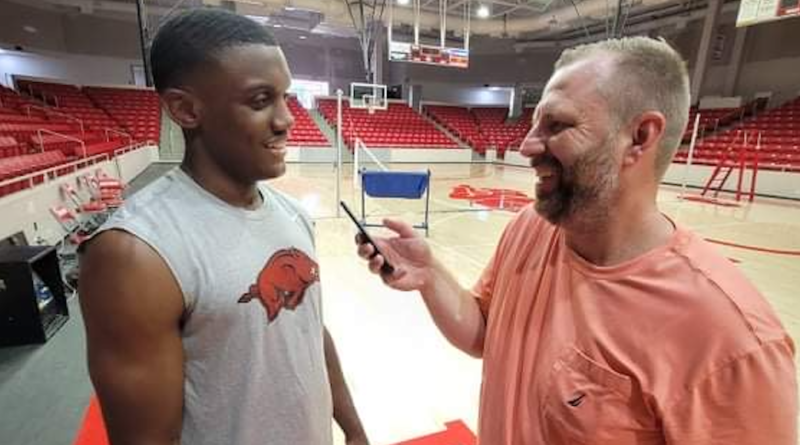 It takes some people their entire lives to decide on a career choice. I knew what I wanted to do in the fifth grade.

I was at a Cub Scout meeting in my small hometown in Iowa, and the general manager of a local television station was the guest speaker. I was enthralled and after the meeting peppered him with questions. Seeing my enthusiasm, he invited me to tour the station.

A few months later, I did, and I read a sports script off the teleprompter like I was the lead sports anchor during the 6 p.m. newscast. I was hooked. I was going to major in communications at Iowa State University and be a member of the sports media. It was written, it was done.

And I did, sort of. I decided to attend Northwest Missouri State University, not far from west central Iowa. The smaller class sizes and chance to dive into the media my first semester were the drawing cards.

The other factor that changed things was my ability to write. About the time I decided on my career choice, a sixth grade teacher named Mrs. Tilton decided I needed to be promoted to the accelerated English class. That was a big status symbol among peers, and her belief in me made me more focused in all of my academic pursuits, and I became a regular on the honor roll after that.

So, as I started college, I did want to be on TV, but I also thought being a sportswriter for a newspaper was a good option. I did both my first semester, and I concluded that my knack for writing and reporting was a bit better than my on-camera ability. I wasn’t going to give that up, though, and continued to host and produce coaches shows and other broadcasting projects. I majored in journalism and minored in broadcasting and made it a goal that if I decided on print journalism, I’d use my broadcasting experience to enhance my career with a talk radio show or TV appearances.

I graduated in three-and-a-half years and was a small-town sports editor in Iowa for two years. Two things drew me to my first position in Arkansas as general assignment sports reporter for the Benton County Daily Record.

One, I wanted to cover college sports, and with that job I’d have regular assignments covering the University of Arkansas. Two, I was covering Rogers High School (the largest high school in the state at the time) and covering the recruiting of a big-time football prospect named Nathan Ball. Also, a blue chip women’s basketball prospect in India Lewis at Siloam Springs.

I was in. I moved to Arkansas in the late summer of 1998 and embarked on a monumental part of my life.

I loved covering the Hogs and prep sports and after a year in the state, I met the love of my life, a sweet Southern blonde named Sheena Dorsey. We were engaged in front of 16,000 fans at an arena football game in North Little Rock and married in March 2001.

During our engagement, I accepted a job at the Northwest Arkansas Times as the backup Hogs men’s basketball beat writer, but a month later I was shipped back to the BCDR to be the sports editor because of the Arkansas Democrat-Gazette merger.

Also, during that time, Sheena’s father was diagnosed with cancer. I decided to leave my job at the BCDR and relocate to central Arkansas. After an exhaustive search, I found a job at the Pine Bluff Commercial covering the University of Arkansas at Pine Bluff and high school sports. Eventually, I became the sports editor.

From 2006 to 2012 I moved into the prep magazine business with the state’s football annual for two years and then as a part of the staff of a national high school magazine called VYPE. We produced monthly high school sports magazines and a football preview. It was my favorite job I’d had.

After a layoff, a return and then becoming co-publisher, I walked away. With two toddlers at home and a wife who owned a law degree and a budding career, I didn’t need to work 14 hours a day on a magazine during a lull in the economy.

So, I took a job in health care marketing with traditional business hours. I did restart my journalism career as the editor of Sync magazine in 2013 and loved it. After two-and-a-half years, however, it was evident that the parent Arkansas Democrat-Gazette wasn’t going to be able to support the lifestyle and entertainment magazine for the long haul, so I left journalism for the public relations field in 2015.

The past six years, I have done content generation for a bank, been a communications consultant and just wrapped up a stint at a state agency working in communications and public outreach. It was a path that needed to be taken, and I enjoyed it much of the time. But I always wrote freelance sports columns and many of you thought I was a full-time sportswriter. I really didn’t want you to think differently.

Last fall, my photography friend, Jimmy Jones, with whom I have worked on many projects in the past 15 years, told me about a new company called Scorebook Live. I had seen it had partnered with the Arkansas Activities Association, but I didn’t know a lot about it. He urged me to visit with the company’s managing editor, a former Oregonian (Portland newspaper) preps editor named JD Humburg. We hit it off immediately, and as the calendar turned, he mentioned the possibility of a full-time job.

I wasn’t really looking for that, but the thought of it intrigued me. On one of my freelance column assignments, I wrote from the Reynolds Razorback Stadium press box on the San Jose State football game in 2019. I don’t have to tell you how eventful that one was as it signaled the beginning of the end of the Chad Morris Era. As I wrapped up my column and looked around the press box, I thought, ‘Dang, I wonder if these people know how lucky they are. No cubicles, paperwork or stuffy meetings or dress slacks. Just covering sports free and easy!’

Well, I know it’s not free and easy, and many times it doesn’t pay a lot, but the point is when you love your job and are passionate about it, you don’t really work. It isn’t a job; it’s your hobby and your interest. For a brief instant, I wanted that feeling back.

Two years later, I’ve traded in pants for gym shorts and a cubicle for a press box once again. My colleagues weren’t surprised. After all, after seeing my cubicle littered with 1990s major league baseball pictures and Chicago Cubs memorabilia, they knew where my passion lies — sports, and of course my family, including my boys J.D. (12) and Luke (10). Sports and my kids are really all I want to talk about. When I broke the news to my work friends, they smiled and nodded. They knew. Not one asked why I would make such a move.

“Sports is your calling,” my younger brother Andy told me on the phone the other day. “It’s what you love.”

So here I am, rewinding the tape to 2012, covering high school sports for another quality company. I’m absolutely ecstatIc.

What does that mean for you, the high school sports fan? Simple: wall-to-wall coverage of Arkansas prep sports from preseason practice until the state championships.

Game previews, game stories, feature stories, rankings, columns, players of the week, recruiting, breaking news and more. Plus, you’ll hear me on some of your favorite sports talk radio stations with analysis and see me on television previewing big games of the week.

My boys started school Monday. The excitement was in the air at the breakfast table. I felt the same way as I started my new job and restarted the career I envisioned when I was their age.

I look forward to seeing you at stadiums and arenas statewide. If you have a story idea or feedback, contact me at nate@scorebooklive.com.