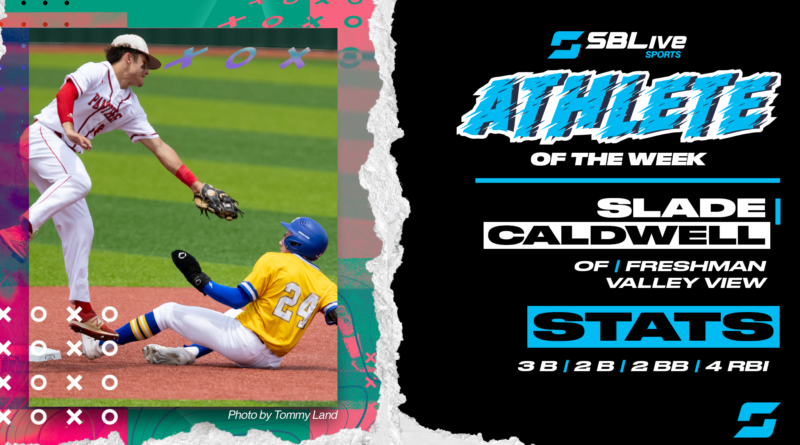 Congratulations to Valley View freshman Slade Caldwell for being voted SBLive’s Arkansas High School Athlete of the Week for May 10-16!

The freshman tripled, doubled, walked twice and drove in four as Valley View beat Shiloh Christian 11-4 in a 4A semifinal.

Caldwell ran away with this week’s honor, receiving 71.85% of the total vote.

Chris Anderson, Harding Academy baseball: In a 6-5 win over Ashdown in a 3A semifinal, Anderson homered, walked, scored two runs and drove in three.

Macey Cutsinger, Greenwood softball: Cutsinger had three hits and three RBIs in an 11-5 second-round win over Marion in the 5A playoffs and two more RBIs in a 7-5 semifinal victory against Mountain Home. In a 3-0 first-round win over Lake Hamilton, she tripled, singled and drove in a run.

Cooper Dossett, Har-Ber baseball: Dossett fired six no-hit innings and struck out 10 to lead Har-Ber to a 3-0 win over Bryant in a 6A semifinal.

Katlyn Erickson, Conway softball: Erickson pitched a two-hitter with 11 strikeouts as Conway defeated Cabot 9-1 in a 6A semifinal. She also hit a double.

Rhett Hosman, Jonesboro baseball: In a 13-3 rout of Greene County Tech in a 5A semifinal, Hosman led the offense with two hits and three RBIs. He drove in two runs in a 13-2 second-round win over Texarkana.

Connor Johnson, Van Buren baseball: Johnson pitched his team to a 6-2 win over Greenwood in a 5A semifinal by striking out 13 batters and allowing just four hits in seven innings. He also had a hit and an RBI.

Makenna Keeton, Morrilton softball: Keeton pitched a five-hit shutout in a 4-0 win over Nashville in a 4A semifinal. The previous round, she struck out 15 as part of a four-hitter in an 8-0 win over Star City.

Allie McMillen, Conway softball: McMillen homered, doubled and drove in six to lead Conway to a 9-1 victory over Cabot in a 6A semifinal. She also homered in a 4-3 second-round win over Rogers.

Tuesday Melton, Benton softball: Melton homered and earned the win with three shutout innings, leading Benton to a 4-0 win over Greene County Tech in a 5A semifinal.

Emily Perry, Bentonville softball: Perry homered in a 7-1 second-round win over Northside and again in a 13-3 semifinal victory against Bryant in the 6A playoffs