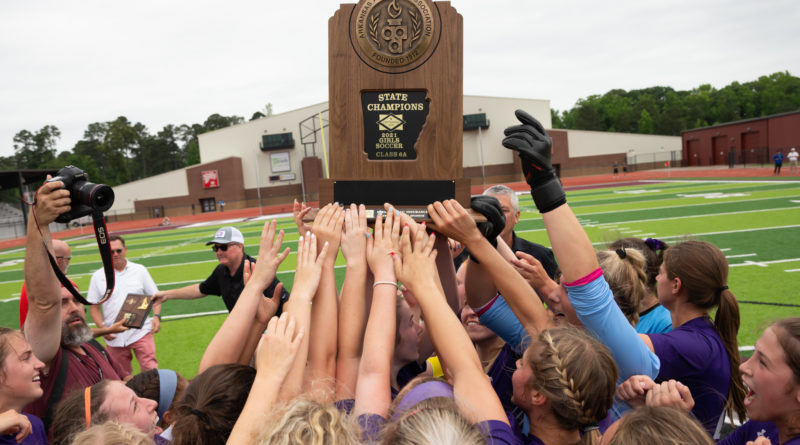 History was made and stars shined as eight girls soccer teams fought for class supremacy at the Benton Athletic Complex on Friday and Saturday.

Fayetteville clinched the sixth state title in program history with a 3-0 win against Bentonville West on Friday. The Bulldogs finished the season undefeated with a 17-0-3 record.

Madi Wilburn earned MVP honors with an assist and a nifty goal from the left edge of the box on a throw-in during the second half. Lauren Magre scored the other two goals.

The state championship is the first for Fayetteville since 2010 and the second for coach Joe Thoma at the school.

Sophomore Gabie Eddins, the game’s MVP, assisted on the first goal and on another in the second half. Juniors Mary Daniel and Hagan Bryant each scored twice. Senior Aubrey Arnold and Chandler Meadows added a goal apiece.

The championship is the Lions’ fifth in program history and the first since 2013.

Class 4A: Hot second half pushes Pulaski Academy past Harrison

It took Pulaski Academy freshman Maria Sanhudo a while to heat up Friday, but eventually she and the Bruins (19-0-3) took control of Harrison (18-3-0) and cruised to a 4-0 victory.

Sanhudo took four of PA’s seven shots in the first half but couldn’t convert as the teams were scoreless at the break.

Seven minutes into the second half, Sanhudo, the game’s MVP, got another chance to score and this time she converted on a header off a pass from Savannnah Goodwin, who won a state championship with the football team in 2019.

The win avenges a 2019 title game loss to Harrison and is coach Chris Owen’s first championship at Pulaski Academy.

It took Harding Academy only three years to win its first girls soccer title. The Wildcats ran past Green Forest for a 6-2 win Friday.

Angie Harlow started the program in 2019 and coached only a few games last year before the pandemic halted the season. She guided Harding Academy to an 11-3 mark in 2021.