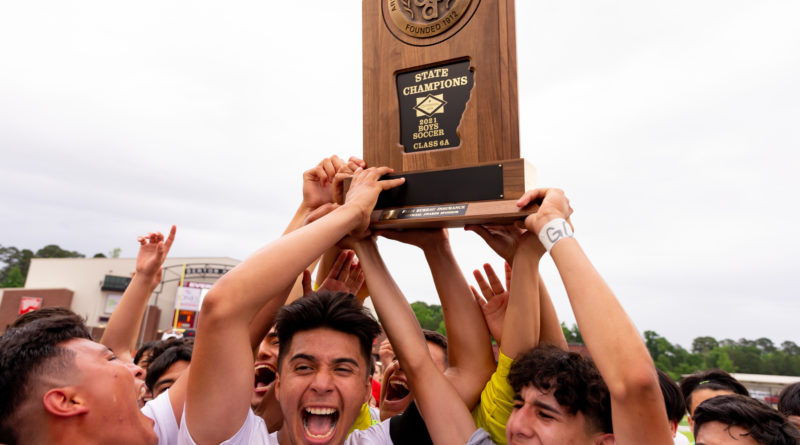 Class 6A: Springdale goes back-to-back with dominant win against Conway

Springdale made history Friday, winning its second consecutive state championship with a 4-1 win over Conway.

The Bulldogs, who have three titles in school history, join Pulaski Academy (2000-01), Springdale (2009-11) and Bentonville (2014-16) as the only teams to win consecutive state championships in the state’s largest classification.

Springdale led 2-0 at halftime and never looked back.

Senior Erick Guerrero, the game’s MVP, scored twice and picked up an assist. He scored the game’s final goal with 55 seconds to play. Classmates Rene Recinos and Diego Flores added the Bulldogs’ other goals.

Van Buren (16-6-2) lost its previous two meetings with 5A-West Conference foe Russellville but avenged those losses Saturday afternoon with a late goal to take a 2-1 win.

Pedro Rodriguez, the game’s MVP, scored the first goal and fed Kylan Almond to set up the winning goal in the 63rd minute.

Class 4A: Valley View clamps down on De Queen

Valley View withstood a barrage of De Queen shots but didn’t give up a goal until the 78th minute in a 3-1 win.

The Blazers (20-4-1) got goals from Haseeb Ahmand, Josh Nwokeji and Hayes Webb.

The title is the third since 2013 for Valley View.

Green Forest finished the season with a 22-0-1 record, knocking off Harding Academy 2-0 on Saturday afternoon.

Allan DeLeon was the game’s MVP. Blut Htoo gave the Tigers a 1-0 lead in the first half. Bluh Doh Soh added a goal in the second half.

Harding Academy finished its third season of soccer with a 12-3-1 record.