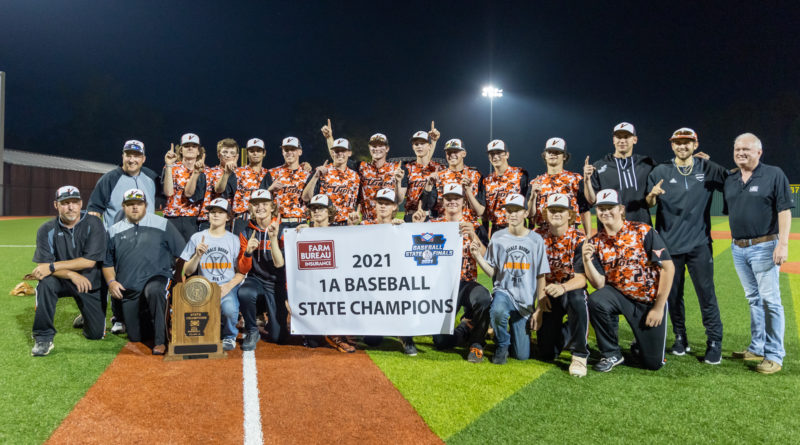 BENTON — The bottom of the first inning told the story of Viola’s 11-4 victory over Izard County in the Arkansas Class 1A baseball state championship game Saturday night at Everett Field.

“It didn’t start out too well for us,” Izard County coach Billy McBride said. “If we limited (it) to one run, we might have had a chance. We had to tell them that it is a long game and there are going to be a lot of ups and downs.”

Izard County took a 2-0 lead in the top of the first when Noah Everett doubled to right to score Chase Orf, who led off the game with a walk. Everett scored on a passed ball to make it 2-0.

Things changed in the bottom half of the inning.

Viola’s Gage Harris led off with a single to left. The next batter, state tournament most valuable player Mason Luna, reached on a fielding error by Izard County shortstop Everett, who then threw the ball away, allowing the runners to get to second and third.

After his brother, Bryson Luna, popped to second, Auston Luna grounded to short to score Harris to make it 2-1.

Carter Graves walked, and Andrew Cantway reached on a throwing error by third baseman Zach Simmons which allowed Harris to score to make it 2-2.

With Landon Luna batting, Izard County pitcher Landon McBride tried to pick off Cantway at first base. With Cantway in a rundown between first and second, Graves, who was on third, stole home to make it 3-2.

After Landon Luna and Luke Worsham walked, Gavin Blevins singled in Cantway and Landon Luna to make it 5-2, and Billy McBride replaced Landon McBride with Orf on the mound.

After a walk to Harris, Mason Luna grounded into a fielder’s choice to end the inning.

“The thing tonight is we were going to play the same way if we were up 10 runs or down 10 runs,” Viola coach Clayton Gardner said. “We were kind of late starters, but we managed to turn things on.”

Viola added one in the second on an RBI double by Graves which scored Auston Luna to make it 6-2.

In the third inning, a bases-loaded walk to Auston Luna scored Harris, a sacrifice fly by Graves scored Mason Luna, and an RBI single by Cantway scored Bryson Luna to make it 9-2.

Izard County got two in the fourth when Caleb Faulkner doubled to score Coby Everett and Simmons singled in Faulkner to make it 9-4.

Viola got its final two runs in the fourth when Mason Luna reached on a fielder’s choice on which Orf committed a fielding and throwing error at second base, allowing Worsham and Blevins to score to make it 11-4.

“This meant everything,” said Mason Luna, who transferred with his triplet brothers, Bryson and Auston, from Dora, Mo., after his father, Rick, got the boys basketball coaching position. “The first inning was not my best, but when I found the zone after that, I started to feel fine.”

Harris led Viola by going 2 for 2 with two runs. Blevins was 2 for 4 with two RBIs and scored one run.

Noah Everett led Izard County by going 2 for 3 with a run.

“We wanted to do something special this year,” said Gardner, whose team also won the state championship in 2019. “Both championships are different, and this year, we brought in the three players and they blended in and helped create great chemistry.

“This means a lot to everyone, but especially to the seniors.”

On the other side, Coach McBride had nothing but praise for Viola.