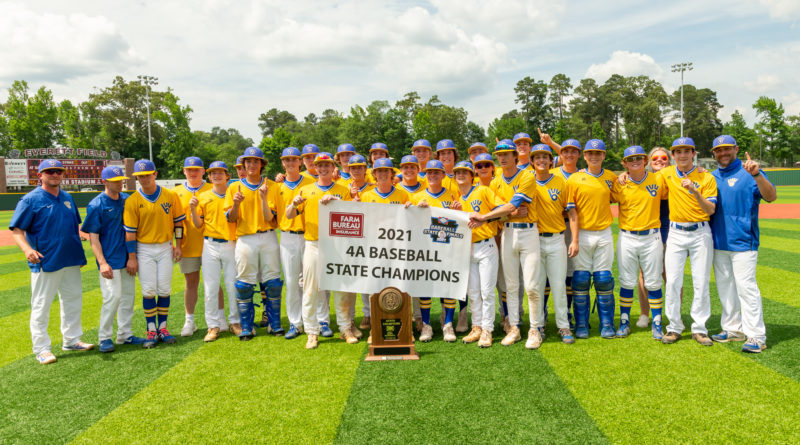 BENTON — Having not won a state title since 2009, Valley View entered Saturday’s matchup with Magnolia with something to prove.

Engaged early in a pitchers duel, the Blazers made the most of the late innings as they raced past the Panthers for an 8-1 victory and the Class 4A baseball state championship.

“We are extremely excited. Going on this run this year, after everything, is really unbelievable.”

There were a couple of early walks, but the first hit did not grace the scoreboard until the bottom of the third inning, when Jayson Thomas singled to lead off the frame for the Panthers.

He would be stranded, however, and it remained scoreless through three.

Valley View took the lead in the fourth on Tyler Hoskins’ sacrifice fly to left that brought home Slade Caldwell.

Caldwell did the grunt work ahead of the fly ball, stealing second and third to set his team up for the score.

With both starters still going head-to-head in the fifth, Magnolia finally broke through with a tying double to left by Tanner Edwards that brought home Thomas.

The even score would be short-lived as Valley View began to come alive at the plate.

Hitless entering the sixth, Valley View took advantage of a one-out triple by Wil French. Grayson Becker followed by getting hit with a pitch, setting up Caldwell for an RBI single and a 2-1 lead.

Hoskins’ sacrifice fly moments later scored Becker and made it 3-1. Caldwell scored on an error, and Valley View had a 4-1 lead.

“We never die and never panic,” Allison said. “Those guys just kept believing and we kept the pressure on (Magnolia) the entire game. Eventually, it turned around into our favor.”

Magnolia went scoreless in the bottom of the sixth, setting up Valley View for more fireworks in the final inning.

After a leadoff strikeout, the Blazers had six consecutive batters reach base as they tacked on four more runs to make it 8-1. Ryan Collins, Jackson Stotts, French and Brayden Anderson scored in the inning.

“They hung around and hung around and before you know it, they busted it out on us in the sixth,” Magnolia coach Bobby Beeson said. “We still had our chances; we just could not take advantage. Then they come back in the seventh and our pitcher was tired. But I was going to ride him because he had been our workhorse all year.”

“I tip my hat to Edwards, because he battled and battled without his best stuff today,” Beeson said. “That team over there (Valley View) is a great-coached team. Sometimes you win and sometimes you lose. We didn’t play a bad game — they just beat us.”

Earning the game’s most valuable player honor was Anderson, who tossed a three-hitter with three strikeouts and a walk.

“I expected him to be in the zone with his three pitches,” Allison said. “He has ice water in his veins. He doesn’t throw 90s; he throws 80s. He plays his tail off and I couldn’t be more proud of him.”

At the plate, Anderson finished 1 for 3 with a run.

Thomas led Magnolia with two hits and a run.