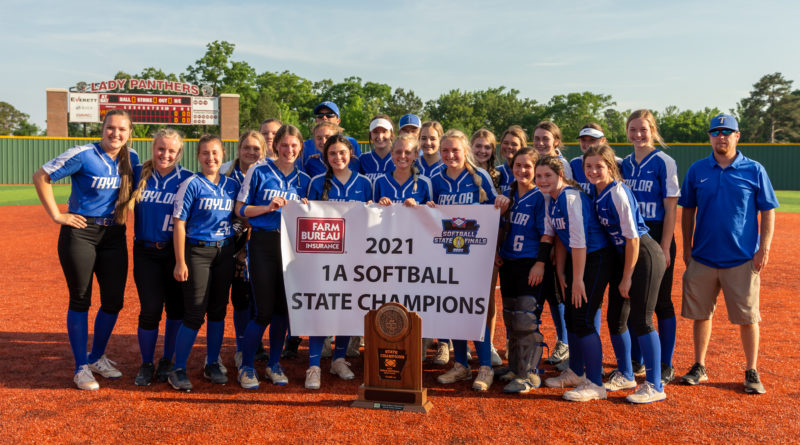 BENTON — Championship Saturday was capped with a Class 1A matchup of new faces and a familiar dynasty.

Taking the field for the last Arkansas softball final were the Taylor Tigers and Sacred Heart Rebels.

Having won the previous three state titles, Taylor was in full championship form again in 2021, roaring past the Rebels easily for a 15-5 victory.

“Eighteen hits in a championship game? That is unheard of,” Tigers coach Adam Camp said. “It has been raining all week in South Arkansas, so all we have been able to do is hit. We have been inside and hitting, hitting, hitting every day. But Sacred Heart played a great game.”

Taylor jumped in front right away, scoring three runs in the top of the first inning on a sacrifice fly by Heidi May, Madison Lindsey’s RBI double and a single from Maggie McHenry.

The Rebels answered with a run in the bottom half of the inning on an RBI groundout by Elizabeth Aquilar.

But Taylor continued its barrage of runs, adding four more in the second.

The first five batters of the inning reached, including three via extra-base hits. A double from Madison Morton plated two before a triple by Lindsey added another. Lauran Leonard tacked on the final run of the inning with an RBI groundout to make it 7-1.

The Rebels swapped pitchers in the third, sending Baylee Sparks to the circle — a much slower pitcher than starter McKenzie Greeson.

Sparks held Taylor scoreless in the third before the Tigers figured things out and tagged her for four runs (one unearned).

Sparks finished with an inning of work, giving up two hits and four walks.

Carly Downs and Morton led the Tigers with four hits each. They combined for six runs and two RBIs.

“Their first five hitters can really play,” Camp said. “But we knew our one through nine could manufacture runs — we just had to be patient.”

“All we asked of Madison was to throw strikes and let her defense do the work,” Camp said. “I knew they would hit, but I knew we could hit with them.”

Taylor finished its fourth straight title season with a 24-4 record.

“It is very special to get here for the first time in school history, and we were very excited about playing,” Rebels coach Kyle Duvall said. “We had momentum coming into the game; we just didn’t play the way we would have liked.

“I am just proud of our girls. We had an unbelievable season. We send out nine seniors and we are going to miss that group and everything they have done for our team and our program.”