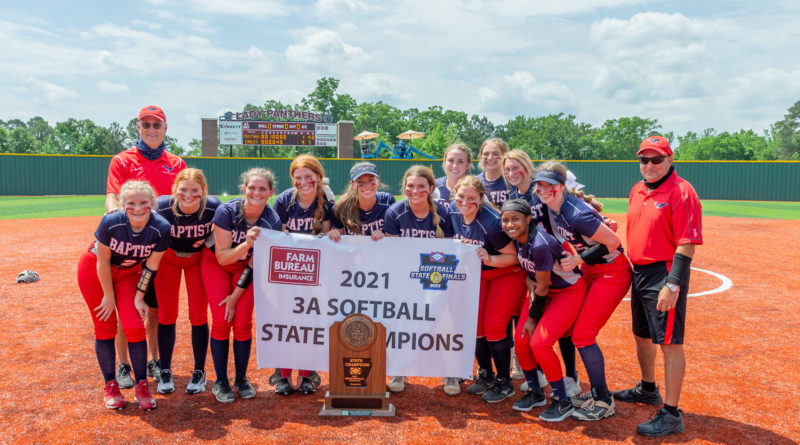 Despite the final score, the game was not always in Baptist’s favor.

After playing to a 0-0 score in the first two innings, Hoxie drew first blood, scoring on a sister-sister connection when Jaecie Brown doubled home Jaedyn Brown from second.

The run would be the first and last for Hoxie as Baptist began to take control.

“That’s how (we) have played all year,” Yelvington said. “You can get them down, but they adjusted and knew they were going to start hitting that girl if they didn’t switch pitchers.

“The last three games it has been just enough — today, we did everything.”

Baptist continued to go scoreless the next two innings, despite loading the bases in the fourth before Hoxie ace Ashten Wallace ended the threat.

The fifth frame, however, was all Eagles as they brought across four runs.

With a runner on and two outs in the inning, Baptist tied it on Wallace’s wild pitch that allowed Karis Turner to score.

Baptist starting pitcher and game most valuable player Macie Welch followed with a walk before Mackenzie Childers doubled to put two on with two outs.

A walk to Liv Slayton, followed by a two-run single by Katie Midkiff, made it 3-1. Baptist made it 4-1 a hitter later when Maci Henderson singled home Slayton.

With the lead, Yelvington decided to change pitchers, bringing in Childers for the remainder of the game.

Childers shined in the sixth, throwing nine pitches while striking out the side and bringing the Baptist bats back to the plate.

After taking the lead in the fifth, Baptist added some insurance in the sixth with five more runs.

Taylor Bornds delivered the fireworks in the inning, launching an opposite-field home run to right for a two-run bomb, making it 6-1.

An error in center added two more Eagles runs for the 9-1 lead.

Needing only three outs for the crown, Childers continued her domination in the seventh, striking out the side once again, sending the Eagles home with the 3A title.

“They know that once I make that switch, it’s probably going to get shut down,” Yelvington said of bringing in Childers. “Sometimes I pitch Childers first and bring in Welch or the other way around and it’s the same outcome every single time. That’s the difference in our team and somebody else’s.”

Childers struck out all six batters she faced in her two innings while throwing 20 pitches.

Welch worked five innings, allowing four hits and one run while walking none and striking out six on 67 pitches.

At the dish, Midkiff led the Eagles with a 2-for-3 day, driving home three and scoring one. She also walked.

Childers had two hits, adding a walk and two runs.

A dozen Mustangs struck out in the game.

Baptist loses only two senior starters this season, including Welch, who is committed to play at Memphis, and left fielder Kailee Massey.

“Macie Welch, you can’t say enough,” Yelvington said. “She wanted this bad and she didn’t let things get to her. Her leg was bothering her a bit on the push-off, but she gutted it out. I am proud of her and this whole team.”