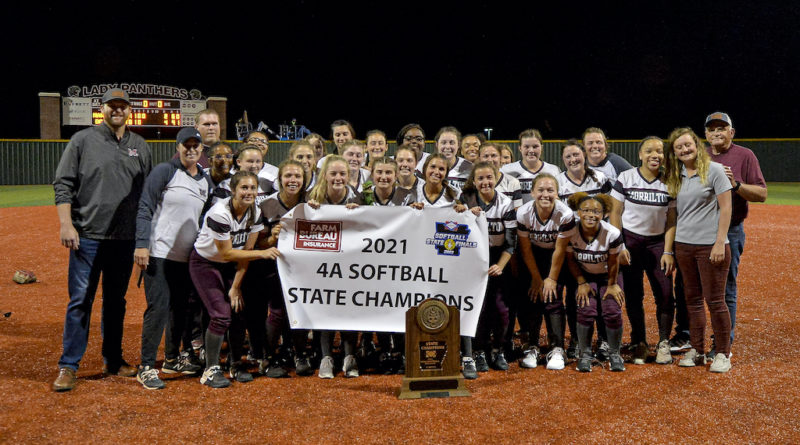 BENTON — Earlier this month, Morrilton beat Pea Ridge 8-2 in the regional tournament. Friday night, the Devil Dogs led the rematch in the Class 4A softball state championship game at Lady Panthers Field from beginning to end, but it was a bit tougher this time around.

After jumping out to a two-run lead in the first inning, Morrilton held on to win 4-2 and secure the program’s first state title.

“We knew Pea Ridge was going to make adjustments,” Morrilton coach Jennifer Binnie-Poteete said. “We already played them this season and our pitcher struck out 12 of their batters, and we knew they were too good and coached too well to not come today and have some adjustments.

“We knew they were going to have a plan and were going to attack. We knew we had to play incredible defense, and we did just that.”

Devil Dogs senior pitcher Makenna Keeton didn’t dominate the Blackhawks like she did in the previous meeting. The Delta State University signee scattered six hits while walking one and striking out three.

“I’ve had better outings, but I didn’t feel like today was bad,” said Keaton, who earned MVP honors. “I felt like I did my part. My team really had my back today. I’m usually more of a strikeout pitcher. (Pea Ridge) did a good job of hitting tonight and my team just had my back.”

Binnie-Poteete, who played at Arkansas Tech University and was a longtime assistant coach at the University of Central Arkansas, had tears in her eyes after a joyous celebration which included a pile-up.

“I don’t even have words for this — it is absolutely incredible,” she said. “These girls have worked so hard since June 1 when the (Arkansas Activities Association) said we could practice. These girls have given their all and wanted it. They knew not to take anything for granted. Every day we had to beg them to go home. There is no other team that deserves this more than Morrilton softball right now.”

The Devil Dogs took the lead in the first inning when sophomore phenom Cheyanne Kemp, one of the top basketball prospects in the state and a standout track sprinter, slammed a solo home run to the deepest part of the park in straightaway center field. Keeton added an RBI single to push the lead to 2-0.

Keeton cruised until the fourth inning, when Pea Ridge got on the board when Dalice White smacked an RBI single. Keeton mitigated the damage by striking out Nalea Holliday to strand two runners.

Pea Ridge was knocking on the door again in the fifth inning. Blakelee Winn doubled to score Ashley Earley, who singled. Again, Keeton escaped without much damage and wiggled out of the inning with a runner left on base when Alevia Reyna popped out in foul ground to end the inning.

Morrilton’s Loren Reynolds had the best night at the plate, going 2 for 2 and delivering the Devil Dogs’ biggest hit in the bottom of the fifth when she hammered a solo home run to center field to give Morrilton a 4-2 lead.

“I told the girls, there is no better time to score than right now — we need a run,” Binnie-Poteete said. “We knew we needed to put some runs on the board to protect our pitcher.”

Pea Ridge threatened again in the sixth inning when Callie Cooper singled with one out. Holliday recorded a two-out single, but Keeton got out of the jam by getting Emily Beck to ground out.

The Blackhawks went down in order in the seventh with a ground out, a pop out and a deep fly out.

“(Keeton) struggled a little bit today because her hands were real sweaty from the humidity out here, but she had that rosin bag, and it helped a little bit,” Binnie-Poteete said. “She did struggle, and it wasn’t her best game, but she battled through it.”

“All we ask of our kids is that they be themselves, and that is what they did tonight,” Reynolds said. “They show up, they fight hard, and they play hard.”

Pea Ridge (21-8) made its first state title game appearance. Reynolds hopes this season is a building block for future success.

“I told the kids, don’t let tonight overshadow what they’ve accomplished,” Reynolds said. “They’ve had a heck of a run and season. Hopefully, this isn’t the first time in a long time, and we will be back.”