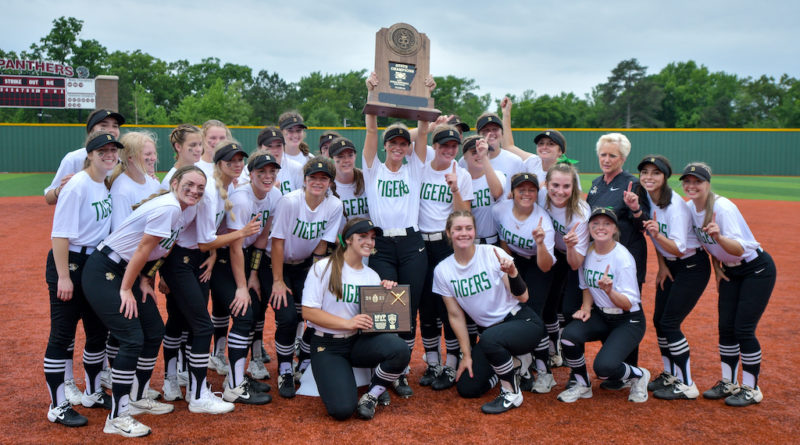 BENTON — For the fifth time this season, Bentonville senior second baseman Emily Perry led off a game with a home run.

As it turns out, that’s all Bentonville needed Friday as the Tigers held off Conway 3-0 in the Class 6A softball state championship game at Lady Panthers Field.

“I didn’t think it was going out at all,” Perry said. “It went over (the right fielder’s) head, so I knew I at least had a double out of it.

“It felt so surreal. I was on top of the world.”

Perry’s average build doesn’t give the hint of the power she’s displayed this season. She says the secret to hitting her team-leading 10 homers is her legs.

The long ball Friday made it three consecutive playoff games with a home run for Perry.

“She is our leading RBI girl, and that is what we want at the top of the lineup,” Tigers coach Kent Early said. “She was unbelievable.”

Perry, the game’s MVP, just missed another home run later in the game that bounced off the wall as she cruised into second with a double.

The win gives the Tigers four state titles in the past five years in the state’s largest classification. Bentonville (27-3) lost in the championship game to Cabot in 2019 and also was runner-up in 2010, 2012 and 2014.

“Thank goodness it’s over,” Early said. “It has been a long time with COVID and having to battle though that — every team had to. I am just so happy for this team. The seniors took over. We are a player-led team. Those guys just balled out. I am extremely, extremely happy for them. I can’t hardly express it. I am just so proud.”

The win was extra emotional for Early as his team wore special jerseys honoring Early’s late father, Alvy Early, a legendary softball coach and athletic director at the University of Arkansas at Monticello.

The jerseys with green ‘Tigers’ printed on the front, in honor of UAM’s school colors, and with ‘A. Early’ on the back, debuted in a quarterfinal win against Fort Smith Northside. After wearing the regular uniform tops in a semifinal win against Bryant, the Tigers surprised their coach by honoring his dad again for the title game.

“Coach Early is literally the best coach anybody could have,” Perry said. “I think so much of him. We just wanted to do something special for him and his dad. He and his dad were very close. Me and my dad have a close bond, so I know it would be so hard to lose a dad. We wanted to do something to remember his dad and something he’d have as a memento of us. It’s not just about the game of softball.

“That got me,” he acknowledged as he choked back tears.

Bentonville clung to the one-run lead until the fourth inning when first baseman Trista Peterson hit a two-run homer, driving in Sydney Rhuda, who was courtesy running for pitcher McKenzie Vaughan. Vaughan led off the inning with a single.

Peterson hammered the ball, but the homer didn’t come without controversy as it sailed high above the left-field foul pole. The umpires ruled the ball went out of the park and then curled foul.

“It was gone,” Early said. “I was hugging the line. It curled beyond (the foul pole). We have had so many close calls. I just wish they had a bigger foul pole. That was a good shot.”

“I really thought it was foul,” she said. “I am not on the line, so it isn’t my call, but it sure looked like it had hooked foul.”

The three runs were more than enough for Vaughan, who pitched a complete game, giving up three hits and striking out five with no walks.

Even with Vaughan dealing, Hickey thought her team would find a spark.

“We just needed to get something going. We had pretty good at-bats. We hit it hard; it just didn’t go our way.”

Despite the loss, Hickey was pleased with her team, which finished 23-8 on the season.

“We got to where we were playing well at the right time,” she said. “That’s really good. You try to instill confidence in these kids. You have to get to the point to where they believe in themselves. We worked our plan the best we could.

“Yeah, I am disappointed, but I am never disappointed in those kids. They have played well all year.”