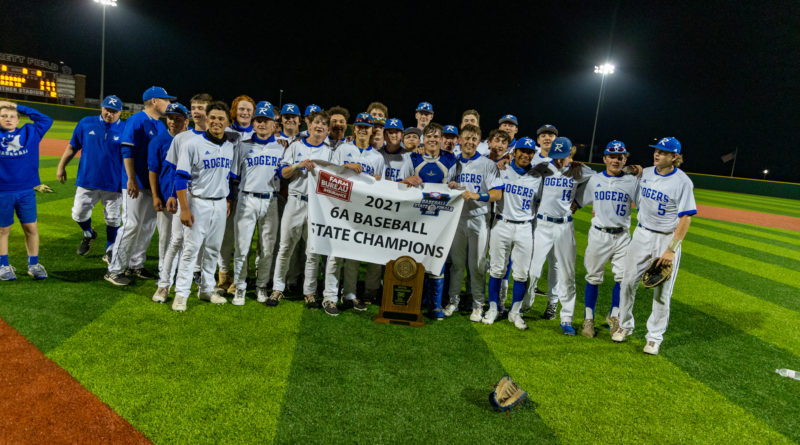 BENTON — J.T. Melson of Rogers showed why he was named Most Valuable Player of the Class 6A baseball state tournament in the Mounties’ 3-2 victory over Springdale Har-Ber in the championship game Thursday night at Everett Field.

With the Mounties holding a 3-2 lead with the bases loaded, the left fielder caught a line drive by Har-Ber’s Drue McClendon and fired a throw to catcher Eli Marcotte, who came up the line to tag out Clark Jenkins and give Rogers (25-7) its first state title.

“I wasn’t thinking about that before,” Melson said. “But once the ball was in the air, I knew I needed to make the catch and make a good throw.

“Eli is awesome. That is a play we work on every day and it pays off.”

Rogers coach Matt Melson, J.T.’s father, said, “That was a super athletic play by Eli. The tag was just as awesome as the throw.”

Said Har-Ber coach Dustin Helmkamp: “Their left fielder made a great play. That’s all you can say about it.”

Har-Ber trailed 3-0 entering the seventh inning. The Wildcats left the bases loaded in the fifth and had two men on in the second and third innings.

With Rogers pitcher Jackson Wells having thrown 102 pitches through six innings, Har-Ber (25-9) put together its best rally. Caden Ross led off the inning with a walk, Walker Immel followed with an infield single to shortstop Noah Goodshield, and Jenkins walked, loading the bases and ending Wells’ night at 113 pitches.

(National high school rules limit pitchers to 110 pitches, unless they are in the middle of an at bat.)

Madden Dillard came in to face Ethan Fender, who singled to score Ross and make it 3-1.

Brock Kimbel popped to first baseman Ty Frakes for the first out of the inning.

Cooper Dossett hit a ground ball to third, which Wells occupied after leaving the mound. Wells was beaten to the bag by Jenkins, and Immel scored to make it 3-2.

“I thought I was in there,” Wells said of the play at third base. “Luckily, the guys picked me up like they did when I walked the bases loaded earlier.”

“Jackson has been our workhorse all year,” Matt Melson said. “He’s our senior and we were going to sink or swim with him tonight.”

Before the seventh, Wells had three innings in which he worked around multiple baserunners.

The first was the second inning, when Dossett singled and Ross Felder walked after McClendon flied out. Kade Ratcliff grounded into a fielder’s choice to end the inning.

In the third inning, Ross and Immel led off with walks, but Ross was picked off second base. Jenkins walked, but Fender flied to center and Kimbel struck out looking to end the inning.

Rogers took a 2-0 lead in the third. Melson led off with a single and was moved to second on Marcotte’s sacrifice bunt. Wells walked and was replaced by Chris Francisco as a courtesy runner. Francisco and Melson moved up on a wild pitch. After Kade Seldomridge struck out, Melson scored on a wild pitch with Frakes batting to put the Mounties up 1-0. Dossett’s wild pitch on ball four to Frakes allowed Francisco to score to make it 2-0.

Dossett walked Karsen Uecker and was replaced by Tyler Ridley, who finished the game.

In the fifth inning, Ratcliff was hit by a pitch and Ross walked. Both runners advanced on a passed ball by Marcotte. After Immel and Jenkins struck out, Fender walked, but Kimbel struck out to end the inning.

Rogers took a 3-0 lead in the fifth on a home run by Seldomridge.

“Our kids have been resilient all year and I never doubted we could come back,” Helmkamp said.

“Obviously, it was frustrating to have chances and not take advantage. A lot of that goes to their pitcher, but our guys kept battling.”

Matt Melson said, “We’ve been waiting a long time for this to happen and knocking on the door for a while. This is huge for us and it was great to see the community support here tonight and I’m glad we could give it to them.”