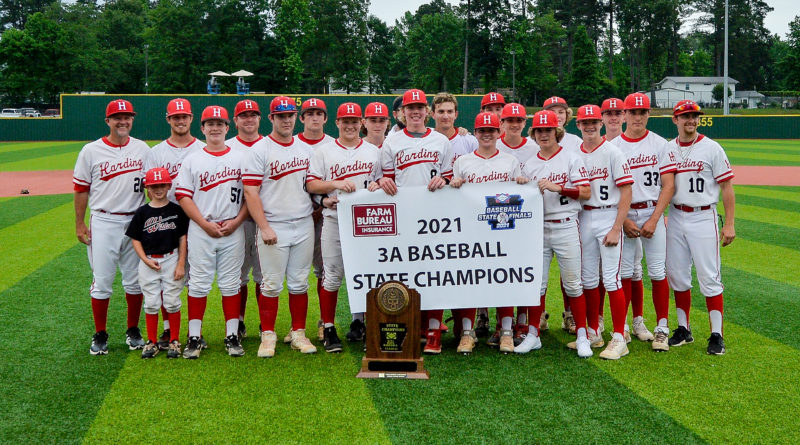 Entering the rematch with the Bobcats on Friday in the Class 3A baseball state championship game, the Wildcats were careful not to be overconfident.

“We played them before, and we beat them, but we knew we couldn’t let that get in our head,” Harding Academy pitcher Kade Smith said.

The Wildcats were indeed grounded and had no problem with the Bobcats, exploding for three runs in the first inning and cruising to an 8-1 win.

The bats were hot, and it didn’t hurt that Kade Smith, the game’s MVP, was dealing. He gave up four hits and no earned runs while walking two and striking out seven.

If Kade Smith was cool under the spotlight it was probably because this is the third state championship he’s been part of this school year. He helped the Wildcats to a football title playing safety and a basketball title coming off the bench in the post.

“Just making history, it is so fun,” said Kade Smith, who will be the Wildcats’ starting quarterback next season.

Harding Academy is the only Arkansas school to win football, boys basketball and baseball titles in the same school year, also accomplishing the feat in 2013.

“It is fun to be a part of,” said Alex Smith, a receivers coach on the football staff. “We have a lot of kids that play all three sports. It is less about the coaches and more about the players. We have some great coaches, don’t get me wrong, but we have tremendous kids that can do it all.”

The Wildcats set the tone with their three runs in the first inning. Levi Lang doubled and scored on a wild pitch. Gavin Alveti, who walked, scored on Kade Smith’s fielder’s choice. Smith scored on Chris Anderson’s single.

“You’ve got to give Harding all the credit,” Walnut Ridge coach Jason Belcher said. “They came out right away and jumped on us and got three, but we competed throughout the entire game. We had some balls that were smashed right at guys, and that is baseball. We helped them out with a couple of errors, and it is tough to win at this point.”

The Wildcats added a run in the second inning when Lang singled in Kyler Hoover.

Harding Academy continued to pour it on in the third inning with two more runs. Daniel Henley singled down the right-field line, scoring Kade Smith and Cooper Welch, who both had walked.

The Wildcats capped the scoring with single runs in the fourth and fifth innings. Alveti scored on another single by Kade Smith in the fourth. Lang’s sacrifice fly in the fifth scored Eli Wallis, who walked.

“This week has been the longest week of practice,” Alex Smith said. “In football you have a week off, but that doesn’t happen in baseball. The guys came to practice and worked hard even though (the championship game) was four or five days away. I am really proud how they came out and played today.”