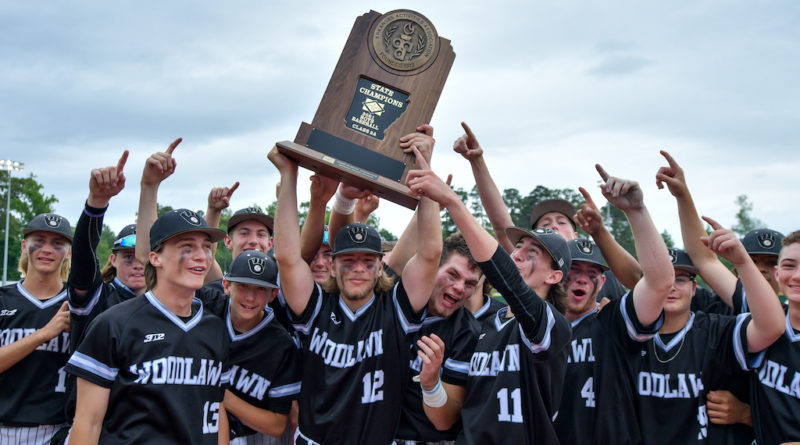 BENTON — Gus Holland turned in one of the great Arkansas high school state final pitching performances of all-time against Woodlawn in the Class 2A baseball championship game Friday morning. Unfortunately for South Side Bee Branch, his team couldn’t take advantage of it.

Holland, a left-hander, had to leave the game with two outs in the top of the seventh inning as he exceeded the Arkansas Activities Association mandated 110-pitch limit after striking out 16 batters. With Holland off the mound, the wheels fell off for South Side Bee Branch in the eighth inning with three errors, and the Bears pulled out the 5-2 extra-inning victory.

“I liked it when (Holland) came out,” longtime Woodlawn coach Tommy Richardson said. “I was ready to see something else. We’ve seen more righties than lefties, and (Holland) was hitting his spots and all of that good stuff. When he’s doing that, I’ll take the next one over the one I got.”

South Side’s Connor Bise was called on to finish the game with two outs and a runner on first base. He promptly walked a batter and threw a wild pitch. When Jaydon Manes popped up to the left side of home plate near the screen, he collided with catcher Whitt Holland, who appeared ready to secure the ball.

Bise did get Manes to ground out to end the inning.

He wasn’t so lucky in the eighth inning, however. He walked leadoff batter Jaxson Case, and Case advanced to second on a wild pitch. Garret Cowart reached when South Side third baseman Drew Raines dropped a hard-hit bunt. J.T. Grace bunted and this time Bise was indecisive with runners on board and threw to first base at the last second and rocketed it into right field. Both runners came around to score on the play.

Owen Stover promptly singled to center, plating the third and final run of the inning.

South Side managed a hit in the bottom of the frame but couldn’t orchestrate a rally.

“Earlier in the game, we got leadoff guys on, but we had some base running mistakes,” South Side coach Jeffery Liggin said. “That is part of baseball. We played their socks off and had more hits than them. We just made mistakes at crucial times. That’s baseball.”

Holland missed tying the championship game strikeout record by two. He struck out 18 in the semifinals.

Friday, he was on target, baffling the Bears, giving up just two hits and issuing one walk.

“He dealt, man,” Liggin said. “You can’t ask for anything better than a senior coming out and competing. This kid is a dude.”

In the other dugout, Woodlawn pitcher Cale Edmonds was trying to keep pace with Holland and figure him out at the plate.

“We were just swinging at not very good pitches, and he was leaving them up and we were swinging at bad pitches,” said Edmonds, who picked up the win and the game’s MVP award. “We had to change our approach. It didn’t work out (against Holland).”

“You just have to clear your head, and you can’t think about anything when you are on the mound,” Edmonds said. “You just have to relax and not have any expressions or body language or anything.”

Ethan Gardner pitched the eighth inning in relief for Woodlawn and gave up one hit and struck out two.

Woodlawn did get to Holland early, taking a 2-0 lead in the first inning when Case singled to right field, scoring Edmonds and Gardner. The Bears recorded three hits in the inning, but Holland was able to mitigate the damage by getting Stover to fly out, stranding two Bears.

South Side tied the score in the bottom of the third inning. Holland drove in a run with a single to score Parker Hutchins, who singled to lead off the inning, and Bise, who reached on a fielder’s choice. Like Holland, Edmonds avoided a catastrophic inning by getting Gage Johnson to ground out after intentionally walking Easton Swofford, leaving two runners on base.

“We knew it was going to be a dog fight from the get-go,” Richardson said. “They are a good baseball team, and I give them all the respect. We knew they weren’t going to come in here and roll over.”

The win gave Woodlawn its 22nd consecutive victory this season and the school’s seventh state title. It also marked the second time since 2019 the Bears defeated the Hornets for the championship.

“Every one of them is big,” Richardson said. “Somebody asked me the other day, which one is the biggest one? I said, ‘The next one.’ We start working on that Monday.”

“I just think it is a testament to the kids we have,” Liggin said. “They work hard, and they are really fundamental. We try to teach and coach them to be fundamental at South Side and Woodlawn. You coach guys to know where they are supposed to be on the baseball field. That’s just what happens when you have kids like that.”