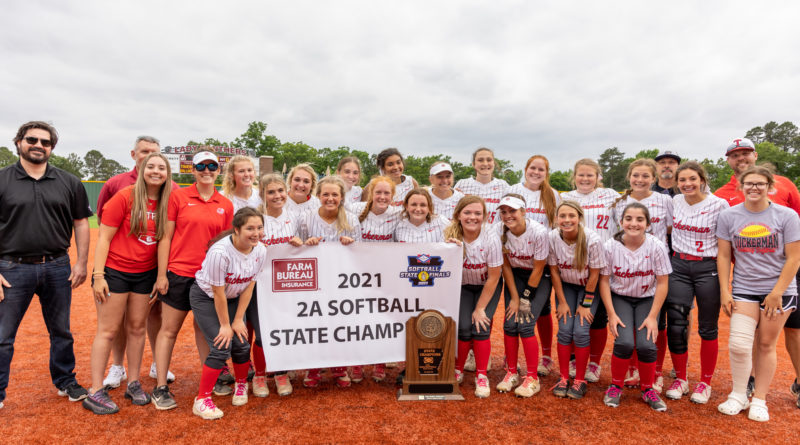 BENTON — Tuckerman took the lead in the first inning and didn’t have the advantage again until it really counted.

“You dream about it as a coach and every summer you go into the next year and dream about it,” Tuckerman coach Matt Dillon said. “’Let’s get to the state finals, let’s just get there.

Nearly 700 fans witnessed the comeback fueled by Soden, who set Mansfield down in order in the top of the seventh inning after coming on to pitch in relief.

Some Tigers miscues set the stage for the late-game heroics. No. 9 Bulldogs hitter Ansley Dawson reached when her ground ball was misplayed by Tigers shortstop Kiara Thomas. Dawson advanced to second base on a passed ball. Shanley Williams popped out to the left of home plate. Catcher Chloe Creekmore made the catch but collided with third baseman Brooklyn Adams and no one covered third base, allowing Dawson to advance after tagging up.

Soden slapped a 2-1 pitch to left field, scoring Dawson with the winning run and setting off a frenzy of a celebration.

“I could hardly make it (down to first) — I was so excited,” Soden said.

“She’s closed out all of these games for the last two or three weeks, and she has been getting hits and hits,” Dillon said. “I knew once we got that runner (to third base) she was going to bring her in. I just knew it.”

Soden, the game’s MVP, was 1 for 2 with two walks. Soden relieved starter Makaylie Gist, who allowed six hits and three earned runs with six strikeouts and one walk.

The momentum took a definite shift after the Bulldogs tied the score in the sixth inning. Soden acknowledged she had a spring in her step when she toed the rubber. She forced a ground out, recorded a strikeout and then got a fly out. She needed nine pitches to get the three outs.

“When we tied it and got those three outs and came back in, we knew it was over,” Soden said.

Dillon was confident his squad would make a comeback even after it took so long to get back on the scoreboard.

“We weren’t hitting right there in the middle of the game, but we knew if we ever got a spark, we could do this,” he said. “One through nine, we all believed in each other, and the dugout never gave up, and we were able to get that hit and win the game.”

The Tigers took the lead in the first inning. Soden walked with one out. Gracie Smith, who was 1 for 3, smashed a triple to right-center, driving in Soden.

The lead was short-lived as Mansfield plated two in the second inning. Adams singled down the right-field line, driving in Hailey Walker, who walked, and Cole Smith, who singled.

The score stood 2-1 until the top of the fifth when Edwards, who was 2 for 4 at the plate, blasted a solo home run to give Mansfield a two-run cushion.

Mansfield threatened in the top of the first, loading the bases after Edwards doubled off the wall, but Gist induced a ground-ball out and a fly out to get out of the jam, leaving three Bulldogs on base.

“We just had a couple of misplays,” Mansfield coach Donnie Eveld said. “I don’t quite know what to say, but we didn’t put the ball in play enough to score enough runs to win.

“The bottom line is you have to have more runs on the scoreboard than they do, and we just didn’t do that.”

The Tigers will lose only two starters from this runner-up team, which features a core of freshmen. Eveld already is looking to next season.

“The good thing about this team is they are a young team, and they will be back,” he said. “They are winners. It hurts right now for them, but they will be back. They are a great bunch of kids — young and talented bunch.”