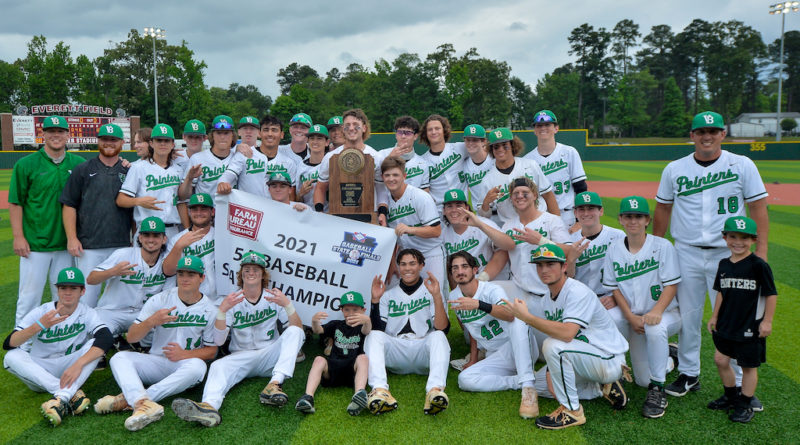 BENTON — Van Buren standout senior pitcher Connor Johnson wasn’t sure how well his arm would hold up in the Class 5A baseball championship game against Jonesboro on Thursday afternoon. After all, he had thrown 161 pitches last week in two previous state playoff games.

“Coming into it, I was nervous because I had thrown all of those pitches on short rest. I threw 101 pitches on Saturday,” he said. “I was nervous I wouldn’t be 100 percent. And then up until the game … there’s tons of people here. I mean, I have never played in a state championship game before, so it was pretty nerve-racking, that is for sure.”

Johnson, the game’s MVP, had no problems with the Hurricane in a decisive 12-1 win, giving up just four hits and striking out six with no walks on an efficient 82 pitches.

“On short rest, my fastball wasn’t 100 percent,” he said. “I was just locating it, and my breaking ball wasn’t super good, but it was effective when it needed to be. I think controlling my fastball was the biggest thing today.”

Johnson, a University of Central Arkansas signee, finishes the season 13-0 on the mound for the Pointers.

The state title is Van Buren’s first in school history. The last time the Pointers earned a state title game berth was in 2010, Weatherford’s first year in an 11-year run as assistant coach. He took over as head coach last April after longtime coach David Loyd retired.

“(A state championship) is huge for our community and huge for our program and our guys,” Weatherford said. “I told them before the game, it doesn’t matter how this goes, you guys are the best team in Van Buren High School baseball history in my book.

“Fortunately, I (also) told them, ‘Let’s go finish it off.’ And we did. But they have just been so consistent all year and have been really good.”

His players proved that by dominating a 28-6 Jonesboro club.

The Pointers added six more runs in the seventh inning, which was halted briefly by heavy rain. Three Jonesboro errors fueled the scoring.

Van Buren took the lead for good in the second inning when slugging third baseman Eli Gilreath hammered a pitch over the 355-foot sign in left-center field, giving the Pointers a 1-0 advantage.

“When Eli hit that home run in the second inning, that was huge confidence,” Johnson said. “We knew we were going to put up some runs. (Jonesboro) is a really good hitting team, so we needed all the runs we could get, but once we got that first home run, that gave me a lot of confidence to go out there and pitch.”

Van Buren (27-7) took a 2-0 lead in the third inning when Haden Roark drove in Reichard, who reached on a leadoff walk.

“Once we scored a couple … when we have Connor on the mound, we feel like he is going to hold anyone he faces down,” Weatherford said. “I think they felt that a little bit, too. It just got easier as the game went.”

Roark led Van Buren at the plate, finishing 3 for 5 with two RBIs. Gilreath was 2 for 4 with two RBIs, and Reichard was 1 for 2 with two RBI and two walks.

Jonesboro coach Mark Dobson said he felt good when his team was trailing only 2-0 in the fifth inning but was quick to credit the Pointers for closing out by shining in all facets.

“At the end of the day, (Van Buren) did the whole thing today,” he said. “They pitched it, they fielded it, and they hit it, too. Any time the ball was up, they got hits, and what do you do? You look at them and say, ‘You did a really good job.’”

Jonesboro scored in the sixth inning when Ty Rhoades singled in Will Barre, who led off with a single.

No Hurricane batter notched more than one hit against Johnson.

Jonesboro used six pitchers in the loss. Starter Josh Hyneman turned in a solid outing, going three innings and giving up three hits and two earned runs while walking one and striking out one.

“The big thing is, I hope they realize their whole season isn’t defined by one game,” Dobson said. “It’s what their goal was and what they wanted. When you get this far, sometimes it works out and sometimes it doesn’t. You face a good pitcher and guess what? He did a great job.”