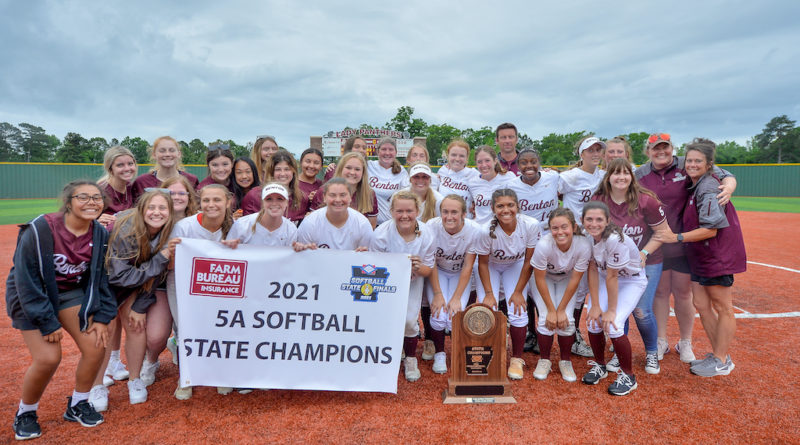 Benton scored five runs with two outs en route to an 8-1 victory over Greenwood to complete a 31-0 season. Greenwood finishes the season 25-9.

“One inning was the difference,” Greenwood coach Ronnie Sockey said. “We had our chances, but that second inning was a tough break with all five runs coming with two out and two home runs stuck in the middle.”

Aubree Goodnight started the second inning with a single off the center-field wall and was moved to second on a sacrifice bunt by state tournament MVP Tuesday Melton.

After McKenzie Worsham struck out looking, things took a dramatic turn. Shelby Samples hit a line drive to left that Kinley Fisher could not catch. Goodnight scored to make it 1-0.

“That was a tough play,” Sockey said of the error that put Benton ahead. “The wind was blowing and the ball was taking a turn away from her.”

Addison Davis followed with an infield hit to third baseman Madison Cartwright, whose throw to first was wide, allowing Samples to score to make it 2-0. Houston then drilled her first home run, a two-run shot to right field that made it 4-0.

Gilmore followed on the next pitch with a solo shot over the right-field wall to make it 5-0 and chase Greenwood starting pitcher Haven Clements, who was replaced by Victoria Howard.

“Those two home runs were a big killer,” Cox said. “Alyssa and Riley have been coming up with the big hits all year.”

Gilmore added a two-run homer in the fourth inning to make it 7-0. Houston led off the sixth inning with a home run to left to make it 8-0.

Greenwood broke the shutout in the seventh. Charlize Taylor and Macey Cutsinger singled to right, with Cutsinger’s moving Taylor to third. Claire Chapple’s groundout against Houston, who relieved Melton, put the Bulldogs on the scoreboard.

“Tuesday was great and had that shutout through six,” Cox said. “She gave us everything she had. I should have got her a little earlier, but Houston came in and did a great job.”

Added Melton: “I go out there and give it my all, and when it’s her time to come in, she shuts them down.”

After losing to Greenwood in the 2019 semifinals and having the 2020 season cut short after four games because of the COVID-19 pandemic, Melton said this was the perfect ending to the season.

“We never thought much about going undefeated, but when we started rolling, there was one way to go,” she said.

“This has been a great group all year and was very unselfish,” Cox said.

Sockey had nothing but praise for the Panthers.

“We beat them in the 2019 semifinals and they’re a lot older now,” Sockey said. “We’ve seen them mature and they’re a great bunch. They have a bunch of great athletes. They were the best team we’ve played. They had it all.”