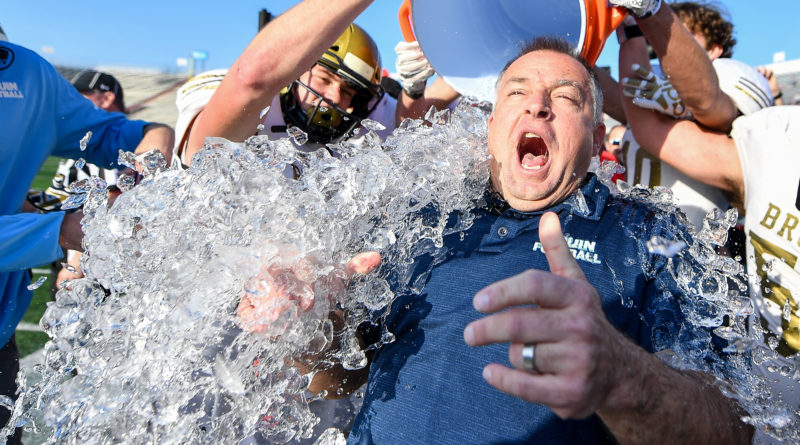 While the national media was all over “the coach who never punts” entering the FCS collegiate ranks, in Arkansas there were many prep fans rejoicing on social media. Just hours after learning the news about Kelley, whose teams won nine state championships in his 18 years, opposing fans had already left PA for dead and were looking forward to their school getting the comeuppance on the Bruins.

Well, they might have underestimated the power of the longtime coach. In 18 seasons, Kelley not only changed the culture of the football program, he changed the attitude of the entire school. Faculty, parents and administrators have all accepted the challenge of pursuing excellence and thinking outside the box to achieve it. I have spent enough time over the years on the campus to see that impact first-hand.

That won’t suddenly disappear just because he’s no longer there. The trophies, the field house facility in the west end zone bearing his mother’s name, are reminders of how powerful his philosophy has been and could continue to be.

That would be especially true if the PA administration chooses to tab one of the members of the current Bruins staff to become the head coach. New England Patriots coach Bill Belichick called Kelley the best high school coach in the nation, but his staff was also probably the best. All of them worked together tirelessly to continue to search for ways to out-scheme the opponent.

“It makes way more sense (to promote from within),” said Dirk Tanner, a former Bruins all-state defensive tackle who started on the PA 2008 state championship team as a sophomore and played in the state title game in 2010 before signing with Louisiana Tech. “There are a lot of awesome coaches on that staff.”

Not only has Kelley instilled a winning culture, he has proven that the unconventional and unorthodox is a great equalizer.

While having lunch with him once, I pointed out that what makes his team so dangerous is that not only is his offense explosive, but opponents must spend so much time during game week working on onside kicks that it takes away from their preparation for an offense that has a thousand wrinkles. It’s a defensive coordinator’s worst nightmare. He acknowledged he hadn’t looked at it that way before, but he agreed.

A new head coach promoted from within wouldn’t do everything the same, but it’s a good bet that the high-octane offense with pages full of gadget plays, the no punting rule and onside kicks would still be part of the game plan. If so, it could be same song, different verse for opponents hoping for a letdown.

“If you bring someone from the outside, they are more than likely going to implement a brand-new offense and philosophy,” said Tanner, whose older brother Zeke also was an all-state lineman on the 2008 title team. “They might also try to recreate the culture. Why do that when you have all of the momentum already? If it ain’t broke, don’t fix it.”

“They were sad, but it’s been a long ride and time for him to do something new,” said Tanner, now a real estate agent in the Little Rock area.

“We all knew it would happen at some point. It is sad, but at the same time, everyone is excited for Kevin.”