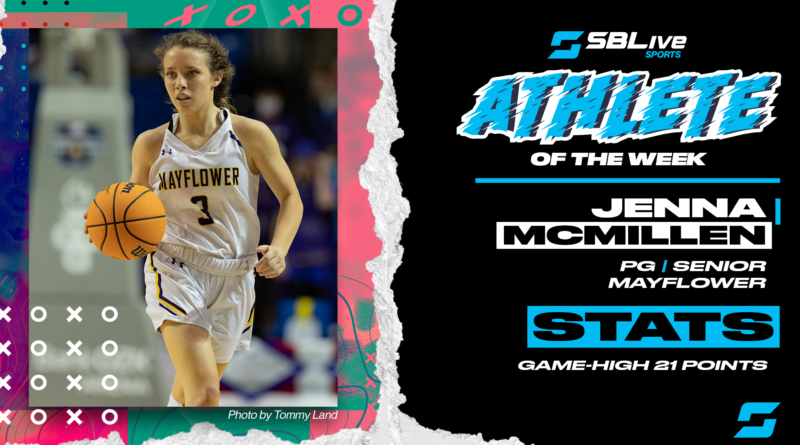 McMillen scored a game-high 21 points for Mayflower in Tuesday’s 41-30 win over Elkins in the 3A tournament.

McMillen received 41.05% of the vote, beating out Morrilton’s Cheyanne Kemp, who finished with 35.3%. Farmington’s Carson Dillard finished third with 10.47% and Conway’s Chloe Clardy finished fourth with 6.14%. There were over 34,000 votes tallied this week!

Wynter Beck, Fayetteville: She scored all six of Fayetteville’s points in overtime and finished with a game-high 22 in Saturday’s 57-56 win over Conway in the 6A semifinals.

Jaecie Brown, Hoxie: She scored 25 points, including making 10 of 11 free throws, as Hoxie toppled Dumas 61-27 on Thursday in the 3A tournament.

Caitlyn Bulliner, Fordyce: She finished with 25 points Thursday to lift Fordyce to a 51-43 win over Flippin in the 2A tournament.

Daedrianna Cail, Marion: She scored 18 points and pulled down nine rebounds Saturday as Marion beat Russellville 42-29 in a 5A semifinal.

Chloe Clardy, Conway: She made three three-pointers and finished with a game-high 30 points Friday in Conway’s 69-38 romp over Rogers in the 6A tournament.

Carson Dillard, Farmington: She went off for 29 points, including a stunning nine three-pointers, in Farmington’s 72-54 rout of Mena in the 4A semifinals Saturday.

Kinley Fisher, Greenwood: She dropped 25 points in her final game for Greenwood in a 67-60 loss to Jonesboro in the 5A semifinals Saturday.

Ereauna Hardaway, Jonesboro: She posted 25 points, including going 7 of 8 from the line in the fourth quarter, along with nine assists to lift Jonesboro past Greenwood 67-60 in a 5A semifinal Saturday.

Taylor Hernandez, Pulaski Academy: She scored 14 of her 17 points in the first half Saturday as Pulaski Academy downed Pea Ridge 43-41 in a 4A semifinal.

Cheyanne Kemp, Morrilton: She put up 30 points, five rebounds and three steals Friday to carry Morrilton to a 64-58 victory over Joe T. Robinson in the 4A tournament.

Caroline Lyles, Fayetteville: She had four three-pointers and scored a team-high 24 points Friday as Fayetteville defeated Little Rock Central 72-58 in the 6A tournament.

Kenley McCarn, Melbourne: McCarn scored 11 of her game-high 25 points in the second quarter Tuesday as Melbourne rolled past Riverside 77-26 in the 2A tournament.

Silver Mulliniks, Quitman: Mulliniks filled it up with 27 points Tuesday in Quitman’s 60-56 win over Marmaduke in the 2A tournament.

Kiera Neal, Marion: Neal poured in 18 points Tuesday as Marion rallied from a halftime deficit to defeat Little Rock Christian 60-54 in double overtime in the 5A tournament.

Haitiana Releford, Northside: She scored a team-high 16 points in Fort Smith Northside’s 53-46 victory over North Little Rock in the 6A semifinals Saturday.

Alex Rouse, Joe T. Robinson: She had a game-high 36 points, seven rebounds, six assists and four steals Friday for Joe T. Robinson in a 64-58 loss to Morrilton in the 4A tournament.

Ariana Saitta, Fayetteville: She scored 11 of her 17 points in the second quarter as Fayetteville nipped Conway 57-56 in overtime in Saturday’s 6A semifinals.

Marleigh Sellars, Salem: She poured in 22 points in Salem’s 59-43 win over Acorn in a 2A semifinal Saturday.