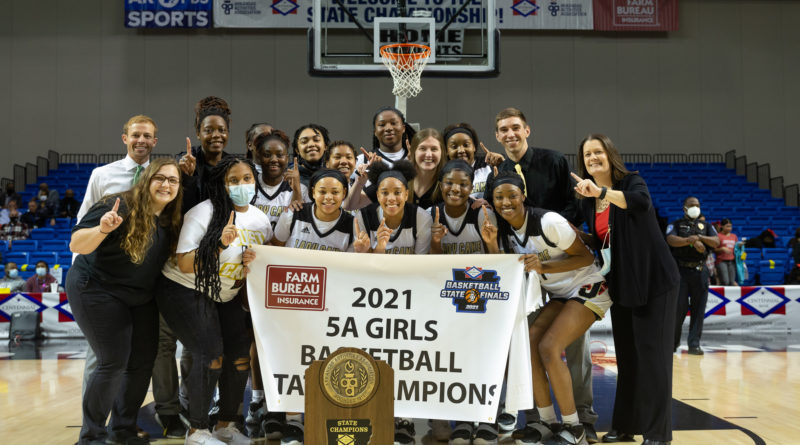 The scrappy Blue Devils, who became the first Arkansas sports program to play for a state title with a losing record, pushed Jonesboro into the fourth quarter before the Hurricane escaped with a 47-39 win at Bank OZK Arena.

“Hats off to West Memphis. This is a team that could have quit halfway through the season, easily, but didn’t,” Jonesboro coach Jodi Christenberry said. “They stepped up and kept going hard. (West Memphis coach Erica Leak) is a great coach and great person, and she had them believing at the end. That’s why they are here, and a lot of people questioned them being here and if they deserved to be. They absolutely do. They have pushed and disciplined their game to the point where they deserve to be here, too.

“We are happy to be able to come out of here with a win because it is hard to beat a team this many times.”

The Blue Devils’ story was the talk of the state this week, as they entered the game with an 11-14 record. They started 4-0 under first-year coach Leak, an all-time great Arkansas prep player and a former standout at Louisiana Tech. Then, COVID-19 struck the team with quarantine twice, and West Memphis lost 10 games in a row.

Leak also was dealing with sickness from being pregnant and at least one Blue Devils player dealt with the death of family members. All of the adversity took its toll on a team that included only two seniors.

Still, the group peaked at the right time, which is what Leak said she told her team after several close losses inside the 5A-East Conference.

“We always believed in this young group and always believed we could get it right at the end of the season,” Leak said. “I am extremely proud of their efforts. We make young mistakes, but we are going to get them right.”

Even while shooting 19 percent in the first half, West Memphis, which was led in scoring by sophomore Janiyah Tucker with 16 points, kept it close with physical play in the paint. The Hurricane led 19-17 at halftime and 31-28 entering the final quarter.

The difference in the fourth period was Jonesboro junior guard Ereauna Hardaway. The diminutive Hardaway scored nine of her 13 points in the final quarter. Her jumper in the lane pushed Jonesboro’s lead to 37-33 with 3:30 to play. Moments later, she drove the lane and found classmate Destiny Thomas, who added 12 points, inside for an easy basket to increase the advantage to six.

Jonesboro (23-6) put the game away when Hardaway converted another layup with 1:05 remaining. She topped things off by hitting 3 of 4 free throws inside the final 37 seconds.

“Everybody was excited to be back after not winning last time,” said Hardaway, who was the game’s Most Valuable Player. “We played hard, and we really wanted to win. We were talking all day about how we wanted to win. In the fourth quarter with the defense, we got some steals and got going.”

The championship is the third in the past five years for the Hurricane.

“Just being here was a dream of mine as a kid, being able to step out here on the court and play for a state title,” Christenberry said. “I never got to. We never made it that far. I’m kind of getting to live vicariously through these kids who are getting after it every day.”

With a roster that included nine sophomores and a freshman, Leak said the tumultuous 2021 season will help lead the Blue Devils to greater heights in the future.

“Being young is a plus,” Leak said. “We are going to be young again next year because we are going to move up a couple of ninth-graders. The speech in the locker room was, ‘Let’s get this right.’ We had a chance. We just have to have the mindset of, ‘Let’s get it right.’

“The girls turned it around, and we righted the storm, and here we are. Like I told them today, I made it to the finals my 10th-grade year, and we lost. I feel the same feeling. It is OK to feel that way, but don’t waste that feeling. You’ve smelled it and been through it now, and you know what it’s about. Now, we are going to make another run next year. When I was in the 11th grade, we lost it again. Finally, my senior year, we sealed the deal and got it done.”

More photos from the 5A girls final