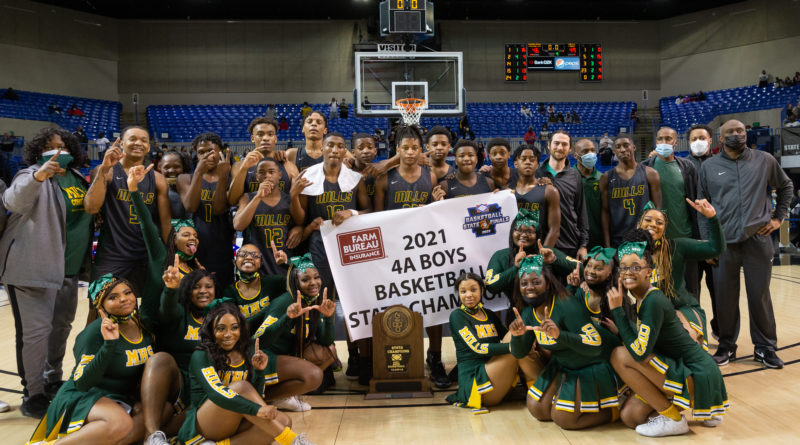 HOT SPRINGS — After beginning the fourth quarter trailing Morrilton, Mills coach Raymond Cooper was looking for a spark. He found it with his athletic star senior forward, Jakari Livingston.

Livingston slammed home an alley-oop dunk with just under four minutes remaining to give the Comets a lead they never relinquished en route to a 49-46 victory over the Devil Dogs in the Class 4A boys basketball state championship game Saturday afternoon at Bank OZK Arena.

“That’s one of the things (Livingston) has done all year,” Cooper said. “He’s come up with timely plays. He finishes in emphatic fashion, so that gets everybody going and gets the crowd going. I think it energizes our team, just the energy he plays with and the effort he plays with.”

Livingston, who has several NCAA Division I scholarship offers, scored 17 points with six rebounds on his way to Most Valuable Player honors.

“One thing about Jakari is he leaves it on the court every single night, and he is going to throw until the last buzzer,” Cooper said. “The only thing that has stopped him is cramps, but once we got him drinking water and Gatorade, he’s played great.”

Many looked forward to seeing Livingston matched up with Morrilton junior forward Joseph Pinion, a University of Arkansas commit. Pinion, who had four points at halftime, finished with 17 points. Pinion had a chance to tie the score at the end of regulation but missed a three-pointer.

“We played a decent game, but the last quarter kind of got to us,” Pinion said. “I guess we kind of folded under pressure, but we will be back next year.”

A week ago, Morrilton (20-7) snapped Magnolia’s 54-game win streak at Morrilton in the Class 4A state tournament semifinals. Devil Dogs coach Keith Zackery was happy with a season that he said has “helped build a foundation for Morrilton Devil Dogs basketball.”

“I am just super proud of these guys and how well they competed,” Zackery said. “Not just today but throughout the year. They have been a great group to work with and a great group to coach. They bring it every day, and you could just see them getting better and better.

“You always speak about a championship and getting to one, and we just kind of spoke it into existence, and their work was why we were able to get to this point. I hate it for my seniors because they worked tirelessly and did everything I asked them to do. It’s saddening to me they didn’t get to have the ultimate prize.”

The game featured 14 lead changes. Morrilton held the lead from the 5:32 mark of the third quarter into the final period.

Devil Dogs 6-foot-10 junior center Henry Cowles hit a turnaround jumper in the lane to give Morrilton a 40-35 lead with 6:48 to play.

Moments later, Livingston scored on a drive and was fouled. He missed the free throw, but the Comets were within 41-39.

Then came the raucous dunk. Jared Giddens saw Livingston streaking behind the Devil Dogs’ zone and lofted a pass high in the air. Livingston had no problems throwing it down.

“It felt real good, it got my team going,” Livingston said. “It did what I thought it was going to do.”

Pinion’s tip-in with 2:49 left cut the margin back to two.

Mills notched its biggest lead of the quarter when Jayvion Guy King made two free throws to give the Comets a 47-43 advantage.

Pinion kept the Devil Dogs in it, scoring on a slashing layup to cut the lead to 38-37 with 38 seconds left.

Morrilton immediately fouled King, who led all scorers with 19 points, and he made both shots.

The Devil Dogs had the ball with 34 seconds to go and ran the clock down before getting the ball in Pinion’s hands, but a three-pointer was off the mark and Mills rebounded the errant shot, sealing the win.

“We were looking to get (Pinion) off of a pin-down, and (Mills) did a great job of switching, and at that point, it’s in (Pinion’s) hands,” Zackery said. “He wanted to make that play and make that decision. If he hadn’t shot it, the clock would have expired. He’s been the heart and soul of the team offensively. We are OK with that shot.”

Cooper said he’s proud of the resiliency his players showed in the fourth quarter and throughout the season.

“This group has been in a lot of battles and none tougher than today, so I knew we were going to battle to the end,” Cooper said. “No other group gets on my nerves more than this one, but we’ve gotten through a lot of obstacles this year. We just kept motoring along.”

More photos from the 4A boys final