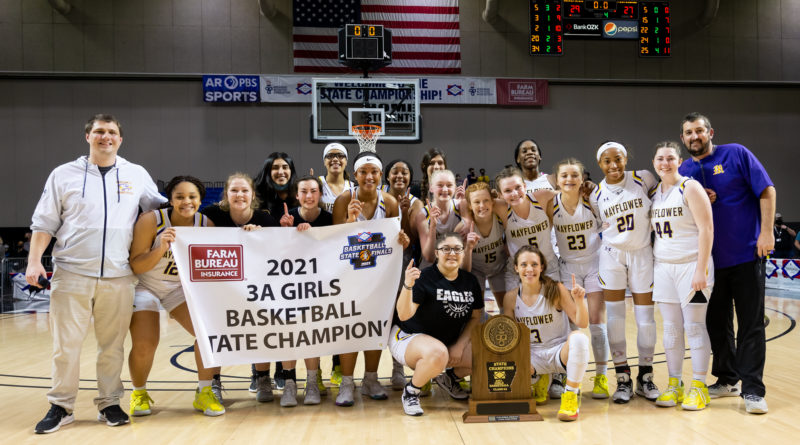 HOT SPRINGS — With a little more than a minute remaining in the Class 3A girls basketball state championship game, Mayflower coach Coty Storms told his team what he wanted to run on the final play.

Instead of calling timeout to reiterate the play call, he let his team roll. On a night the Eagles didn’t execute with great precision, senior point guard Kierra Fulton drove into the paint and found junior forward Brekayla Davis for an easy layup with two seconds left to clinch Mayflower’s 29-27 win over Centerpoint at Bank OZK Arena.

Storms, in his second year at Mayflower, was at a loss discussing the impact of the win.

“It’s still surreal to me,” he said. “Ask me tomorrow maybe. I can give you a better answer tomorrow.

“I just give all of the credit to the kids. It’s amazing.”

The Eagles didn’t take their first lead until just over seven minutes remained in the game. The Knights led by eight early in the second half but couldn’t keep Mayflower at bay.

“This game today was two good defensive teams,” Centerpoint coach John Bright said. “We just came up a little short. I just prayed we would be competitive and let everybody see how we could play. Just some free throws here or there and some little things, but it was a good game to watch. It was just tough to score for them and us.”

Mayflower trailed by two at the end of the third quarter and tied the score with 7:10 left on a short jumper by Davis. Moments later, Fulton hit one free throw to give the Eagles a 21-20 advantage.

The lead was short-lived as Marlee Bright nailed a jumper to give Centerpoint the lead at 22-21. After an empty Mayflower possession, Emily Balliette converted on a jumper from the wing and the Knights led 24-21 with 5:43 to play.

Then, Mayflower rattled off six consecutive points. Davis capped the run with a putback in the paint to give the Eagles a 27-24 lead with 3:01 to go.

Centerpoint cut into the deficit a minute later when Bright converted on one of two free throw attempts with 1:32 left.

Balliette tied the score with two free throws with just over a minute to play.

During that timeout, Storms went over a set that he thought would produce an open shot in the paint.

After milking the clock in the front court and rotating the ball to the right, Fulton got the ball back and made her move down the left side of the paint and found Davis, who led Mayflower with 10 points and grabbed six rebounds, wide open underneath for the easy hoop.

“It’s easy to (let the game play out) when you have a bunch of seniors out there,” Storms said. “They just went out and made a play. We got the right people in the matchup on that side of the floor, so we just went ahead and let them go.”

Bright was confident Centerpoint would be able to stop Mayflower and have a chance to win the game.

“We were in the same defense the entire game where we guarded their best player — we’re basically in a Diamond-and-one,” he said. “We just lost sight of (Davis) after they were moving around.”

Both teams struggled to score in the first half, but the Knights held the lead from the onset as the Eagles didn’t score their only first-quarter basket until 45 seconds remained in the period.

After leading 5-2 to begin the second quarter, Centerpoint started to pull away. Balliette’s layup with 2:03 to play gave the Knights a 12-6 advantage. Monika Flores made a three-pointer with 52 seconds left to extend the lead to 15-6. Kamiah Turner’s jumper with less than 30 seconds remaining cut the lead to 15-8, which is where the score stood going into halftime.

“We were able to get some points in the first half, but not as much in the second half,” Bright said.

More photos from the 3A girls final