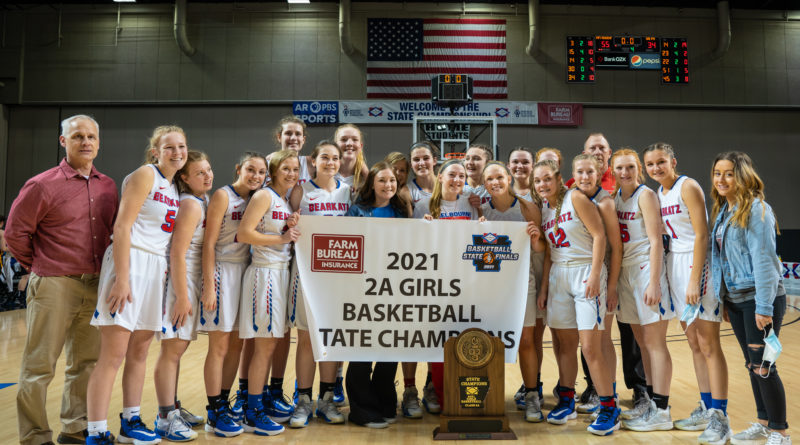 HOT SPRINGS — All that was left for a state championship was the formality of the final score Friday morning.

The Melbourne Bearkatz clinched the Class 2A title with a steady 55-34 win over Salem at Bank OZK Arena at Hot Springs Convention Center.

Now, Melbourne will wait for the final vote which will be released Tuesday by the Arkansas Sports Media to see if the Bearkatz are the overall No. 1 team in the state, which would be a rarity for a Class 2A school.

“I’m going to say yes,” Melbourne head coach Eric Teague said. “I usually don’t brag like that, but I think we are. I think this is the No. 1 team in the state as a 2A team. That’s unbelievable for a little old small town to step up and do something like that.”

Melbourne (32-1) won at Class 6A champion Northside in nonconference play as well as at Jonesboro, which will play for the Class 5A title Saturday. The Bearkatz also beat Marion, another Class 5A school.

The championship is the third in a row for the Bearkatz and fourth overall.

Teague wanted to test his team and prepare it for a run at the three-peat.

“We scheduled a very, very tough schedule,” Teague said. “We tried to prepare these girls. We kind of surprised ourselves against some very good teams. It gave us confidence. Then I knew we had a chance, and you always have a chance if you have this much talent.”

In the Class 2A state tournament, Melbourne cruised past its three opponents by a 215-85 count before Friday’s championship game.

“They have great players,” Teague said. “They’ve got two unbelievable guards that are almost impossible to stop. Their role players are very good. They’re one of the most physical teams we’ve played all year.”

The Bearkatz broke away and scored nine consecutive points. Melbourne then wrapped up the victory with the final nine points of the game.

Jenna Lawrence made two free throws and added a basket inside to start Melbourne on its way in the last quarter. Kenley McCarn added a three-point play, driving for a basket and adding the free throw after being fouled. With 2:33 remaining, she hit two more free throws to push Melbourne up 46-31.

Chelsea Hamilton canned a three-pointer for Salem, but Melbourne answered with its game-ending 9-0 run.

McCarn, who wore jersey No. 3 for Kylie Webb, who was injured in the semifinal and did not suit up for Friday’s final, scored 18 points with five field goals in eight tries, including three three-pointers, and five free throws in five attempts to earn the game’s Most Valuable Player honors. She had seven rebounds and two assists.

Melbourne was efficient in all areas, making 17 of 33 from the field, going 15 of 16 from the line and committing just seven turnovers.

Hamilton led all scorers with 19 points and kept Salem close for most of the game. She had four steals and four rebounds.

More photos from the 2A girls final