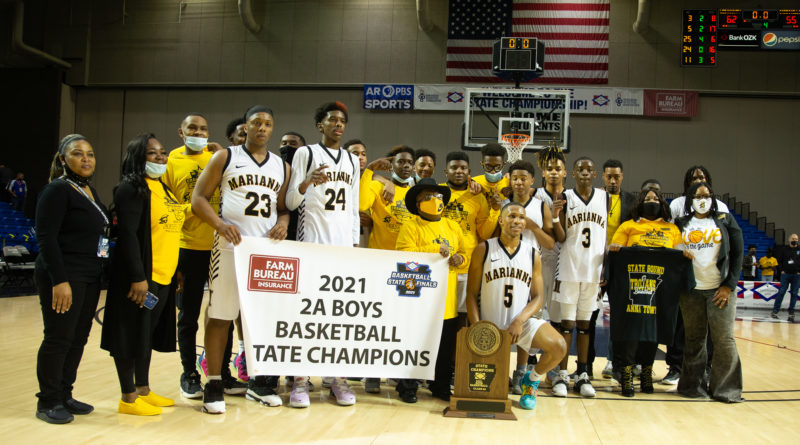 HOT SPRINGS — The Marianna Lee Trojans were clutch when it counted Friday afternoon.

Marianna scored the final baskets as time was winding down in regulation and overtime before finally winning in double overtime, 62-55, over Caddo Hills for the Class 2A state title at Bank OZK Arena at Hot Springs Convention Center.

The championship is the second in school history and first since 1983 for Marianna (22-1).

“It’s been an exciting season for Marianna Trojans basketball,” Marianna head coach and alumnus Emmanuel Wade said. “We’ve been reviving this program for the last three years. We went through a lot of phases to get tougher, stronger and more physical. I’m so proud of these guys to earn a state title. That’s such a big deal.”

Kelvin Bowers scored inside with a second left in regulation to send the game to overtime at 44-44.

Terran Williams drilled a tightly contested three-pointer from the top of the circle as time expired in the first overtime to extend the game even further at 49-49.

“Like coach tells us in practice, it’s mental,” Williams said. “I’m just going to contribute when it’s time. When our big man, Kevin Bowers, fouled out, I told myself it’s time for me to take over and take my team to the top.”

Marianna, most notably Williams, then took over in the second overtime.

Williams drove for a basket and added a free throw for a three-point play.

Je’Marion Westbrook added another three-point play, converting a fast-break layup along with the free throw for a 55-49 lead with 2:07 left in the second overtime.

Connor Kincannon drilled a three-pointer for Caddo Hills (31-5), but Markese Bolden made a free throw for Marianna and Williams added a slam with 1:10 remaining for a 58-52 lead.

“Marianna Lee’s a great team,” Caddo Hills head coach Josh Ferrell said. “They’re very disciplined. They play hard. It was a great game. My kids fought and didn’t give up.”

Williams was held to five points before his three-pointer at the end of the first overtime and finished with 17 points and nine rebounds to earn the Most Valuable Player award.

“We worked all week on trying to stay in front of him, trying to get some space where he couldn’t drive by us,” Ferrell said. “At times, we were willing to let him shoot it over us. We did a great job at trying to limit him on shots in the paint.”

Marianna jumped to an 8-0 lead but Caddo Hills stormed back to take a 19-17 lead at halftime.

Marianna’s lead in the second overtime was its first lead since the second quarter.

Except for a 40-40 tie in the fourth quarter and the ties at the end of regulation and the first overtime, Caddo Hills had a lead that stretched to eight points twice.

“They pressure the ball the majority of the game,” Wade said. “I did not think they would pressure us for 32 minutes. They didn’t go away. I’m pretty sure we got out-scrapped. That team played a fundamental style of basketball and fought us tooth and nails.”

The Indians, though, struggled from the free throw line when it counted. They converted just one of two free throw opportunities on eight occasions and only twice hit both shots of a two-shot foul.

“Free throws, we talked about,” Ferrell said. “It’s getting on the line and taking care of business, mentally and relaxing. We didn’t have a lot of success on that.”

Westbrook also scored 17 points for Marianna. Bowers had 10 points and seven rebounds before fouling out in the first overtime.

Kincannon led all scorers with 26 points. He also controlled six rebounds for Caddo Hills and had three steals.

More photos from the 2A boys final