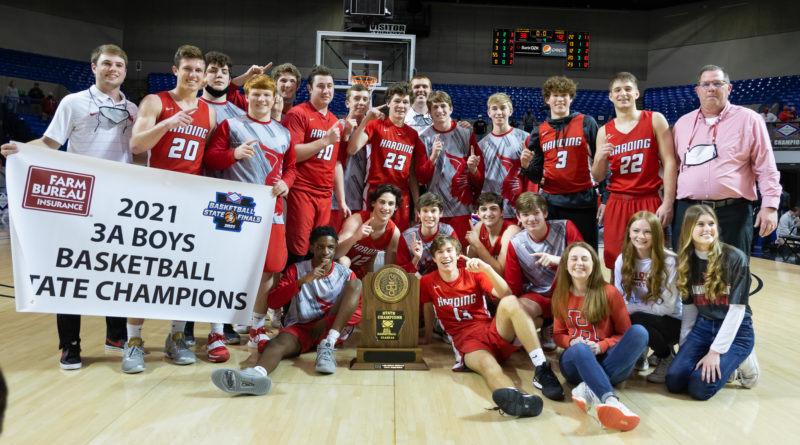 HOT SPRINGS — In a game of runs, Harding Academy had the final say.

The Wildcats trailed by nine in the fourth quarter but a 14-4 spurt allowed them to rally past Mayflower for a 42-38 victory in the Class 3A boys basketball state championship game Friday night at Bank OZK Arena.

“If you walked into the locker room, you would see on the board it says, ‘There are going to be runs tonight,’” Harding Academy coach Brad Francis said. “You can’t get too high or too low. We were feeling pretty good at half, and then (Mayflower) hits those big threes, and we take a timeout and said, ‘There’s that big run we talked about.’”

The coach said nothing seems to rattle his team.

“Since about the third grade, these guys have been winners and have done it at every level in every sport,” Francis said. “You saw when we were down nine, we didn’t get rattled, and they stuck with what we do, and we coach them. It’s just a credit to them, and, for me, I think they believe it more than I do. They just do it when the lights come on, and they are ready to go. I couldn’t be prouder of them.”

The Wildcats (21-7) continued a big school year for Harding Academy after the football team won a state championship in the fall. Several football players dot the boys basketball roster, including quarterback Caden Sipe, the MVP of the football title game, and two-way star Ty Dugger.

Sipe chipped in 11 points and six rebounds Friday, and Dugger had 10 points and pulled down six boards.

“I think even though we get a late start … if you look at our record, we aren’t too good, so it helps us peak at the right time,” Francis said. “But also, those guys know how to compete, and they know how to compete in big games, and they are physical. We look at it as a real positive.”

Carter Neal earned Most Valuable Player honors with 12 points and eight rebounds to lead the Wildcats.

The Eagles (26-4) finished an impressive campaign as state runner-up after reaching the semifinals a year ago.

“We had a great year with a great bunch of guys,” Mayflower coach Brent Stallings said. “They have been fantastic since the seventh grade and worked hard and got to the pinnacle. We just didn’t quite make it to the very top.

“Congratulations to Harding Academy. They played a great ballgame and made it very difficult for us to score and execute.”

Harding Academy had a 19-14 halftime lead and the momentum much of the first half, but with just under seven minutes to play, the Wildcats were on the ropes.

Then, Harding Academy went to work. Neal hit a three-pointer with 4:01 to play to cut the deficit to 36-30.

Moments later, Neal grabbed a steal and scored on a layup to make it 36-34.

Neal lengthened the lead to 39-36 with two free throws with 1:36 remaining.

Mayflower pulled to within one point but Sipe hit 1 of 2 free throws with 17 seconds left to push the advantage to 40-38.

Eagles star Braxtyn McCuien, who was held to three points, looked to at least tie the score when he flew into the lane on a fast break with eight seconds left. He made the layup but was called for a charge.

“I’m thinking, ‘Hopefully, it’s a charge,’” Neal said. “The ball went in, so if it wasn’t a charge, it would have been an and-one. Once we drew that charge, it was all happiness.”

Stallings was good-natured about the call after the game and said he’d have to see the replay.

Dugger made two free throws with seven seconds left to give the Wildcats a 42-38 lead and seal the win.

McCuien was tearful after the game and blamed himself for the loss after going 1 for 8 from the field. The Wildcats also held co-star Westin Pickell to two points.

“All week in practice, we kind of said we need to be really physical with him and not let him get going because when he gets a head of steam, he can really get going,” Dugger said. “Our game plan on him was to be very physical and get in his grill all game. I don’t think he likes that. … But, he’s a very talented player, though.”

Gilliam and Brandon Patterson led the Eagles with 14 points apiece.

More photos from the 3A boys final