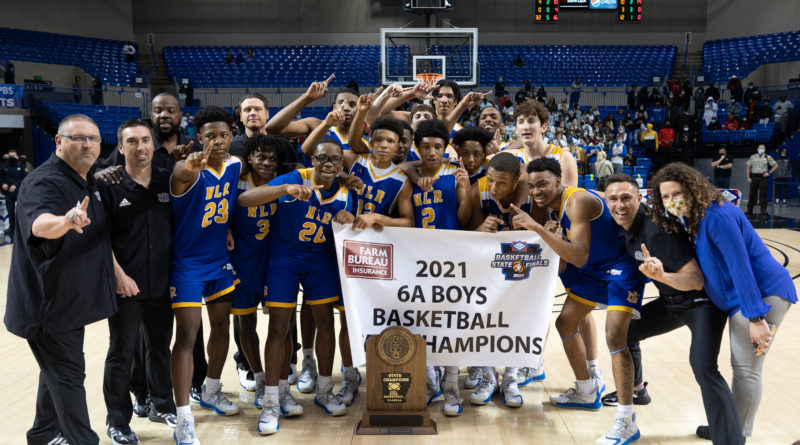 “We’ve been here before,” Rice said. “This is our sixth time in nine years, but this win right here was the biggest program win that we’ve ever had. These are guys that have been here, stayed here and wanted to be here. They bought-in to their role, played hard and didn’t care who did what.

“This is the biggest program win in North Little Rock history.”

The championship matchup at Bank OZK Arena at Hot Springs Convention Center was between two of the oldest big schools in the state and long-time rivals.

Rice, a North Little Rock graduate and coach for his alma mater for 30 years, knows the historical significance of the school’s 10th state championship.

Central was a co-champion last year, the 19th state title in school history. The Tigers were scheduled to play Conway in the final before the COVID-19 pandemic canceled the game. They beat North Little Rock twice, 80-73 and 75-67, to win the 6A-Central championship this season.

Thursday, Central looked to make it two in a row with a quick 18-8 lead late in the first quarter before North Little Rock battled back, closing to within 28-26 at the half.

“Early in the game, we hit shots outside,” Central head coach Brian Ross said. “There were some turnovers that switched the momentum in the third quarter. I don’t know how momentum has to do with missing those fourth-quarter shots, but it sure felt like it.”

North Little Rock took its first lead in the third quarter, but Central still led, 47-46, heading to the final period.

Smith scored on three consecutive knifing layups to push the Wildcats ahead 52-47 with 5:14 left. One was off a steal, which was one of seven fourth-quarter turnovers for the Tigers.

Kel’el Ware scored inside and added a free throw after being fouled on the play for a 55-47 cushion with 4:24 to go.

Central went without a field goal for more than nine minutes before Corey Camper scored with 42 seconds remaining. North Little Rock had the game in control at that point.

“That’s probably the best defense we’ve had to play against all year,” Ross said. “They did a great job, especially in the fourth quarter.”

Rice credited the dominance of Ware along with Smith’s run to open the fourth quarter.

“(Ware) is the most dominant player in 6A,” Rice said. “(Smith) changed the game. They were really playing off each other.”

Ware was 7 for 11 from the field and added five free throws in six attempts in the first two meetings of the season.

“I like it when I get touches,” Ware said. “There’s really nobody that can stop me when I go up. I knew it was part of the game plan.”

Smith finished with 26 points, making 9 of 12 shots from the field and 7 of 10 from the line. He added six steals, four rebounds and an assist.

The championship was especially gratifying for Cotton, who led North Little Rock to three consecutive championship games in football as an all-state quarterback but with no titles to show for it.

“I’m excited, I’m ecstatic, knowing I got a championship,” Cotton said. “I wasn’t down. I was just focused on putting everything I had in this basketball season.”

Cotton was more of a role player on the basketball court than his role as a quarterback, coming off the bench for the Wildcats.

Camper led Central with 16 points. Hudson Likens added 13 points, including going 10 for 10 from the line. Bryson Warren had 10 points and four steals.

More photos from the 6A boys final