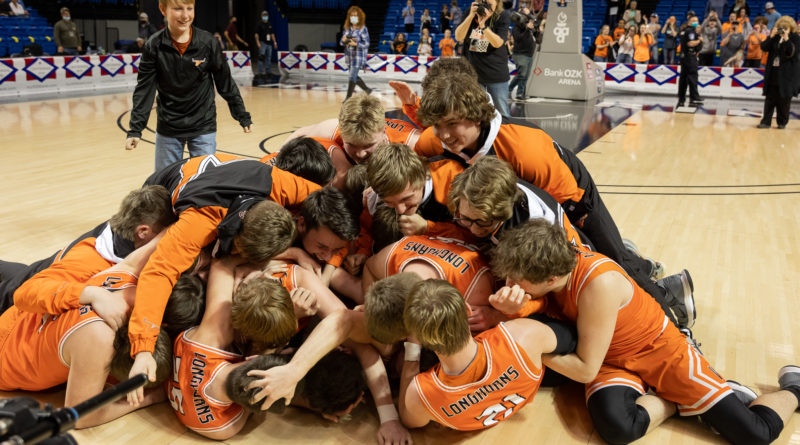 HOT SPRINGS — Championship rings were being flashed during the summer in Viola after Rick Luna took over the Longhorns’ basketball program in June.

Thursday night, they added another one with a convincing 62-47 win over conference foe Greers Ferry West Side for the Class 1A state title at Bank OZK Arena at Hot Springs Convention Center.

Luna took over at Viola after winning a state championship at Dora, Missouri, last year with a 32-2 mark. When his contract wasn’t renewed, he was hired at Viola. With him, he brought his triplet sons, Bryson, Mason and Auston, for their senior seasons.

“They jelled from the get-to,” Luna said. “The first couple of weekends, I had some Viola guys up at my house and my guys were down at Viola. It was never about me. It was about we.”

The triplets combined for 40 points and 16 rebounds Thursday.

Mason was named the game’s Most Valuable Player after scoring 21 points with three assists, three rebounds and two steals.

There’s also a younger brother, Landon. But Mason Luna insisted he actually has a whole team of brothers.

“These guys are all my brothers,” he said. “They welcomed us with open arms. We could have butted heads early in the season. They took on a little different role than they had last year. It worked for us. We won a state championship.”

The Luna family made it two championships in two seasons in two states, but Coach Luna knew Viola already had championship bloodlines after last year’s state championship in baseball.

“Bringing guys in that had been there and done that helped,” Luna said. “The Viola guys are no stranger to success. They’re coming off a baseball championship. There were a lot of rings being flashed around with egos and stuff. That all simmered down.”

Viola (37-6) was considered one of the top teams in Class 1A all season. Thursday, the Longhorns proved it with an overwhelming second half.

“Coming in and learning a new system, it shows the heart and toughness they have,” Luna said. “You always want those kids that play with motors, and I feel like I have a whole team full of them. They won’t stop. They won’t give up. They refuse to lose.”

The game marked the fifth meeting of the season between the two teams with West Side (27-8) winning once in conference play. Viola won in the district and regional tournaments.

“We changed some things, and I felt like we had a good plan,” West Side head coach Keith Brown said. “They’re a very good team. They’re hard to take care of the ball against. That got us at times.”

Viola forced 23 turnovers and turned them into 27 points.

Each team had a scoring flurry in the first half with West Side scoring 12 consecutive points to take a 16-8 lead on Ashton Klepko’s basket to open the second quarter.

Viola had two runs in the second half that were the difference.

Leading just 31-27, Viola scored 10 straight points in the third quarter. Bryson Luna sparked that spurt by going coast-to-coast after grabbing a defensive rebound for a layup and free throw to cap a three-point play. He also hit two free throws in the run. Harris drained a three-pointer and ended the run with a steal and layup for a 41-27 lead with 4:03 left in the third quarter.

With West Side within 46-34 after three quarters, Viola started the fourth quarter with a 7-0 run that put the game away.

Blaine Marberry opened the quarter with a free throw and then scored inside. After Mason Luna hit two free throws, Marberry added a layup to put Viola up 53-34 just two minutes into the final period.

Malachi Miller led West Side with 18 points, including 10 in the first period to pace the Eagles to their first-quarter advantage, and a team-high eight rebounds. Travis Gentry, whose mom won a state championship at the school as a player, added 15 points.

More photos from the 1A boys final