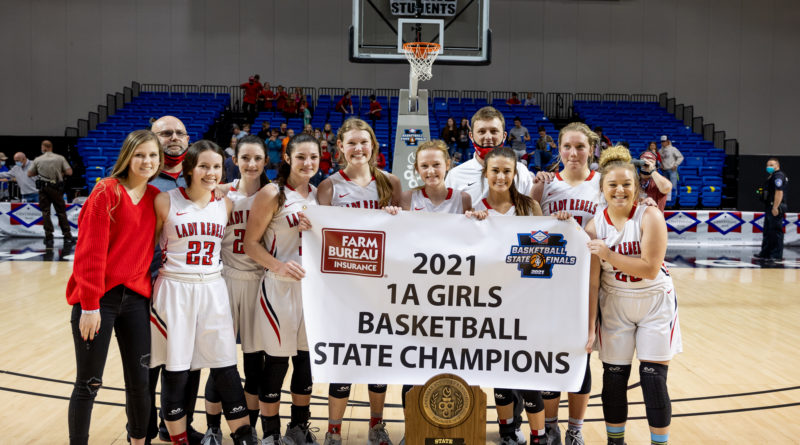 His Rebels rallied in a big way, winning their first state title with a second-half rally and a 48-40 victory over Norfork at Bank OZK Arena at Hot Springs Convention Center.

“We shot poorly the first half,” Cornett said. “It could only go up.”

After Bailey Perry made a three-pointer for Rural Special (24-4) for the first points of the game, the Rebels didn’t score again until the second quarter and trailed 21-14 at the half.

Rural Special reeled off the first 14 points of the third quarter behind a couple of three-pointers by Gabbie Welch, two free throws and a basket off an offensive rebound by Perry, a driving layup by Abbey Linville and a jumper from Kylan Stevens.

The Rebels took a 31-30 lead into the last quarter with their strong third period, but Norfork (21-12) had a run of its own to start the fourth.

Keely Blanchard scored inside and made two free throws, and Kiley Alman bagged a three-pointer as Norfork took a 37-31 lead within the first minute of the final quarter.

Brinley Morgan ended Norfork’s run with a three-pointer. Alman answered with a free throw for Norfork, but Perry grabbed an offensive rebound and scored to start Rural Special on a game-clinching run with 3:42 left.

Welch hit a three-pointer as Rural Special took the lead for good at 39-38. Linville added a free throw with 1:21 left, then two free throws with exactly a minute remaining.

After Hannah Bryant scored inside for Norfork, Morgan limped to the free throw line after being fouled intentionally and swished two free throws. On the ensuing possession, she added two more free throws with 21 seconds to go.

Linville, who was named the game’s Most Valuable Player, secured the victory with two more free throws with 3.9 seconds left.

“We’re down in the fourth quarter, and it doesn’t matter,” Cornett said. “We kept on grinding and chipping away and making the next play.”

“We went into halftime and talked about turnovers,” Norfork head coach Will Stewart said. “Sixteen turnovers is not going to get it done.”

Linville scored seven points and added six assists after her 25-point semifinal performance against Valley Springs. She had three steals and two rebounds.

“We got to the finals, and Norfork had never done that before in girls or boys basketball,” Stewart said. “We just came up short.”

“It’s been crazy this year with everybody going through it,” Cornett said. “We’ve been resilient throughout the year. I’ve got three seniors that we’ll miss. I can’t tell you how proud of them I am. They just keep making the next play all the way through.”

More photos from the 1A girls final