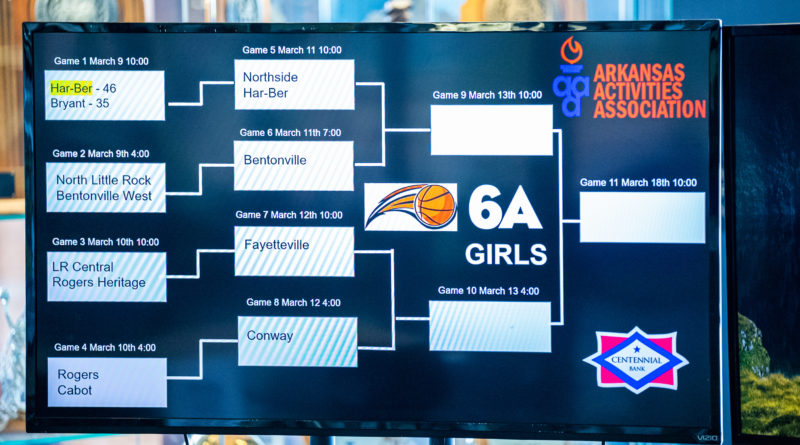 FAYETTEVILLE — Top-seed Fort Smith Northside looked like it was taking a cakewalk straight to the Arkansas 6A girls state championship game with the way the Bears played early in Saturday’s semifinal, leading by 20 points in the first half.

But North Little Rock had other ideas, storming back to tie the score with less than four minutes to play. In the end, senior Jersey Wolfenbarger and her Bears teammates stepped up defensively and made free throws down the stretch to hold on for a 53-46 victory, setting up a date with Fayetteville in next week’s state championship game in Hot Springs.

“I thought we did a good job of capitalizing off of the intensity and emotion of the game, and I think that’s what led to the win,” said Wolfenbarger, a McDonald’s All-American who finished with 15 points despite facing double-teams most of the game.

Northside coach Rickey Smith said he could see it in his players’ eyes, even before they took the court.

“It started in walk-though this morning at 7:30 — I could tell they were ready to play,” Smith said. “We played about as well as we can play early, but then kind of relaxed, got a little bit tired.

“But, you’ve got to give North Little Rock credit, because they didn’t back down. They didn’t quit. Weaker teams would have quit.”

With the 6-foot-6 Wolfenbarger drawing most of the attention from the Wildcats defense, junior Haitiana Releford scored 12 of her team-high 16 points in the first half. After sinking two free throws, Releford got a rebound and putback with 3:58 left in the first quarter to put Northside in front 11-1. Two minutes later, she went the length of the court for a layup and an 18-4 advantage.

“I know that if they are keying on Jersey, I have to play that much harder to help her and the rest of my teammates,” Releford said. “I was just able to find ways to score.”

Tracey Bershers opened the second quarter for the Bears by muscling up for two underneath, then watched Releford extend the lead to 25-5 with a driving layup.

Wolfenbarger knocked in a shot off the glass midway through the quarter, but she also was finding other ways to contribute.

“Whether it was defensively, rebounding, assists, steals — just anything I could do to help my team,” she said. “I think we did a great job of sticking together and everyone doing their part. It’s a collective effort; no one can do it alone.”

North Little Rock (19-9) started to show positive signs before the intermission, as Destine Duckworth scored six consecutive Wildcats points, including a 15-foot jumper to make it 27-11. North Little Rock ended the half on a 5-0 run, with a buzzer-beating three by Jasirae Vick trimming the deficit to 12 at the break.

“I really couldn’t be prouder of my girls, with the way they came out and gave me everything they had today,” North Little Rock coach Daryl Fimple said. “We knew we were going to be in for a fight, because Northside is a big, physical, talented team. But the way my girls came out just shows the heart and desire they have.”

The biggest boost for the Wildcats in the second half came from point guard Arin Freeman, who scored 13 of her game-high 19 points in the final two quarters. Freeman, the daughter of former Arkansas Razorbacks point guard Allie Freeman, showed a lot of her father’s tenacity with the ball, either getting to the basket or finding open teammates.

Freeman scored on a spin move in the lane, then converted a steal into an uncontested layup to cut Northside’s lead to eight, as part of a 12-0 Wildcats run. She opened the fourth quarter with consecutive layups, and a few minutes later she drove for another layup to tie the score with 3:50 to play.

“Arin is just a special player who is going to give you everything she has to try and win the game,” Fimple said. “She really kept us in it down the stretch.”

Late in the game, Northside began to double Freeman, forcing the ball from her hands. That seemed to favor the Bears.

“Freeman was killing us, so we started double-teaming her and decided to do what they were doing to us,” Smith said. “We double-teamed the ball to make her give it up, and I thought that was a key in this game.”

Northside (25-2) scored the final seven points, making 7 of 8 from the free throw line, to put the game away.

The Bears will face the top seed in the West, Fayetteville (19-6), on Thursday at 10 a.m. at the Bank OZK Arena in Hot Springs.

Fayetteville sophomore Wynter Beck rose to the occasion Saturday in the 6A girls state semifinal against Conway.

Trailing by a point in overtime with a trip to next week’s state championship game on the line, the 5-foot-7 guard drove and laid the ball in just before the final buzzer to lift the Bulldogs to a 57-56 win over the Wampus Cats.

Making plays should be nothing new to the youngster, whose father, Corey, led the Arkansas Razorbacks to the 1994 national championship, and whose sister, Coriah, was a standout for the Purple Dogs last season.

Beck scored all six of Fayetteville’s points in overtime, finishing with a game-high 22.

The Bulldogs trailed 13-11 after the first quarter, then took a three-point deficit into the intermission. Arianna Saitta scored nine of her 17 points for the Bulldogs in the second quarter.

With Beck and senior Claudia Bridges each finding range with three-pointers in the third period, Fayetteville took a 43-41 lead into the fourth quarter. Beck made two late free throws to send the game to overtime, 51-51.

Fayetteville, which was headed to the state championship game last year before COVID-19 struck and canceled the game, will have another opportunity against a familiar foe in Northside. The Purple Dogs and Bears will tip off Thursday at 10 a.m. at the Bank OZK Arena in Hot Springs.