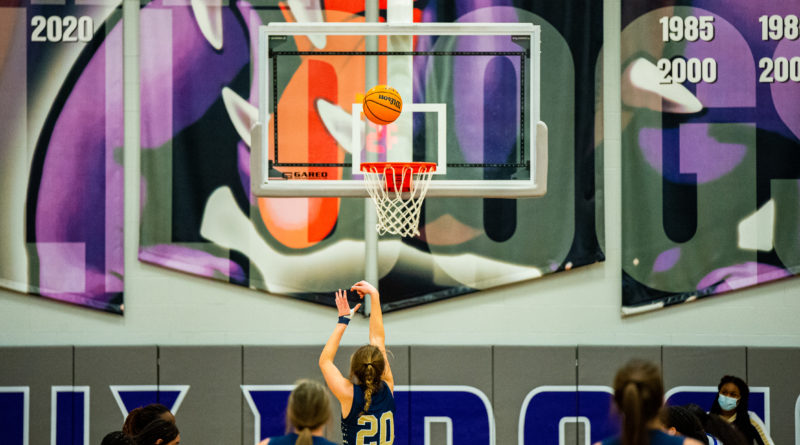 FAYETTEVILLE — Fayetteville coach Vic Rimmer remembers the phone call like it was yesterday.

His team was loaded with talent and senior leadership, including McDonald’s All-American Sasha Goforth, and had the 2020 Class 6A girls state championship within its grasp.

Then the pandemic swooped in and took away that opportunity. And although Fayetteville and Bentonville, the other finalist, were each awarded a state championship after the final game was canceled, it just wasn’t the same as settling it on the court.

“It just leaves you a little bit empty, still saying you are state champs, but not getting to play the game,” Rimmer said after watching his current team begin another state-title run Friday with a 72-58 win over Little Rock Central on the Bulldogs’ home court.

“The way that season just tapered off and never really ended just left us — and especially our seniors from last year — feeling like it was unfinished business.”

Fayetteville (17-6) hopes to leave no unanswered questions at the end of this season’s final run, which began with Friday’s competitive battle against a young Central team in the quarterfinals of the state tournament. Sitting in the bleachers, courtside, was a group of last’s year’s seniors, who are in full support of seeing this team finish business.

“Even the ones that are now away for college are calling and texting, just really wanting us to get back and win it,” Rimmer said. “So, it’s a pretty big deal for them, also.”

The Tigers (13-12) jumped out to a 5-0 lead, but Wynter Beck finally put the Bulldogs on the board with a three-pointer at the 5:47 mark of the first quarter. From there, the teams seemed to trade baskets, until Fayetteville picked up the pace and started to take advantage of some Central mistakes in the second quarter.

After junior Caroline Lyles converted a three-point play to begin the quarter, senior Claudia Bridges hit a jumper from 10 feet. Following another Tigers turnover, Lyles electrified the home crowd with a three-pointer from the wing to put the Bulldogs in front 25-16.

“When we get into that flow of the game, we play very well together, and we were able to get that flow going early in the game,” Bridges said. “We just started making shots today and the crowd just went crazy, so it’s really fun when the crowd is able to make the game more exciting.”

Sophomore Lauryn Pendleton was keeping the Fayetteville defense on its toes as she paced Central with a game-high 25 points. She led the Tigers out of the halftime break with a rebound and putback, then a runner off the glass, to cut the lead to 39-34.

“We’ve got some resilient kids, but I really feel bad for our seniors,” Central coach Marlon Williams said. “We’ve got a new staff and we are just trying to build that culture, and I love my kids, the way they fought to the end.”

Lyles nailed a three late in the third quarter before Central’s Jordan Marshall responded with a layup on the other end. Before the Tigers’ defense could get back down court, Bridges made another three from the top of the key at the buzzer to put Fayetteville up by 11.

“We just tried to bring energy from the start, to try and outrun them. I think it worked for us,” Lyles said. “My mentality is that if there’s a ball near me I need to grab it, because that’s just another opportunity for me or someone else on my team to score points.”

Lyles refused to let up on either end of the court, scoring nine of her team-high 24 points in the final quarter.

“We want it even more now,” she said, referring to the way last season ended. “We just want to get back to Hot Springs and have another chance at it.”

Central cut the deficit to 65-55 with just over two minutes remaining, but the Bulldogs went on a 7-0 run down the stretch to put the game away.

Lyles also gets extra motivation playing for her mom, Donna, who was her biggest fan and her ride to many practices and games. Donna lost her battle with cancer in 2019, but she left the inspiration of a lifetime.

“I still pray every day, ‘This is for you, Mom’,” Lyles said. “So, I go out there every game and just want to make her proud. It is definitely a big-time motivation for me.”

Rimmer wasn’t surprised at how well his team moved the ball and shot in the tournament opener, but he knows it must continue.

“Those kids just make shots, and this is the best offensive team, as far as points go, that I have ever coached,” he said. “Offensively, those kids, particularly Caroline and Claudia, they just know how to score. They can make the three, they can make the mid-range jumper, and they are really good at the rim, too.”

“Everyone loves to score, but you also have to play good defense to be successful, and that is something we have concentrated on heading into this tournament,” she said. “This means a lot this year, and I know it means a lot to every player that was on the team last year, as well. Especially to be able to play in the state tournament at our place means a lot to us.”

The win puts Fayetteville back in the state semifinals for a showdown with Conway on Saturday at 4 p.m. The winner will advance to next weekend’s state title game in Hot Springs.

In 2019, Fayetteville lost in the semifinals to Fort Smith Northside in triple overtime, then returned the favor in last year’s semifinals. Little did the Bulldogs know at the time that it would be their final game of the season.

“So, we are getting ready to play the state championship game against Bentonville on March 14, 2020,” Rimmer recalls. “The day before we were supposed to leave to go to Hot Springs, we had just finished practice and I got a call from Steve Janski, my athletics director. And I know what he’s about to tell me.

“He said, ‘Coach, we’re postponed.’ So at the time, we thought we might play the following weekend, but then we kept getting into May, June, July. Nope.”

It was extremely difficult for the seniors, including Goforth, who is now playing at Oregon State, and Coriah Beck, who is playing at Memphis. But it also left the door open for this season’s team to do something special.

“It has been a motivating factor for sure, but each team has its own character,” Rimmer said. “And this team’s identity is completely different from last year. This class of seniors it wanting to make their own journey.”