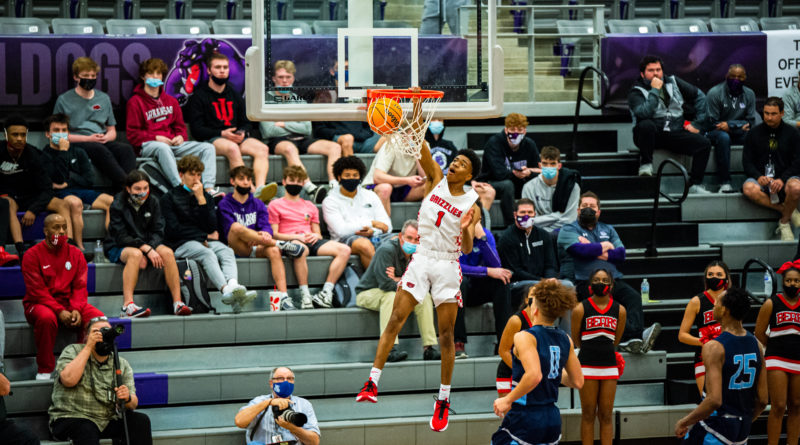 So, when someone brought up the fact the Grizzlies have won the past two Class 6A state championships in odd years — 2017 and 2019 — and are vying for another title now, in 2021, he just shrugged it off.

“I hadn’t even thought about that, to be honest,” Burnett said. “Right now, it’s just a matter of these guys stepping up and playing good basketball.

“I do think our guys are hungry, and they want to show people that they are better than what they have been showing the past couple of months.”

Northside (12-12) has been hampered by COVID-19 protocols more than most teams this season and has had its full team intact for only the past two weeks.

But overcoming the odds in the state tournament is nothing new for Burnett and his troops, who opened this year’s tournament as the fourth seed Wednesday with a 55-48 victory over fifth-seed Springdale Har-Ber inside the Fayetteville High School Gymnasium.

The victory earned the Grizzlies a date with top-seed Fayetteville (22-5) on Friday at 1 p.m.

“Our teams just get better and better with each game, and that’s what it’s all about to be successful,” Burnett said. “It’s not where we start, it’s where we finish.”

Northside actually started a little slow against Har-Ber, as Jermaine Tilford got rolling early with a dunk and a soft 15-foot jumper to put the Wildcats in front 21-15 early in the second quarter. But the Grizzlies stepped up the pressure defensively, creating two steals that led to layups. Sundquist Church’s basket just before the intermission sent the Grizzlies to the locker room with a 28-24 lead.

“We did come out kind of slow, but that’s expected in the first round of the state tournament,” Burnett said. “This COVID has kept us up and down, and we just really got our team back together. Hopefully, the next round we can relax a little and come out ready to play.”

After going scoreless in the first half, Northside senior Jacob Joe knew he needed to step up in the second half to keep his team from an early exit. The 6-foot-1 guard is the only returning starter for the Grizzlies this season, and he is the only player left who received significant minutes during their 6A title run two years ago.

After coming in averaging 11.7 points per game, Joe led the team in scoring in the second half, with all nine of his points coming after the break. He added three rebounds and an assist.

“We really played well down the stretch, so I’m proud of my guys,” Joe said. “Now, we’ve just got to get ready for the next game.”

Joe also has to deal with the expectations he sometimes unfairly receives by being the younger brother of former Arkansas Razorbacks star and current Philadelphia 76ers guard Isaiah Joe.

“I just try to block it all out, because I’m me and he’s him — we are two different people,” Jacob Joe said. “I just go out and try to do the best that I can do.”

Joe got the Grizzlies rolling early in the third quarter with a three-pointer, then watched teammate Sam Roper knock down one of his four three-pointers, extending the Northside lead to 38-29.

“That’s what Sam does: He can shoot the basketball extremely well,” Burnett said. “They were sagging back, trying to contain our big guys, and I think Sam knew that he was going to have a lot of opportunity for some open looks.”

As his teammates hit from the outside, Grizzlies big man Jordan Wright was too much for the Wildcats to handle inside, tallying a game-high 16 points and 12 rebounds.

“I thought Jordan did a great job, especially on the defensive end,” Burnett said. “He was around the ball the whole game, had a lot of blocks and a lot of rebounds. So, that helps us get our transition game going to score some points.”

A three by Aaron Oliger pulled Har-Ber (18-9) within six midway through the fourth quarter. But that was as close as the Wildcats would get. It was Joe who sank the final two free throws with 16.6 seconds left to put the game away.

“I feel like we are coming together — the chemistry is getting there,” Burnett said. “But this has been a crazy year and you never know what’s going to happen. We’ve just got to go out there and play.”

For Joe and the rest of the seniors, this is their final run and they want to make is special.

“It’s always a different situation when you get to the state tournament, and anybody can get rolling and come out with a state championship,” he said. “I’ve been here playing for a state title before, so now I’m trying to get the rest of my guys back there. It’s going to take a lot of focus and hard work, and we are going to have to bring it every game.”