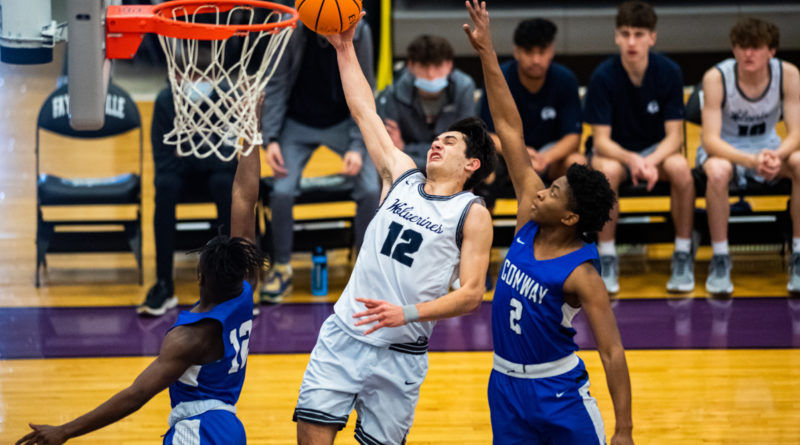 FAYETTEVILLE — Those who attended the opening round of the Arkansas high school boys basketball Class 6A state tournament Tuesday received more than their money’s worth in Game 1, as fourth-seed Bentonville West outlasted fifth-seed Conway, 59-56, in double overtime.

West junior Riley Buccino grabbed an offensive rebound and scored on a putback with 26 second left in the second overtime to put the Wolverines ahead, 57-56. After a Conway jumper was off the mark, Buccino was fouled and went to the line with 5.3 seconds remaining. He knocked down two free throws to set the final score, assuring West of another game Thursday, against 6A Central champion Little Rock Central (21-4).

“I was having a rough game early on — my shots weren’t going in, but I knew I just needed to settle down and step up for these guys,” said Buccino, who scored six of his 12 points in the two overtime periods. “So, at the end, I wanted to be at the line to make those free throws.”

West coach Greg White was simply happy to see his young players have an opportunity to play on this stage, after the threat of COVID-19 all season.

“With COVID, this seems to have been the longest year of my life, but I am so happy for our kids that we got to keep going,” White said. “We just try to stay happy and healthy as we prepare, and it’s a good feeling for our kids, for sure.”

Sophomore Tucker Anderson sparked the Wolverines (18-12) from the opening tip, scoring 11 of his game-high 21 points in the first quarter. The 6-foot-5 guard stroked three early three-pointers and added a nifty behind-the-back maneuver for an uncontested layup to put West up 12-5 midway through the period.

“I knew I needed to step up in this tournament for my team,” Anderson said. “We came out blazing and had a really good first half. We kind of struggled shooting the ball in the second half, but we just kept going and going.”

Conway’s dynamic guard duo of DJ Lockhart and Paul Harris began to heat up outside, as 6-foot-5 senior Jayden Williams dominated down low. Williams finished with a team-high 17 points, nearly half coming on putbacks.

“We were on a good run early, but their big guy (Williams) is so tough,” White said. “He kept us on our heels in the paint, so our kids just had to make plays down the stretch.”

Dawson Price made two free throws late in the second quarter to give West its largest lead, 28-15. A tip-in from Williams pulled the Wampus Cats within eight, before the Wolverines took a 32-22 advantage into halftime.

“For us, it was poor flow early, and West does a great job with spreading the floor with shooters,” Conway coach Salty Longing said. “We knew going in that we would have to defend a spread floor of shooters, and that has been tough for us to handle this year.”

The teams traded baskets through the third period before Conway began to retaliate in the fourth, as the Wampus Cats (8-13) outscored West 13-5 down the stretch. A tip-in by Williams knotted the score at 43-43 with 1:55 left in regulation.

After another three from Anderson put the Wolverines back ahead, Lockhart drained one from the top of the key to tie it again, at 46-46. Each team turned the ball over in the final seconds, sending it to extra time.

“I think the game was pretty ugly, and both teams kind of struggled midway through,” Longing said. “We were able to hit a few shots towards the end that kept us in it, but we just came up a possession short.

“I can tell you, there were a lot of tired kids on the floor at the end, both teams.”

West had three sophomores on the court during overtime, including Anderson, who started the extra period with his fifth three-pointer, in front of the Wolverine bench.

“We practice the catch-and-shoot every day, so fortunately, I was able to hit some,” Anderson added with a smile and a shrug.

Another three from Lockhart put Conway back in the lead late in the first OT, only to see a putback by senior Jacob McGhee tie it again, 53-53, just before the buzzer.

Harris put the Wampus Cats back in the lead for a final time when he hit another three from the top of the key. From there, Buccino finished things off for the Wolverines.

“That took a lot out of us today, for both teams, but we all just kept working hard and fortunately came away with a win,” Buccino said. “But this was a huge confidence boost for us.”

White was proud of his young players, who continue to improve each time they take the court. He hopes they step up even more in Thursday’s quarterfinal matchup.

“We’re in a double-overtime game with three sophomores on the floor, and they really helped carry us out there,” White said. “So, it was great for our program to get a big tournament win, especially with so many young guys. Now, we will go home and rest up, and get ready to play again Thursday.