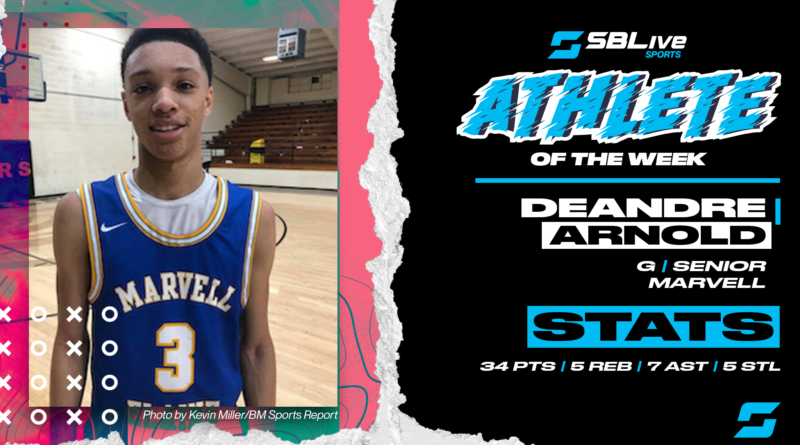 Arnold received 36.68% of the vote, beating out Monticello’s Nick Smith, who finished with 24.22%. Bryant’s Kade Ruffner finished third with 19.8% and Mountainburg’s Ethan Gregory finished fourth with 9.99%. There were over 72,000 votes tallied this week!

Joseph Bell, Little Rock Mills: The senior guard scored 15 of his 21 points in the first half of an 84-42 romp of eStem on Tuesday.

Landon Glasper, Fayetteville: The junior shooting guard led all scorers with 25 points Tuesday in a 62-61 win in four overtimes against Rogers.

Kylin James, Dumas: The senior guard, a University of Central Arkansas football signee, contributed 18 points and five rebounds in a 75-66 win against Drew Central on Tuesday.

C.J. Johnson, Booneville: The sophomore guard drilled 5 of 6 three-point attempts on his way to a game-high 21 points in a 77-41 victory against Danville on Tuesday.

Landin Kizer, Fountain Lake: The junior power forward poured in 23 points in Tuesday’s 56-36 win against Bauxite. On Thursday, he dropped in 20 points in a 65-38 trouncing of De Queen.

Jaylen Lee, Bentonville: The sophomore guard led the Tigers with 18 points in an 82-50 win against Rogers Heritage on Friday.

Nick Smith, Monticello: The senior guard, who was also a standout two-way football player for the Billies, totaled 26 points, six rebounds and three assists in a 64-58 win against Star City on Tuesday.

D.J. Townsend, Baptist Prep: The senior combo guard pumped in a game-high 20 points Tuesday in a 70-41 thrashing of Perryville.