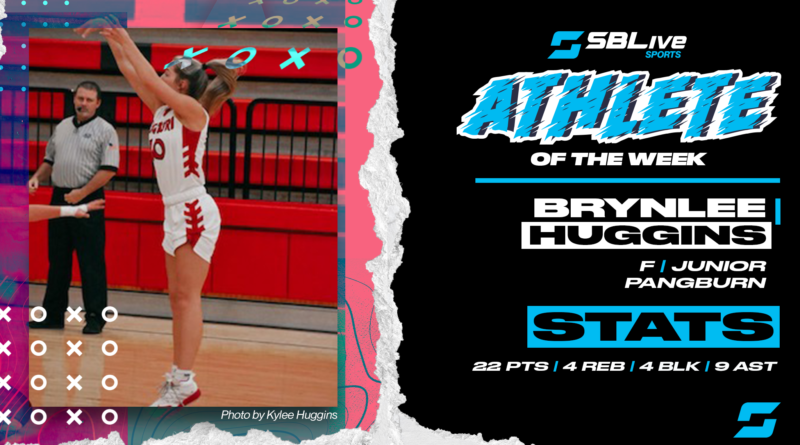 The junior forward totaled 22 points, nine assists, four blocks and four rebounds in a 65-43 win against Bald Knob on Tuesday.

Huggins received 45.77% of the vote, beating out Life Way Christian School’s Abby Moseley, who finished with 38.26%. Episcopal Collegiate’s M.J. Janes finished third with 6.91% and Bryant’s Brilynn Findley finished fourth with 2.6%. There were over 94,000 votes tallied this week!

Kiley Alman, Norfork: The sophomore forward had 23 points in a 63-51 win against Concord on Friday.

Kate Cheek, Cotter: The junior forward, who also is a standout volleyball player, had 24 points Tuesday in a 66-48 win against Alpena.

Sheridan Cross, Little Rock Christian: The junior small forward had 22 points to propel the Warriors to a 56-46 home win over Benton on Tuesday.

Kia Davis, eStem: The freshman scored 19 of her 21 points in the first half of a 73-21 victory over Little Rock Mills on Tuesday.

Cheyanne Kemp, Morrilton: The sophomore stuffed the stat sheet with 25 points, four assists and three rebounds in a 56-45 win at Pottsville on Friday that kept the Devil Dogs perfect in conference play.

Pacious McDaniel, Har-Ber: The sophomore forward had 34 points Tuesday in a 58-51 win against Rogers Heritage. On Friday, she scored nine of her game-high 23 points in the first quarter as Har-Ber ran past city rival Springdale, 69-35.

Shylee Morrison, Gravette: The senior guard poured in a team-high 24 points Friday in a 59-47 win against Farmington.

Abby Moseley, Life Way Christian School: The senior forward, who is averaging 19.3 points per game, moved past 1,500 points for her career. Moseley’s big night came Friday, when she exploded for 32 points, including converting on 12 of 15 free throw attempts, in a 51-42 win against Yellville-Summit. She chipped in 12 points in Monday’s 57-19 blowout of Decatur.

Jill Nutt, Bigelow: The senior combo guard scored 20 of her 22 points in the first 10 minutes of a 66-18 rout of Maumelle Charter on Tuesday.

Kara Ponder, Bergman: The junior guard’s 17 points fueled a 75-15 rout of Greenland on Friday that gave the Panthers their 26th consecutive win.

Jersey Wolfenbarger, Fort Smith Northside: The senior guard poured in 32 points in Tuesday’s 73-54 home win against Bryant. Wolfenbarger added 33 points, including 22 in the first half, in a 70-62 win against Little Rock Central three nights later.