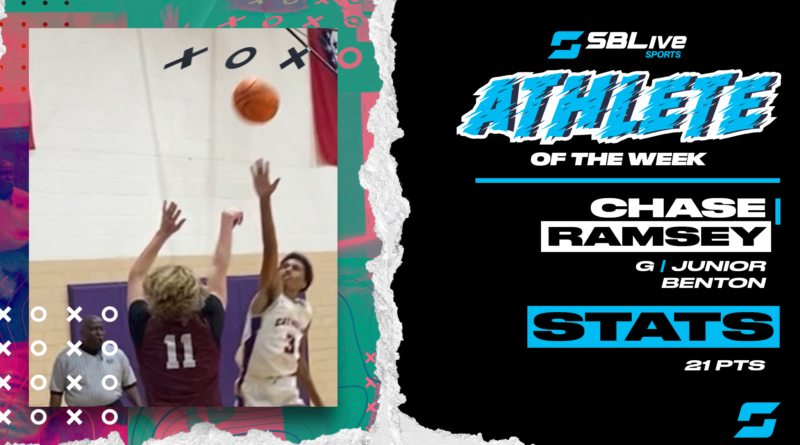 Ramsey scored a career-high at Benton with 21 points, 5 three-pointers and two fast break layups in the Panthers’ game against Maumelle.

Ramsey received 35.97% of the vote, beating out Rector’s Cooper Rabjohn, who finished second with 28.35%. West Memphis’ Jordan Mitchell finished third with 24.28% and Fountain Lake’s Colby Lambert finished fourth with 8%. There were over 30,000 votes tallied this week!

Here are the other athletes who were nominated for Jan. 25-31:

Aidan Burns, Mammoth Spring: The freshman guard had a game-high 27 points in the Bears’ 79-44 win over Crowley’s Ridge Academy on Tuesday.

Carl Daughtery Jr., Maumelle: The junior guard had 18 points as Maumelle held on against Benton for a 68-65 overtime win Tuesday, improving to 4-0 in the 5A-Central Conference.

B.J. Gilliam, Mayflower: The junior guard scored 21 of his game-high 27 points in the second half of a 78-55 blowout of Lamar on Friday.

Landon Glasper, Fayetteville: The junior guard had 32 points Friday in a 67-65 win against Bentonville West.

Hykeem Hancock, Barton: The senior guard has lit up the scoreboard lately, averaging 26.3 points per game last week. He averaged 11.3 rebounds and dished out 5.3 assists per game. His best effort came Friday in a 69-57 victory over McCrory in which he totaled 30 points, 12 rebounds and six assists.

Rece Hipp, Rose Bud: The sophomore point guard paced the Ramblers with 22 points in a 59-53 victory against Bald Knob on Thursday.

Colby Lambert, Fountain Lake: The sophomore guard drilled seven three-pointers on his way to 24 points in leading the Cobras to a 48-38 win against Nashville on Friday.

Jordan Mitchell, West Memphis: The senior guard had a game-high 21 points and dished out five assists in a 57-52 loss at rival Marion on Friday.

Joseph Pinion, Morrilton: The star junior and top recruit pitched in 17 points Tuesday in a 70-44 rout of Heber Springs. Pinion added 15 points and seven rebounds in a 63-38 rout of Dardanelle on Friday.

Cooper Rabjohn, Rector: The freshman guard scored a game-high 23 points as Rector cruised to a 68-45 victory against Riverside on Tuesday.

Brandon Scott, Charleston: The sophomore guard helped the Tigers avenge a loss to Cedarville by pouring in a game-high 41 points in a 72-58 win Tuesday.

D.J. Smith, North Little Rock: The senior guard scored 15 of his 24 points in the second half of a pivotal 58-50 win against Bryant in 6A-Central play Tuesday. Smith added 18 points in a 72-34 rout of Cabot three nights later.

Cameron Wallace, LR Parkview: The junior swing man made two key free throws with less than 10 seconds remaining to seal a 75-72 win at Sylvan Hills on Tuesday. Wallace finished with a team-high 21 points.

CJ Williams, Fayetteville: The senior guard made a layup as the buzzer sounded to give the Bulldogs a 67-65 6A-West win against Bentonville West on Friday. Williams finished with 10 points.