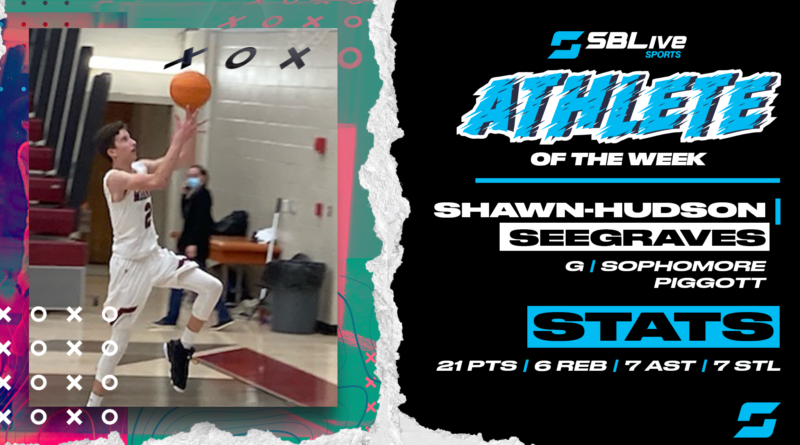 The sophomore guard dropped 25 points with five rebounds, two assists and two steals in the Mohawks’ 75-74 overtime loss to Gosnell on Tuesday, Jan. 19. He totaled 21 points, seven assists, seven steals and six rebounds in an 88-59 blowout of Harrisburg on Friday, Jan. 22.

Seegraves received 52.58% of the vote, beating out Barton’s Hykeem Hancock, who finished second with 28.97%. Texarkana’s Nick Watson finished third with 8.25% and Lake Hamilton’s Zac Pennington finished fourth with 3.96%. There were over 55,000 votes tallied this week!

Caleb Faulkner, Izard County: The senior forward poured in 30 points in the Cougars’ 77-55 win against Calico Rock on Friday.

Derrian Ford, Magnolia: The junior forward recorded 26 points, five steals and five rebounds in a 92-59 win against Camden Fairview on Tuesday. He led the Panthers with 23 points, seven rebounds, five steals and four assists in a 73-32 drubbing of Hamburg three nights later.

Colby Garland, Magnolia: The junior guard torched Camden Fairview for 28 points while dishing out four assists and grabbing three rebounds in Tuesday’s 92-59 win. He had 21 points, five rebounds and three assists in the Panthers’ 73-32 victory against Hamburg on Friday.

Landon Glasper, Fayetteville: The junior guard exploded for 26 points in the Bulldogs’ 61-48 6A-West home win against Rogers Heritage on Friday.

Hykeem Hancock, Barton: The senior forward turned in one of the most impressive performances of the season Friday, torching defending Class 2A champion England for 53 points while grabbing 15 rebounds and dishing out five assists on the road in the Bears’ 73-69 victory.

Lamont Jackson, Blytheville: The rangy, lefty senior point guard poured in 22 points as the Chickasaws notched their seventh consecutive victory with a 62-41 pounding of Highland on Friday. Jackson contributed 15 points in a 68-52 win against Valley View three nights earlier.

Daylen Love, Osceola: The junior forward racked up 25 points, 10 rebounds and three blocks in an 87-84 win against rival Rivercrest on Friday as the Seminoles moved to 10-0 in the 3A-3 Conference.

Keyln McBride, Jonesboro: The senior guard had a game-high 17 points in the Hurricane’s 64-38 win against Marion on Friday.

Jordan Mitchell, West Memphis: The senior guard enjoyed a huge night Tuesday with 30 points, eight rebounds, five assists and four steals in the Blue Devils’ 68-51 win at Greene County Tech. He poured in 21 points and handed out six assists in a 73-46 home win against Batesville on Friday.

Zac Pennington, Lake Hamilton: The sophomore shooting guard paced the Wolves with 24 points and eight assists in a 72-65 5A-South victory against El Dorado on Friday.

DJ Smith, North Little Rock: The senior guard lit up Bryant for 18 fourth-quarter points on his way to a 34-point night in the Charging Wildcats’ 72-64 road win Tuesday.

Cameron Wallace, Parkview: The junior forward had 22 points and 11 rebounds as the Patriots rolled past Beebe 79-48 on Tuesday. He tallied a game-high 21 points in a 79-50 blasting of Benton on Friday.

Elliott Wessels, Shiloh Christian: The senior forward had the winning basket on his way to 17 points as the Saints escaped Pea Ridge with a 48-47 victory Friday. Wessels added six rebounds and four steals.