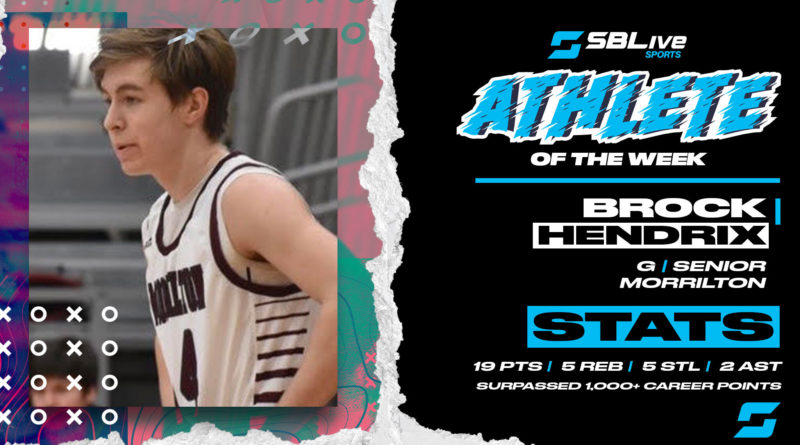 The senior guard surpassed the 1,000-point milestone for his career with 19 points in a 59-49 win over Subiaco Academy on Friday night.

Hendrix received 54.96% of the vote, beating out Bentonville West’s Riley Buccino who finished second with 32.28%.

Caleb Blakely, Farmington: The sophomore guard chipped in 16 points and some key free throws down the stretch in the Cardinals’ 63-58 4A-1 Conference home win against Huntsville on Friday night. He pulled down 15 rebounds in Saturday’s 77-68 victory against Berryville.

Riley Buccino, Bentonville West: The junior shooting guard scored 15 of his game-high 21 points in the first half of a 57-50 win against Har-Ber on Friday night that give the Wolverines back-to-back 6A-West Conference victories.

C.J. Delancy, Valley View: The senior forward scored seven of his 18 points in the fourth quarter to fuel the Blazers’ 49-37 4A-3 Conference home win against Highland on Friday night. He added eight rebounds and seven blocked shots.

Spencer Honeycutt, Westside: The junior guard nailed four three-pointers and finished with 21 points in a 64-44 win Saturday night against Batesville Southside as the Warriors notched their first 4A-3 victory of the season.

Brian Jones, Blytheville: The senior small forward hit the second and third free throws after being fouled on a three-point attempt with one second remaining, allowing the Chickasaws to escape with a 50-49 win over Brookland on Monday night and giving them a leg up in the 4A-3 Conference race. Jones totaled 14 points in the game.

Jay Jones, Bay: The senior guard exploded for 29 points in a 55-54 home loss to Buffalo Island Central on Friday night.

Jesse Kinard, Buffalo Island Central: The senior guard poured in a game-high 30 points Friday night in a 55-54 win over Bay in 2A-3 Conference play.

Chris Littleton, Osceola: The senior forward drilled six three-pointers and totaled 21 points in a 68-56 3A-3 Conference win at Manila on Tuesday night.

Doss McDaniel, Ridgefield Christian: The freshman guard hit seven of his nine three-pointers in the third quarter on his way to 35 points in a 91-48 win against Hillcrest in a 1A-3 Conference game Tuesday night. According to the 2018-19 Arkansas Activities Association record book, McDaniel’s seven threes in a quarter broke the record of six held by West Fork’s Josh Farrell (2012) and St. Joe’s Brady Willis (2014).

Austin Meyers, Vilonia: The junior shooting guard, also a quarterback commit to the University of Kansas, had 22 points in the Eagles’ 52-49 victory over Greenwood on Friday night. The win moved Vilonia to 3-1 in the 5A-West Conference.

Jayden Shannon, Tuckerman: The senior shooting guard poured in 23 points Tuesday to fuel the Bulldogs’ 54-50 win against Cedar Ridge. Tuckerman avenged its only 2A-2 Conference loss of the season.

Layne Taylor, Farmington: The freshman guard led all scorers with 25 points in a 63-58 4A-1 Conference home win against Huntsville on Friday night. He was even better Saturday, scoring 34 points with six rebounds in a 77-68 victory against Berryville.

Bryson Warren, Little Rock Central: The sophomore guard torched Cabot for 37 points in a 79-59 victory Friday night. On Tuesday, Warren scored 15 of his 26 points in the second half of a pivotal 67-64 road win against Bryant.

Jayden Williams, Conway: The senior forward had 18 points and 13 rebounds in a 52-50 home loss to Fort Smith Northside on Friday night.