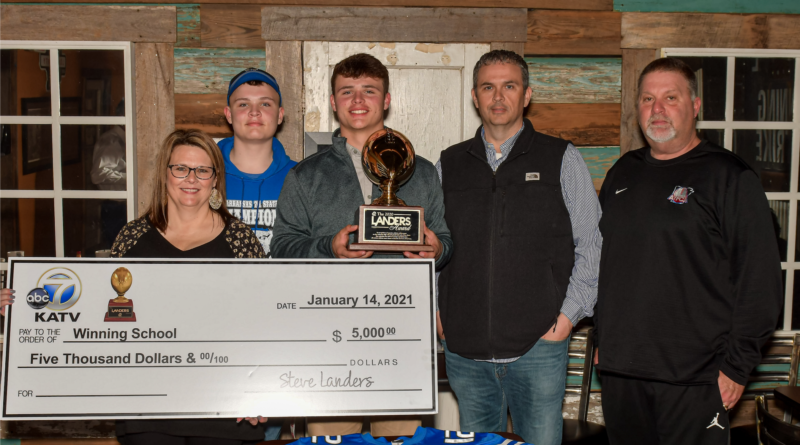 With family and friends surrounding him, Bryant senior Austin Ledbetter got caught up in the moment.

He and nine other Landers Award finalists waited on pins and needles via a Zoom call for Thursday’s announcement on live television of the winner of Arkansas’ top high school football honor. Ledbetter hung his head and closed his eyes. Hornets coach Buck James, sensing his quarterback’s emotion, gently patted him on the leg.

“I think with all of the people here … (the other finalists) were doing it at their home and him having a big party here, the pressure of, ‘What happens if I don’t win?’ sort of got to him a little bit,” James said.

“He’s a big-time player in big-time games, and this is the way it should have been with family and friends. It gave him an opportunity to share this with his teammates.”

A few seconds later both were smiling and the crowd at Lost Pizza Company in Bryant cheered as former Arkansas quarterback and 2007 Landers winner Tyler Wilson, along with KATV sports director Steve Sullivan, announced Ledbetter had won the award.

Ledbetter’s parents and brothers, several other family members and friends, and Bryant teammates and coaches gathered in a private room to watch the ceremony and look on as a KATV camera crew recorded Ledbetter’s reaction.

“Having all of my family here was a blessing,” Ledbetter said. “I couldn’t have done it without them. I’ve lived (in Bryant) my entire life. I know almost everybody. For a bunch of my family and friends to come out and support me for this award meant a lot to me.”

Ledbetter rewrote all kinds of history and records at Bryant while leading the Hornets to their first state title as a sophomore and then helping them claim two more championships and notch a school-record 30 consecutive wins. Ledbetter, a Landers finalist last year, is the first Bryant player to win the award. As a senior, he passed for 3,086 yards with 41 touchdowns and just five interceptions.

“I think the community of Bryant deserves this,” James said. “Saline County deserves this. This is a big honor, and this gives the younger kids something to shoot for and grow up and say, ‘I want to be like this and grow up and win this award.’ It gives you a chance to see what success looks like from doing it the right way.”

While Ledbetter winning the award wasn’t a surprise to most, what he said about his future plans might be surprising to Arkansas fans. He’s been committed to Dave Van Horn’s UA baseball program since he was a ninth-grader. As he has achieved more and more football success, however, Ledbetter has decided he wants to play football for the Razorbacks. With Hogs coach Sam Pittman’s blessing, Ledbetter said he’s planning to report to fall football camp in August.

“(Football) is definitely something I want to do,” Ledbetter said. “It’s up to Coach Pittman — it’s in his hands. It’s been a conversation, and I really want to go play football at the University of Arkansas.”

James said he has talked with Pittman and is optimistic Ledbetter can make an impact on the Hogs football team.

“I think he can do very, very well,” James said. “I honestly believe, it comes natural to him, and the defenses move slow, and he is a winner, and he can find people open. I think he can be a star at the University of Arkansas playing football.

“I think he will be as good as anybody across the country they can get.”

Ledbetter said Van Horn is fine with the change of plans.

“(Van Horn) is all in,” Ledbetter said. “He told me my freshman year that he was all for multi-sport athletes.”

Former Greenwood quarterback and 2017 Landers Award winner Connor Noland set out to play both sports at Arkansas, but after a season of football, he opted to focus on baseball — which has worked out well for him, as he has become the Hogs’ ace.

“Nowadays a guy really can’t do both,” said James, formerly a high school baseball coach and professional scout. “You have to decide on one or the other and be out there for spring football. For them to do it halfway isn’t fair to the programs.

“I think it boils down to what Austin wants and if Coach Pittman thinks he’s good enough to play, then I think there will be an opportunity given to him. There’s not going to be a better quarterback that has done what he’s done in high school that has gone up there, and you look at the (quarterbacks from Arkansas) that have played up there, like Tyler Wilson, Brad Taylor and Matt Jones — the list is long, and I think this guy is that guy in this particular time and period and can go up there and do that job.”

As is tradition, KATV also handed out the Paul Eells Award, named after the longtime KATV sports anchor and radio voice of the Razorbacks and given to a player who shows extraordinary character. Fayetteville junior quarterback Bladen Fike won the award for his grace after his premature kneel at the end of a Class 7A quarterfinal cost the Bulldogs a win. The clip went viral on the internet and Fike took a great deal of criticism from many, including Pro Football Hall of Fame receiver and ESPN analyst Randy Moss, who criticized Fike during his “C’mon Man” segment before Monday Night Football the following week.

“I took it as motivation to go out there next year and win a state championship and show them what I have and what our team can do,” Fike told the television audience. “This is the first time this has ever happened. I’ve never made a mistake this big. I knew I was way better than that and our team is way better than that, and I had a lot of help from friends, coaches and (Fayetteville coach Casey Dick). They said, ‘I’ve got your back.’

Also, the Scott Landers Memorial scholarship was awarded to Pulaski Academy senior linebacker Futa Shinkawa. Scott Landers is the late son of Steve Landers, the Little Rock auto magnate and a co-creator of the Landers Award. The Landers family chooses one player each year who exemplifies the spirit Scott Landers showed as a PA player.

Shinkawa, who is undersized for a linebacker at 5-foot-8 and 151 pounds, racked up 124 tackles with 21 tackles for loss, 6.5 sacks and three interceptions.

Soon after Ledbetter was announced as the winner of the night’s top award, he took special care to bring in his family to appear in the shot as he was interviewed by Sullivan. A young man with autism — also named Austin — whom Ledbetter has befriended also joined.

It was clear that Ledbetter credits many people for his success and wanted to make sure he shared it with them Thursday night.

“The Landers Award, to me, is a team award,” Ledbetter said. “I couldn’t have done it without them. To have my family and friends and a bunch of people show up, it just meant so much.”