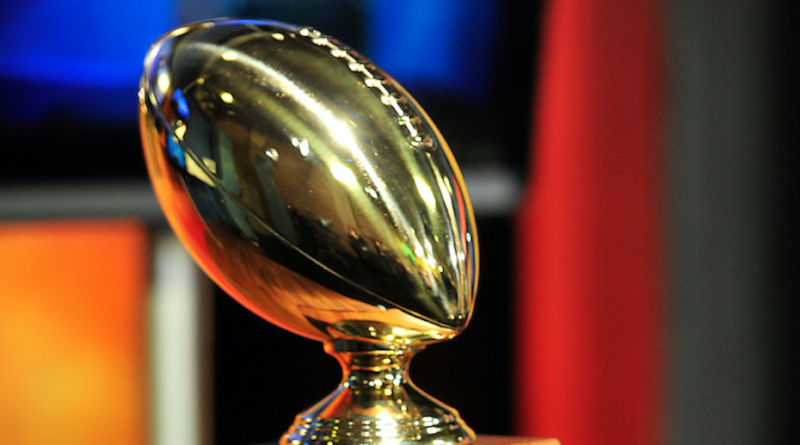 It quickly became the state’s premier award, with its shiny trophy, ring and 30-minute, live-television special airing on KATV.

Sullivan, who is extremely passionate about high school football, takes great care in selecting weekly candidates that he highlights on his newscasts. He then leaves it to a group of media who cover high school football to vote among the pool of weekly winners for the year’s top award.

I’ve been honored to be among that group for several years and I take my responsibility as a voter very seriously, watching many of the players in person and pouring over game film and other highlights in preparation to make my selection.

This year’s Landers show is Thursday at 6:30 p.m. on KATV and marks the 20th anniversary of the award. The COVID-19 pandemic will make it the most unique ceremony yet, as it will be done through Zoom with no honorees at the KATV studio.

As the Landers Award approaches a milestone, I wondered: Who are the best players to win the award?

Below is a ranking of all the past winners. The criteria are based on the year they won the award and not what they did or didn’t accomplish after high school. Statistics, the strength of that year’s field and team success were taken into consideration.

1. Darren McFadden (Pulaski Oak Grove, RB; 2004) – McFadden probably is in the conversation for the greatest Arkansas prep football player ever, along with Pine Bluff running back Basil Shabazz. The University of Arkansas Hall of Fame running back easily tops this list.

2. Damian Williams – (Springdale, WR; 2005) – What was most interesting about Williams’ win is that he beat out teammate Mitch Mustain, a Parade All-American quarterback. That might have been a controversial decision, but Williams, who signed with Arkansas and later played at USC, was so electric at receiver that voters gave him the nod.

3. Michael Dyer (Little Rock Christian Academy, RB; 2009) – Dyer was so impressive as a four-year starter that an argument could have been made for him beating out Pulaski Academy quarterback Spencer Keith when Dyer was a junior in 2008. No player has won the award twice; Dyer probably came the closest.

4. Peyton Hillis (Conway, RB; 2003) – The battering ram of a back who pulled pickup trucks down the street in the offseason was an obvious pick. Hillis became a star at Arkansas and eventually graced the cover of the Madden video game as a member of the Cleveland Browns.

5. Brandon Allen (Fayetteville, QB; 2010) – Although Fayetteville fell short in the Class 7A state title game, the Razorbacks signee won the award over Shiloh Christian quarterback Kiehl Frazier, who led the Saints to a Class 4A state championship and had committed to Auburn.

6. De’Arrius Howard (West Memphis RB; 2000) – The debut winner, the Arkansas commit was an easy choice after running all over opponents on his way to a four-star recruiting rating. He is the only award winner from east Arkansas.

7. Tyler Wilson (Greenwood, QB; 2007) – Part of a long list of great Greenwood quarterbacks, the eventual Hogs star won a state title and became the first of three Bulldogs (and two QBs) to win the award.

8. Ty Storey (Charleston, QB; 2014) – The only 3A player to win the award, Storey was a convincing choice after leading the Tigers to a 14-0 championship season and being courted by the nation’s top college programs before settling on Arkansas.

9. Fredi Knighten (Pulaski Academy, QB; 2011) – Pulaski Academy has had its share of prolific quarterbacks, but Knighten might have been the most exciting to watch. He was almost as good with his feet as his arm in leading the Bruins to the Class 5A state title.

11. Reid McKinney (Warren, QB; 2001) – The second award winner helped the Lumberjacks beat Booneville in the 2001 Class 4A state final — he played some at linebacker in that game and in others during the season. His career at Arkansas State was cut short because of injury. McKinney is the only player from the tradition-rich school to win the award.

12. Drew Morgan (Greenwood, WR; 2012) – The future Razorbacks star cemented the award by capping his senior season with MVP honors in the Class 5A state final. He and Williams are the only wide receivers to win the Landers.

13. Connor Noland (Greenwood, QB; 2017) – In what likely was a very close vote, Noland beat out Pulaski Academy quarterback Layne Hatcher after guiding the Bulldogs to the Class 6A state title. He committed to the Razorbacks football team before deciding to focus on baseball.

14. A.J. Whitmore (Nashville, 2006; QB) – Whitmore finished his illustrious career at Nashville with a 41-2 record as the starting quarterback and won a second consecutive Class 4A state title before signing with Tulsa and enjoying a solid career as a Golden Hurricane receiver.

15. Landon Leach (Russellville, QB; 2002) – Leach passed for more than 9,000 yards for the Cyclones. He’s known best for winning the third Landers Award and going to Arkansas as a three-star recruit but never playing a down thanks to two major injuries.

16. Jacolby Criswell (Morrilton, QB; 2019) – Criswell, who had committed to North Carolina, wowed voters with his ability to run and pass. He was able to put Morrilton on his back.

17. Taylor Powell (Fayetteville, QB; 2016) – The Missouri commit directed the Bulldogs to the Class 7A state championship.

18. Spencer Keith (Pulaski Academy, QB; 2008) – Keith stands with Knighten atop a lengthy list of impressive Bruins passers. He won a state title, received the Landers Award and earned a Division I scholarship to Toledo.

19. Ladarius Skelton (Pine Bluff, QB; 2015) – Skelton, a senior starter at Southern last fall, capped a dominant high school career as a Zebra with a victory in the state final (his third appearance in the game) and a title game MVP award.

20. Zach Launius (Cabot, RB; 2013) – He’s the only honoree other than Hill, who pursued college basketball, who didn’t at least begin a college football career, but the voters got it right by honoring Launius. The undersized fullback rumbled for more than 2,000 yards and helped lead the Panthers to an improbable trip to the 7A state championship game.