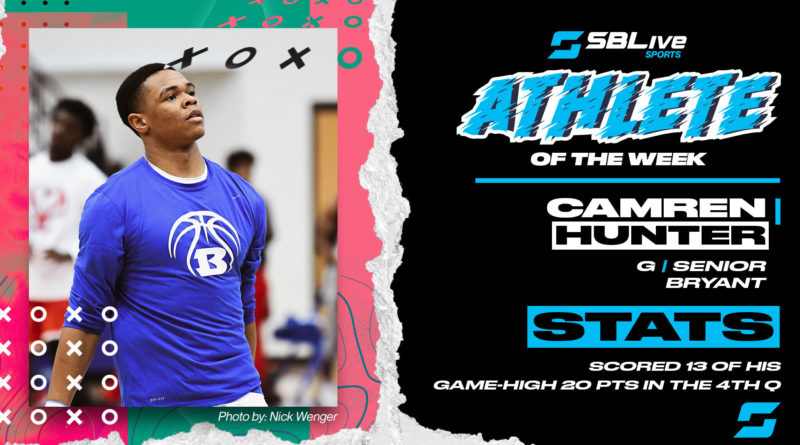 Hunter, a senior guard and a Central Arkansas commit, scored 13 of his game-high 20 points in the fourth quarter on Dec. 22 to help the Hornets pull away for a 61-47 victory against Watson Chapel.

Hunter received 38.38% of the vote, beating out Little Rock Parkview’s Jaylen Thomas-Miller who finished with 25.04%. Little Rock Christian’s Riley McGuirk finished third 15.15% and North Little Rock’s DJ Smith was fourth with 13.33%. There were over 27,000 votes tallied this week!

We are currently accepting Athlete of the Week nominations for the week of Jan. 4-10. If you would like to nominate an athlete, please email regan@scorebooklive.com or tag us on Twitter or Instagram at @sbliveark.

Jaylen Lee, Bentonville: The sophomore guard had a game-high 18 points Tuesday in the Tigers’ anticipated showdown with North Little Rock, but the Charging Wildcats edged Bentonville, 53-51.

Jaylen Thomas-Miller, Little Rock Parkview: The junior guard had a game-high 17 points Tuesday to lead the Patriots to an 85-73 victory over West Memphis.

Miles Rolfe, Har-Ber: In a defensive battle, Rolfe — a 6-foot-1 junior — led all scorers with 11 points as the Wildcats fought off Cabot for a 53-24 victory Tuesday.

Riley McGuirk, Little Rock Christian: The junior shooting guard knocked down a three-pointer from the corner with three seconds remaining to lift the Warriors to a 54-52 win over Jonesboro on Tuesday.

Bryson Warren, Little Rock Central: In a showdown between defending 6A and 5A champions, the sophomore guard led the 6A Tigers to a 70-56 win over Jacksonville on Monday with 27 points, eight rebounds and six assists.

Cody Robinson, Little Rock Central: Robinson, a junior guard, nailed four three-pointers in the Tigers’ 70-56 win over reigning 5A champion Jacksonville — including three in a row during a 9-0 run that sealed the victory. He finished with 18 points and three rebounds.