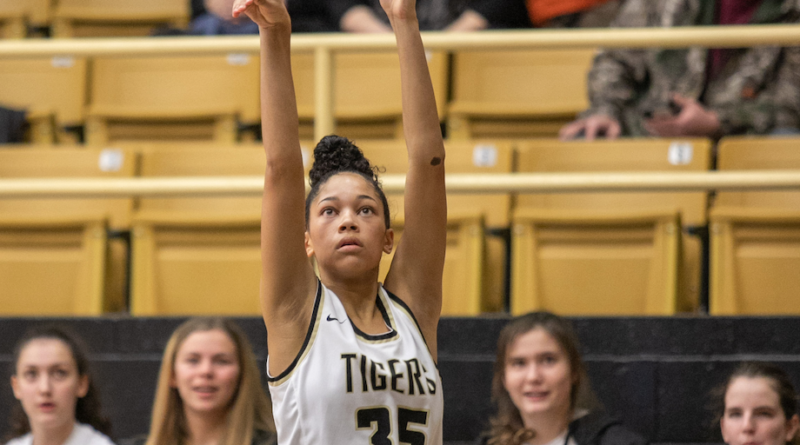 Over the next few weeks, SBLive Arkansas will break down every 6A boys and girls basketball team in the state entering the 2020-21 season. Here’s our look at the Bentonville Tigers girls.

A five-star prospect and the No. 13 player in ESPN’s Class of 2021 national recruiting rankings, Dauda is an athletic post who is a force on both ends of the court. The Baylor signee didn’t take up basketball until the sixth grade and averaged 16.6 points, 8.2 rebounds and 2.6 blocks per game as a junior. “She can pretty much do it all,” Halbmaier said. “Defense, offense, and she has the ability to be able to score at any spot on the floor.”

Brown averaged 10 points per game last season as one of the state’s top sophomores. In October, the shooting guard gave an oral commitment to Rice. “She’s the type of kid that can stroke it from anywhere and get to the rim,” Halbmaier said. “She also has a high basketball IQ.”

Hayes is another strong athlete who can shoot from distance and attack off the dribble. The University of Arkansas–Fort Smith commit will be the third guard in Bentonville’s offense. “She’s a spitting image of Jada — she can score and get to the rim,” Halbmaier said. “They complement each other very well.”

Bentonville won its final 22 games of the 2019-20 season, culminating in an 81-59 victory over Conway in the state semifinals. Because of the COVID-19 pandemic, the Tigers had to settle for a share of the title as the championship game between Bentonville and 6A West rival Fayetteville was canceled.

Key contributors and all-state selections Natalie Smith (John Brown) and Bella Irlenborn (Southwest Baptist) have moved on to college basketball, but the Tigers have more than enough key pieces in place to reach a third consecutive state final.

Dauda, rated the No. 1 senior post in the country by ESPN, is arguably the state’s most dominant player. Brown and Hayes are talented guards with big-game experience, and Kadie Kultgen and Gracie Eaves also project to be major contributors.

“We want to continue to have balanced scoring from top to bottom,” Halbmaier said. “I like to have six or seven players average eight to 12 points per game. We have balance, share the ball and play well together.”

Halbmaier listed defense as Bentonville’s biggest strength entering the season. The Tigers surrendered an average of 37.3 points per game last winter, one of the state’s top marks.

“Our girls do a really good job of getting out on defending the perimeter players because three-point shooting has really improved, and for a lot of teams that’s a huge part of their offense,” Halbmaier said.

With Dauda and a few talented guards returning, Bentonville has an excellent chance to make it back to the final and claim an outright championship this winter.

“Our goal, of course, is to win the conference, get to the state tournament and do the best we can and make the most of it,” Halbmaier said.

“Overall, I think the team chemistry is really good on this year’s squad. They do a great job of supporting one another and playing hard for each other. I’m looking forward to coaching them.” — Tom Halbmaier