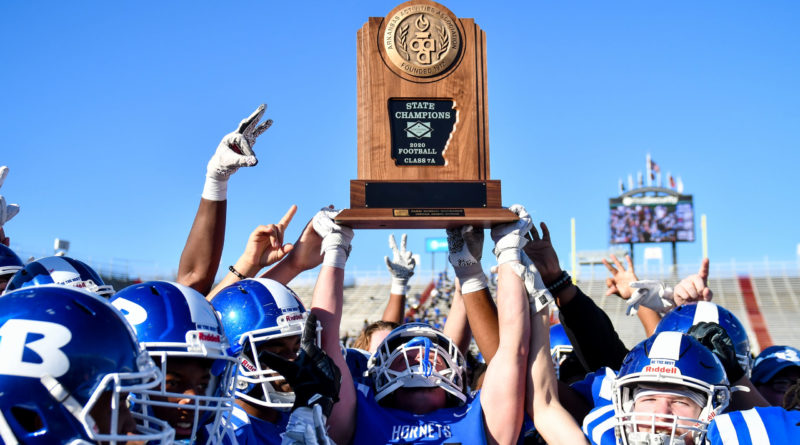 Bryant won its third consecutive 7A championship by beating North Little Rock 27-17. The Hornets have won 30 games in a row.

North Little Rock was the only team from Arkansas to play Bryant close this season and for that, the Charging Wildcats get the No. 2 spot. NLR’s two losses both came against Bryant.

The Bruins dominated this season, beating every Arkansas team they faced by at least two scores. They didn’t play a 7A opponent in 2020 — that would have been a fantastic barometer to see exactly how good their high-powered offense was this year. In the postseason, Pulaski Academy scored more than 50 points in each game.

Greenwood went undefeated to win the 6A title, earning the No. 4 spot. The Bulldogs beat Lake Hamilton 49-24 to clinch the 6A championship.

Even though Cabot had four losses this season, the Panthers beat Bentonville 38-34 in the 7A quarterfinals in a game Panthers fans will remember for the rest of their lives. That win gave them the No. 5 spot. In the semifinals, Cabot fell to North Little Rock, 49-42.

In a shocker, Bentonville lost 38-34 in the 7A quarterfinals to Cabot, which dropped the Tigers to the No. 6 spot in our final rankings.

Lake Hamilton’s two defeats this season came against No. 4 Greenwood in the regular season and in the 6A championship game.

The Saints won the 4A championship and none of their playoff games were particularly close. Their one loss came against Page (Oklahoma) in September.

Wynne’s perfect season came to an end in the 5A semifinals when the Yellowjackets fell to Pulaski Academy, 52-14.

Wins over Sylvan Hills and Benton push Catholic to No. 11 despite a sub-.500 record. The Rockets lost in the regular season to Fort Smith Northside and Jonesboro when the Hurricane still had star quarterback Cross Jumper. Their five other defeats came against teams ranked ahead of them.

Benton had to forfeit its first-round 6A postseason game because of COVID-19, which ended the Panthers’ season. Their best win came against Parkview, 30-20 on Oct. 9.

Sylvan Hills beat Russellville and Parkview in the 6A playoffs before falling to Lake Hamilton 21-20 in overtime in the semifinals. That playoff run moved the Bears to No. 13.

Parkview fell to No. 13 Sylvan Hills 7-0 in the second round of the 6A playoffs. The Patriots’ best win came against Van Buren.

LR Christian lost in the 5A state title game to Pulaski Academy, 64-27.

Rogers’ best win came against Har-Ber, 49-42 on Oct. 30. That victory gets the Mountaineers into the final Top 20.

Har-Ber’s loss to Fayetteville in the regular season was a head-scratcher, but the Wildcats’ playoff win over Fort Smith Northside clinched them a spot in the final Top 20.

Fort Smith Northside beat Catholic and Fayetteville in the regular season, but the Grizzlies’ 7A postseason defeat to Har-Ber puts Northside at No. 18 to end the year.

Harding Academy won the 3A championship with ease, beating every postseason opponent by at least 27 points. The Wildcats defeated McGehee 71-44 in the title game.

Fordyce’s 2A state championship puts the Redbugs at No. 20 to end the year. Fordyce won the title with a 35-32 victory over Des Arc.