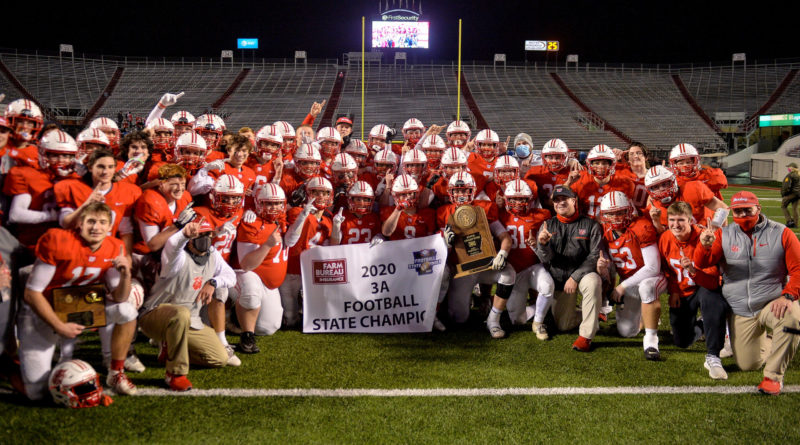 The Wildcats sealed the feat in spectacular fashion Saturday night at War Memorial Stadium, running past McGehee for a 71-44 victory in the Class 3A state final and breaking records for prolific offense in the process.

“For us to be able to do this back-to-back is a very difficult task, and you put the pandemic on top of that, and it makes it that much sweeter,” Harding Academy coach Neil Evans said.

The Wildcats have won eight state titles and five since 2002.

Harding Academy senior quarterback Caden Sipe earned the game’s Most Valuable Player award by completing 22 of 27 passes for 430 yards with eight touchdowns and an interception. The eight touchdown passes are a state final record.

Sipe, whose lone scholarship offer is from Henderson State University, also ran for a team-leading 113 yards and a touchdown.

“I don’t know if you could close out (a career) any better,” Evans said of his three-year starter. “I think one of the things that makes him so easy to root for is he has a 4.2 GPA, he’s got a 30 on the ACT, and he treats everybody he comes in contact with with respect and class.

“It could not happen to a better human being than him. He deserves every good thing that comes his way, so for him to put a cap on his career tonight the way he did, you couldn’t script it any better.”

Sipe tossed touchdown passes to four receivers, but his favorite target was classmate Ty Dugger, who caught 10 passes for 248 yards and four scores.

The 71 points the Wildcats racked up are the most in a state title game in the modern era. Stuttgart scored 73 points in 1945. The combined 115 points also are a championship game record.

“If you told me before the start of this game I could have 44 points, I would have taken that and been happy.”

Saturday’s game marked the sixth time teams have combined for more than 1,000 yards of offense in a state final.

Harding Academy led 35-14 at halftime. The closest McGehee got in the second half was 15 points when junior running back Jody Easter sprinted 80 yards for a touchdown on the Owls’ first possession of the third quarter. The Wildcats applied the 35-point sportsmanship rule with 9:15 left in the fourth quarter.

Sipe had secured his MVP award by the end of the first half. He helped the Wildcats (12-1) build the big first-half lead by completing 10 of 12 passes for 191 yards and three touchdowns. He rushed for 76 yards in the first half.

“(McGehee) was in man a lot, and when a team is in man, I like to look for Ty Dugger,” Sipe said. “He seems to always be open. We ran a bunch of pick plays, and I was looking at the rubs we could get and what man was falling behind on that play.”

The two big strikes were one-play drives to Dugger.

After McGehee scored for the first time midway through the second quarter, Sipe hooked up with Dugger on a 57-yard bomb.

With 1:41 to play in the half, Owls senior quarterback Jordan Owens, who passed for 248 yards and three touchdowns, plunged in from three yards, but after another short kickoff, Sipe and Dugger connected from 64 yards to give the Wildcats a 21-point lead with 1:24 to go in the half.

Sipe’s first touchdown was a 16-yard swing pass that junior Andrew Miller took 16 yards for an easy score with 10:52 left in the first quarter, putting Harding Academy up 7-0.

McGehee’s first possession ended with a punt, and Sipe capped a four-play, 79-yard drive with a 62-yard touchdown scamper untouched up the middle to grow the Wildcats’ lead to 14-0 with 7:35 remaining in the quarter.

On Harding Academy’s third possession, Kyle Ferrie, who made all of his extra points, missed a 45-yard field goal just to the left. The Owls took over on their 20-yard line and Dugger, who was second on the team with six tackles, promptly intercepted a pass by Owens and returned it 22 yards for a touchdown. Dugger intercepted another pass in the third quarter.

McGehee’s big highlight of the first half was a 48-yard pass from Owens to Easter to give the Owls their first score with 5:09 to play in the second quarter. Easter finished with 223 yards of offense and three touchdowns.

McGehee (12-1) suffered its first loss of the season. The Owls were gunning for the program’s eighth state title and first since 1999.

“I am so proud of these boys and what we accomplished this year,” Haddock said. “We didn’t get the last one and accomplish our ultimate goal. Somebody’s got to walk out of here a winner and somebody’s not. We understand the prize and what was at stake, and the kids played their tails off.

“Hats off to Coach Evans. They have a great group of kids and a great team. Tonight, they just beat us. Sometimes that happens.”