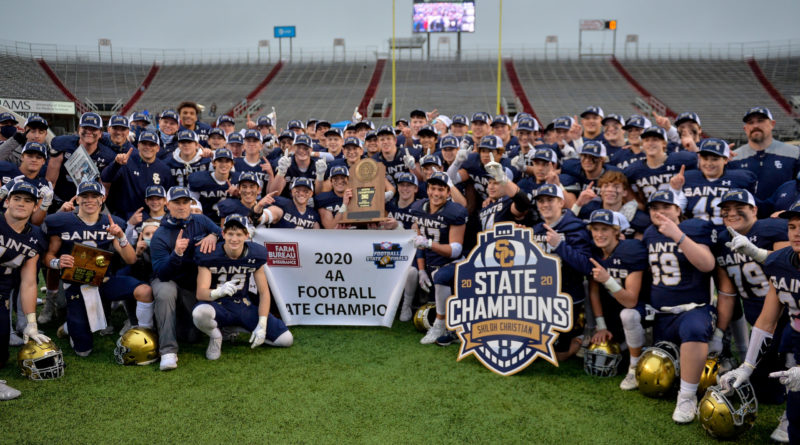 LITTLE ROCK — The Shiloh Christian Saints lost the championship game last year, and they’ve been on a mission ever since.

They scored on all five first-half possessions and set the tone early in a 58-20 win over Rivercrest on Saturday at Little Rock’s War Memorial Stadium for the Class 4A state title.

“That group we had last year was a special group with 24 seniors,” Saints coach Jeff Conaway said. “They’re part of the reason we won it this year. We’re so proud of those guys. We hate that we didn’t win it last year, but I really felt like that was a good, healthy motivator because they respected those seniors so much.”

The state title is the eighth for the program and first for Conaway, who is the fourth head coach to win a championship at the Springdale-based school, joining Gus Malzahn, Chris Wood and Josh Floyd.

Eli Wisdom, Jacob Solomon, Cam Wiedemann, Cooper Hutchinson and Kaden Henley scored touchdowns in the first half Saturday to lift the Saints to a 35-13 lead.

“It was great in the first half to go 5 for 5 on drives,” Conaway said. “Those were huge. We needed every one of them.”

Shiloh Christian won the coin flip and elected to receive rather than defer to the second half.

The Saints made the decision pay off with a 13-play, 63-yard drive capped by a 3-yard scoring run by Wisdom with 8:08 left in the opening quarter for a 7-0 lead.

The Saints took advantage of a 6-yard punt and went up 21-7 on the second play of the second quarter on Wiedemann’s 3-yard scoring run.

Rivercrest kept it close on Kam Turner’s 40-yard touchdown pass to Scott with 9:08 before halftime to trim Shiloh Christian’s lead to 20-13.

Ben Baker returned the ensuing kickoff 40 yards for the Saints, and Wisdom immediately hit Hutchinson for a 39-yard touchdown pass and a 28-13 lead with 8:50 left in the half.

Hutchinson ended Rivercrest’s next drive with an interception on a pass across the middle at the 1.

Shiloh Christian went on another methodical scoring drive, going 84 yards on 14 plays over four minutes, 31 seconds, and scoring on a 2-yard burst by Henley with 1:19 left in the half for a 35-13 cushion.

Rivercrest tried to answer, but Shiloh Christian’s defense stopped Scott at the 1 as the half expired.

The Colts opened the second half by losing a fumble on the kickoff, and Shiloh Christian capitalized quickly.

After Braden Tutt’s recovery, Wisdom hit Wiedemann on the first play for 41 yards and a touchdown just 17 seconds into the third quarter.

“If you don’t score with them, you’re going to have a hard time,” Rivercrest coach Johnny Fleming said. “We had a chance right there at the end of the first half to (get) back with them. If we do that, and then we don’t fumble the kickoff to start the second half … ”

The Saints’ defense turned back another threat by Rivercrest after Jaylan West returned an onside kick to the 9. Four plays later, the Colts turned the ball over for another defensive stand by Shiloh Christian.

The Saints went 91 yards in 10 plays to apply the Arkansas Activities Association’s Sportsmanship Rule, which runs the clock continuously with at least a 35-point lead, on Wisdom’s 7-yard scoring run with 7:37 left in the third quarter for a 49-13 lead.

“In the second half, our linemen were the difference,” Conaway said. “They leaned on them and opened up some run lanes.”

“We ran the football extremely well,” Conaway said. “We wanted to run the football. We’ve got a great offensive line. We felt like we could create some run lanes.”

Wisdom, Shiloh Christian’s sophomore quarterback, earned the Most Valuable Player award with 16 runs for 110 yards and three touchdowns and 239 yards passing with three touchdowns on 17-of-21 efficiency. His 80.9 completion percentage is tied for the highest in a state championship game with Warren’s Justin Gorman in 2014.

“He’s a stone-cold killer,” Conaway said. “He has the ability to take over games. He’s got such a knack for making plays with his legs and throwing the football down the field. There’s not anything he can’t do.”

Wisdom did not start Shiloh Christian’s preseason scrimmage at quarterback but was the starter by the opening game and ended up guiding an offense that led the state in scoring with 702 points.

“He earned the opportunity,” Conaway said. “We didn’t give it to him. We made him work for it. He’s grown tremendously.”

Rivercrest also had a record-breaking quarterback, but Turner was hobbled with an ankle injury and played sparingly in the second half. He finished with six carries for a yard and 166 yards passing with a touchdown.

“We were hoping it would be around 90 or 95 percent,” Fleming said. “He was probably about 60. The end of December, everybody is going to have those kinds of injuries. That wasn’t why we got beat.”

Turner finished the season with 3,039 yards and 38 touchdowns passing and 1,762 yards and 24 touchdowns rushing. He accounted for 121 offensive touchdowns in his career. He also had three fumble returns and a punt return for a score this season.

“He scores touchdowns in every phase of the game,” Conaway said. “He can run it, he can throw it, he can return it. It took us a few drives to adjust to their speed.”

Rivercrest finished with 346 yards but had just one touchdown in five drives inside Shiloh Christian’s 20.

“You can look at the scoreboard and see it didn’t turn out the way we wanted it to, but our kids played to the end,” Fleming said. “If you’re playing here on Christmas Eve, you’ve had a good football season.”