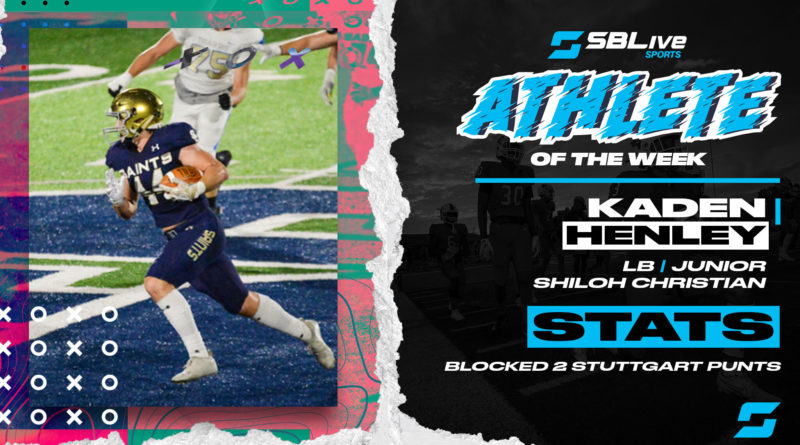 The junior blocked two Stuttgart punts — their first two punts of the game — to help the Saints cruise to a 56-7 win in the 4A semifinals.

We are currently accepting Athlete of the Week nominations for the week of Dec. 14-20. If you would like to nominate an athlete, please email regan@scorebooklive.com or tag us on Twitter or Instagram at @sbliveark.

And here are the other athletes who were nominated for Dec. 7-13:

Nolen Bruffett, Pulaski Academy QB: The senior quarterback earned the start for the Bruins on Saturday and threw for 271 yards and three touchdowns in their 64-27 win over Little Rock Christian.

Joe Himon, Pulaski Academy RB: Himon was named the 5A state championship game Most Valuable Player after rushing for 74 yards and three touchdowns and snaring six passes for 120 yards and a score.

Braden Tutt, Shiloh Christian LB: Tutt returned a fumble 63 yards for a touchdown in the Saints’ 56-7 win over Stuttgart in the 4A semifinals.

Cam Wiedemann, Shiloh Christian RB:Wiedemann rushed 10 times for 60 yards and four touchdowns in their 56-7 win over Stuttgart in the 4A semifinals.

Andrew Miller, Harding Academy RB: Miller rushed 13 times for 49 yards and a touchdown and caught 7 passes for 48 yards and another TD in their 35-7 win over Glen Rose in the 3A semifinals.